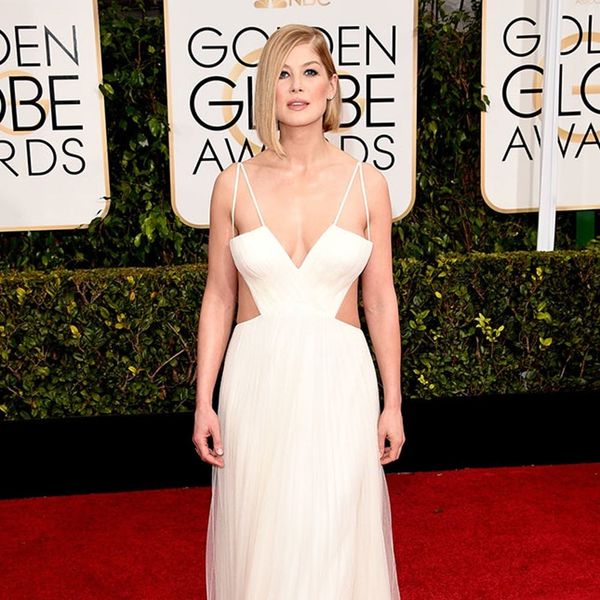 Another year, another slew of red carpet trends to discuss. Last night’s 72nd annual Golden Globes was flooded with looks we’re still drooling over a day later. From bright pops of yellow and red to bold design details, these trends not only hint at what we might see throughout the rest of award season, but also what we can expect to see on the street in 2015 (in a more more subtle fashion, of course). Here are 12 style trends we spotted at this year’s award show.

1. Ladies in White: This crisp and clean color was spotted all over the red carpet. While the color can easily look dull or basic, the stars spiced it up with neo-Grecian vibes, dramatic cut-outs and geometric silhouettes. (Photos via Jason Merritt /Getty)

2. Mellow Yellow: Summer is coming. There might still be snow on the ground in some parts of the country, but these soft yellow shades have us in a sunny daze. (Photos via Frazer Harrison/Jason Merritt/Getty)

3. Ruby Red: All eyes fell on the slew of ladies who royally rocked this crimson color. The shade alone is enough to turn heads, but throw in some bling (like Davis, Williams and Klum all decided to do) and you can count on some permanently fixed gazes. (Photos via Frazer Harrison/Jason Merritt/Getty)

4. Glitter and Glam: You know that sparkly dress you usually reserve for New Year’s Eve? Well, bring that baby back out. From Julliane Moore’s ombre ensemble to Emma Stone’s bejeweled top, sparkles and sequins were all over this year’s red carpet. (Photos via Frazer Harrison/Jason Merritt/Getty)

5. 3D Embellishments: Straying from the herd, these Hollywood beauties added a little something unique to their looks with textured embellishments. From Lupita Nyong’o’s dress, bursting with violet petals to Claire Dane’s extravagantly bejeweled number, this whimsical style was just as brave as those ladies were beautiful. (Photos via Jason Merritt/Getty)

6. Ruffle-rama: These aren’t the ruffles you wore in elementary school. This year’s award ceremony was flooded with sleek gowns that added just a touch of flirtiness with subtle, structured ruffles. (Photos via Frazer Harrison/Jason Merritt/Getty)

7. Structured Silhouette: Heading in a very different direction from the flowy, Grecian looks we often see at award shows, these leading ladies opted for futuristic, structured dresses. Hey, if this is what the future looks like, we’re into it. (Photos via Kevin Winter/Jason Merritt/Getty)

8. Capes Central: We’ve looked into the red carpet crystal ball and we’ve seen a whole lot more capes. This dramatic addition seems to work equally as well on a sleek dress like Jemima Kirke’s or Amal Alamuddin’s as it does on a flashy piece like JLo’s. Side note: Watch out Angelina, JLo’s leg might be the newest limb to take over the internet. (Photos via Frazer Harrison/Jason Merritt/Getty)

9. Plunging Necklines: Necklines were almost non-existent at this year’s show, and maybe that’s not such a bad thing. The ultra (and we mean ultra) low necklines spotted on Kate Hudson and Jessica Chastain were straight-up sexy, while Sienna Miller’s bejewelled dress added a touch of innocent charm. (Photos via Frazer Harrison/Jason Merritt/Getty)

10. Drop Earrings: Forget the basic studs, drop earrings were a definite hit at last night’s event. Whether the hair was swept up or left down, the hanging earring looked just as stunning either way. (Photos via Frazer Harrison/Kevin Winter/Getty)

11. Crystal Bling: The Golden Globes are no place for subtlety when it comes to dresses and apparently, the same goes for accessories. Diamonds, rhinestones and crystals were practically dripping off celebrities throughout the night – and not in small quantities either. These sparkly statement pieces would definitely be a bit much for everyday wear, but this is the red carpet after all.

12. Belts: Whether it was a classic-styled buckle, totally blinged out or had no buckle at all, the waist cinching accessory added a little something extra to these already gorgeous looks, without going too over-the-top.

Did you watch this year’s Golden Globes? What was your favorite look of the night? Share with us in the comments below.

Cortney Clift
Cortney is the senior writer and special projects editor at Brit + Co. She typically covers topics related to women's issues, politics, and lifestyle. When she's not buried behind her computer you'll find her exploring New York City or planning her next big adventure.
Red Carpet
Party
Red Carpet
More From Party