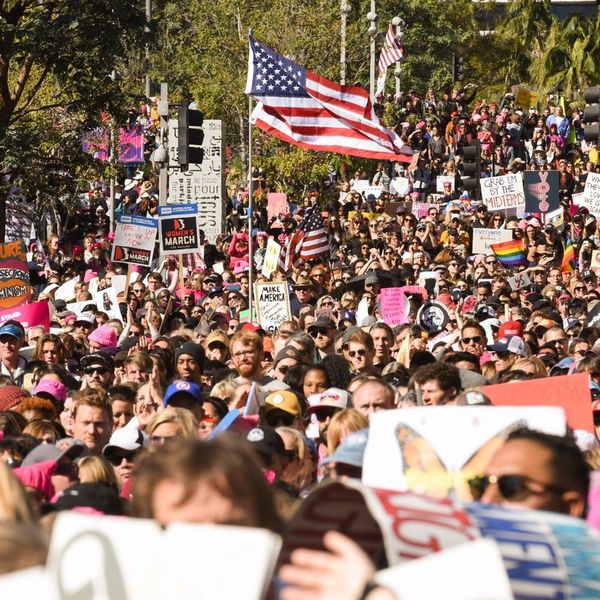 This weekend marks the one-year anniversary of both President Trump’s inauguration and the 2017 Women’s March, the latter of which saw millions of people descend on big cities such as Washington, D.C., New York, Los Angeles, Chicago, and San Francisco to rally in support of women’s rights.

To mark the occasion, hundreds of towns and cities in the US and around the world are hosting anniversary marches. Many of those took place on Saturday, January 20, and once again, huge crowds turned out with signs and chants in support of various issues (and, in many cases, against Trump).

Official numbers are still pending, and there are more events taking place all over the world on Sunday — including the official anniversary rally in Las Vegas — but here’s a look at some of the preliminary crowd estimates for a few of the many, many marches around the country on Saturday.

The Women’s March is about all of us: Angelenos, Americans — standing in solidarity for peace, acceptance, and equality. Thank you, Los Angeles, for coming together and showing the values that unite us. #WMLA2018 #WomensMarch2018

Chicago, Illinois: According to The Chicago Tribune, organizers estimate that approximately 300,000 people turned out for this year’s march. Last year’s attendance was estimated to be 250,000.

“Over 200,000 people took to the street yesterday in New York City to fight for the future of their country,” de Blasio wrote. “It was the one year anniversary of one of the greatest protests in American history, and it was a promise to keep the fight going.”

San Francisco, California: One of the organizers, Sophia Andary, told ABC7 that she estimated there were at least 50,000 people at the SF march this year. Other reports said the city was expecting anywhere from 80,000 to 100,000.

Oakland, California: Police told the local CBS affiliate that the crowd in Oakland was estimated to be 40,000 to 50,000 strong.

Seattle, Washington: Police put the numbers in Seattle in the tens of thousands, according to The Seattle Times.

Philadelphia, Pennsylvania: One reporter tweeted that the “very very unofficial” estimate from organizers was over 50,000 attendees in Philly.

Boston, Massachusetts:The Boston Globe put the city’s turnout at around 10,000 on Saturday.

Richmond, Virginia: The turnout in Richmond was estimated to be more than 1,000.

San Jose, California:Estimates put the crowd in San Jose at around 20,000.

Morristown, New Jersey: One of the organizers, Elizabeth Meyer, told NJ.com that police estimated the crowd to be 15,000 strong.

Sacramento, California: According to The Sacramento Bee, this year’s estimated attendance exceeded 30,000.

Did you march? Tell us @BritandCo.