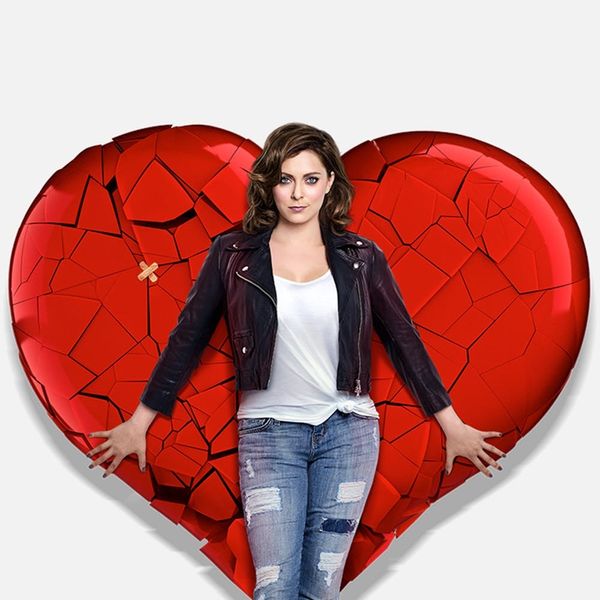 Minimalism is great for some people, but personally we’ve always been into something with a little more POP and pizzazz. And, of course, that translates to our taste in TV shows as well. Over the past year, we’ve fallen in love with Crazy Ex-Girlfriend for its wild musical numbers, hysterical cameos and over-the-top productions. We’ve only got a couple more episodes left of season two, and then we’re going to have to wait MONTHS for the season three premiere (yes, there will be a season three!). So, in the spirit of early preparation, we’ve got five more shows fans of Crazy Ex-Girlfriend should binge immediately.

IF YOU LIKE NEW HITS, WATCH LIFE IN PIECES

If you’re just into the latest and greatest, may we recommend this family comedy from CBS. It follows a large family with three children (and their children) as everybody just tries to figure their own lives out… together. You can watch the show now on CBS. (Photo via CBS)

IF YOU LIKE PICKING UP THE PIECES, WATCH HAPPYISH

Steve Coogan plays a man whose world is turned upside down when his new boss (a 25-year-old tech genius) arrives. The show’s all about just muddling through and maybe just settling for “happyish” — of course all done in the funniest way possible. You can watch it on Showtime. (Photo via Showtime)

This very funny show — starring Don Cheadle and and Kristen Bell — skewers corporate America. You can watch it now via Showtime. (Photo via Showtime)

IF YOU LIKE DYSFUNCTIONAL MUSICALS, WATCH FLIGHT OF THE CONCHORDS

If your favorite part of Crazy Ex-Girlfriend is the funny musical numbers, get more with Flight of the Conchords. The show is about a pair of friends from New Zealand who sing songs about hip hop hippopotamuses and beginners’ French vocab. You can watch the very funny show from HBO. (Photo via HBO)

IF YOU LIKE FUNNY GIRL TUNES, WATCH GARFUNKEL AND OATES

Riki Lindhome and Kate Micucci play friends in a band inspired by rock ‘n’ rolls’ “second bananas.” The very funny show features songs like “Pregnant Women Are Smug” and “The Loophole,” all about, erm, life’s little loopholes. You can watch it on Netflix. (Photo via HBO)

What other shows are you into lately? Let us know @BritandCo!

(Featured photo via The CW)