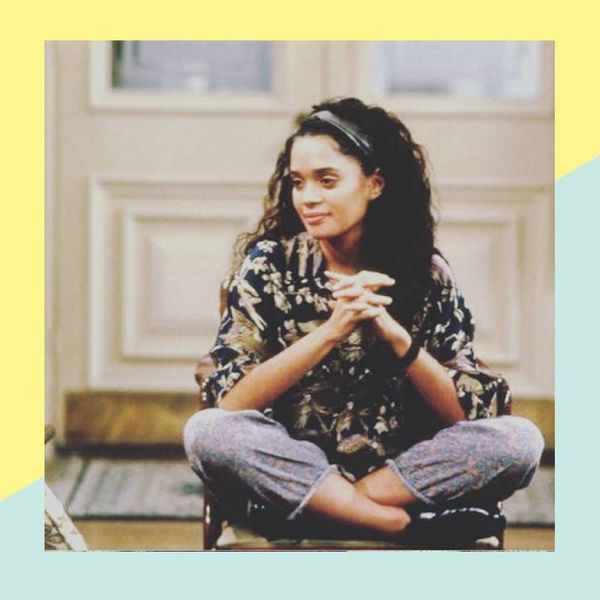 Creating that perfect capsule wardrobe for college is easier than ever this year with a little help from our fave university icons. Class, it’s time to turn our attention to (and take inspiration from) the it-girls who came before us. Before Facebook, Instagram, Snapchat, and the like, there were movie and TV characters who redefined the college-woman aesthetic forever. Ahead, check out six iconic ladies of (pretend) higher education from whom you’ll most definitely want to steal a few tricks. Consider this your college style cheat sheet.

All hail the eclectic style queen of college! Lisa Bonet (middle) as free-spirited, wild-child Denise on The Cosby Show and the first season of A Different World was pretty much the epitome of cool. Whether she was rocking locs or wild curls, camo or floral, Denise just gave off the air that she actually gave no f**ks what anyone thought of her look. Master her sartorial swagger with a slew of mismatched patterns and prints, perfectly worn denim, and a variety of vintage toppers in the mix. Confidence in who you are? We’re so here for that.

At the other end of the fashion spectrum was Bonet’s A Different World castmate, Jasmine Guy, as the incomparable Whitley Gilbert. An entitled Southern belle who started out snobby but eventually evolved into someone who wanted to land more than just an M.R.S. degree, Whitley’s polished look (particularly for a college student) is the stuff of TV legend. Turtlenecks, pearls, tailored blazers and perfectly placed hair bows were her hallmarks, and she wore them like the boss-lady-in-training she was. Whitley rocked labels like Chanel, Ferragamo, and Gucci on the daily, so keep an eye out for a little luxury inspo for your back-to-school shopping list. Get it, girl. (Photo via NBCU/Getty)

Having followed her crush to college across the country from California to New York City, Felicity Porter (Keri Russell) was the wide-eyed ingenue you couldn’t help but love. Even as her style evolved throughout the series from Converse Chucks and slouchy backpacks to endless cashmere sweaters and ’90s era denim. Scarves were an important component of her look, but at the end of the day, she was always easy-going and unfussy with her fashion. Felicity never let her clothes wear her, which is an important style lesson to learn. (Also, #TeamBenForever) (Photo via Touchstone Pictures/ABC via Getty)

Perhaps the most classic college style icon of all time, Ali Macgraw’s Jenny Cavalleri in Love Story is forever remembered not only for her tragic plotline but for her ultra-chic wardrobe that inspired a generation. Gorgeous coats, ribbed turtlenecks and a sleek middle part were her trademarks. And if you’ve ever worn a knit beanie with your locks framing your face on either side, well, you’ve pretty much got Jenny to thank. Now, pass the Kleenex, please. (Photo via Paramount/Getty)

Aside from gifting us the “Bend and Snap,” which would be reason enough to give thanks, Legally Blonde bestowed upon us the unapologetically bold style icon of Elle Woods, played by Reese Witherspoon, of course. From her colored lenses (currently experiencing a revival) to her ability to work satin, sequins, and pink into any outfit (day or night), Elle taught us that you don’t have to look — or be — like everyone else to be successful and that fashion should be, above all else, fun. Let’s hear it for the girl! (Photo via Tracy Bennett/MGM/Getty)

Okay, so technically, she was just post-college, but regardless, Lelaina Pierce (Winona Ryder) was pretty much the epitome of 90’s style. Her shaggy pixie cut, her thrift store dresses, her chunky shoes: They all scream Gen-X angst and “I actually woke up like this.” Her effortless, messy-chic vibe also perfectly sums up the confusion many post-grads feel in the real world — and she makes it look good (just check out her smokin’ red tank and jeans look in the infamous gas station scene). (Photo via Universal/Getty)