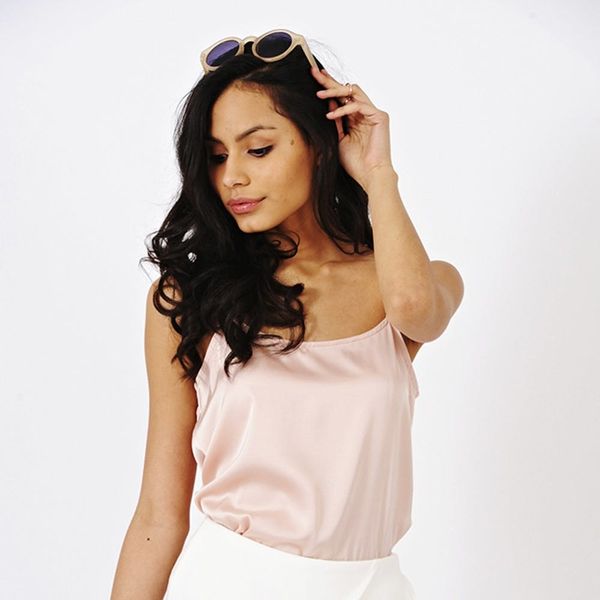 Ready for a throwback? We know we are, and we’re betting after you take a look at these reemerging ’90s trends, you will be too. The ’90s were about mixing pretty girly details with a bit of edge. Whether you’re a super sweet bride-to-be like Drew Barrymore in The Wedding Singer, or more flashy and bold like Christina Applegate in Married with Children, we’ve got 11 new duds to slip into your wardrobe.

1. Thelma and Louise: Geena Davis is our favorite housewife turned rebel in Thelma and Louise. Live out your own rebellious fantasies with this tied chambray top ($78) and some dark shades. Get ready to tap into your wild side. (image via Pathé Entertainment)

2. Edward Scissorhands: We loved Winona Ryder as a blonde having an offbeat romance with Johnny Depp in Edward Scissorhands. Copy her magic, snowy look with this modernized off-the-shoulder dress ($61). (image via 20th Century Fox)

3. The Wedding Singer: Drew Barrymore was just the sweetest as Julia in The Wedding Singer, opposite the goofy, love-struck and always clever Adam Sandler. You can copy her girl-next-door style with this baby pink satin cami ($12). (image via New Line Cinema / Warner Bros.)

4. Gia: Angelina Jolie always makes an impression, especially in her role as Gia in the movie by the same name. Try this shorter version of her keyhole dress ($32) to get in touch with your inner supermodel. (image via HBO)

5. Clueless: Alicia Silverstone wore knee-high or above-the-knee socks ($14) more than you think in Clueless — like, a lot. This modified school-girl look is the perfect example of her mega-trendy high school style. (image via Paramount Pictures)

7. Jawbreaker: Rose McGowan’s character in Jawbreaker was the original mean girl who we love to hate. Copy her retro style by wearing different shades of the same color, starting with this cashmere purple cardigan ($188). (image via TriStar / Sony Pictures)

8. Clueless: Yes, we put it on here twice. We just couldn’t pass. We love Tai before and after her makeover. Get your own laid-back, skater style going with this extra-faded flannel ($57). (image via Paramount Pictures)

9. Empire Records: We definitely would’ve noticed A.J. if we were Corey in Empire Records. We love how she made combat boots go with her girly style. Try mixing up your normal footwear by pairing these combat boots ($278) with your favorite mini. (image via Regency Enterprises)

11. Never Been Kissed: Jessica Alba’s character wasn’t very nice to Josie in Never Been Kissed, but she did know how to match her lipstick to her jacket — a total ’90s move. Get bold and bright by rocking your own bright orange denim ($59) — matching lipstick optional. (image via 20th Century Fox)

Don’t see your ’90s fashion icon? Let us know who we missed in the comments.

Adrienne Leonard
Adrienne’s favorite things are making popsicles, picking flowers and spending time anywhere with a shoreline. When she’s not outdoors with her dogs, Russell and Charlie, you can find her working on her domestic skills at The Free Spirited.
90s
Trends and Inspo
90s retro