Made Us Look: Typography Made from Aerial Images 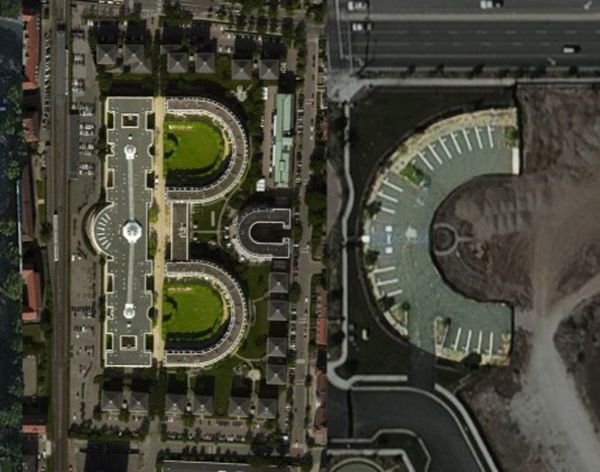 It’s time to celebrate, typeface nerds, because there’s a new font in town. It may not be one that you can necessarily type your term papers in, but it’s definitely one worth talking about. Say hello to Aerial Bold, the world’s first accidental typeface.

MIT alumni Joey Lee and Benedikt Groß started this ambitious typography project by creating algorithms that scan the world’s satellite data for features that resemble letters. But it isn’t designed just for creative fulfillment. Lee and Groß say that the algorithms and technology that they’re perfecting could be used for other projects in the future, essentially allowing mankind to automatically scan satellite imagery for patterns and create a new type of mapping.

While they’ve already found each of the 26 letters of the alphabet, the designers have a bigger picture in mind. Aerial Bold will be a searchable database of everything in the world that looks like letters from an aerial view. So in the end, there could potentially be hundreds of As to choose from, one seen in France, one in Mexico and one found in Dubai. Because of the worldly size of this project, Lee and Groß created a Kickstarter to get some help.

Once completed, the database will be available for purchase, and selected letterforms will be made into a font format that you can, in fact, write your term papers in.

Are you loving the idea behind Aerial Bold as much as we are? Sound off below!

Rachel Sumner
Rachel is a Contributing Editor at Brit + Co and the founding editor of lifestyle blog, SADIERAE + CO. While her background is in fashion and styling, she also loves all things creative, cooking, traveling, binge-watching TV shows and giving piggy back rides to her golden retriever, Louie.
Art
Tech
Art Design Kickstarter Typography
More From Tech