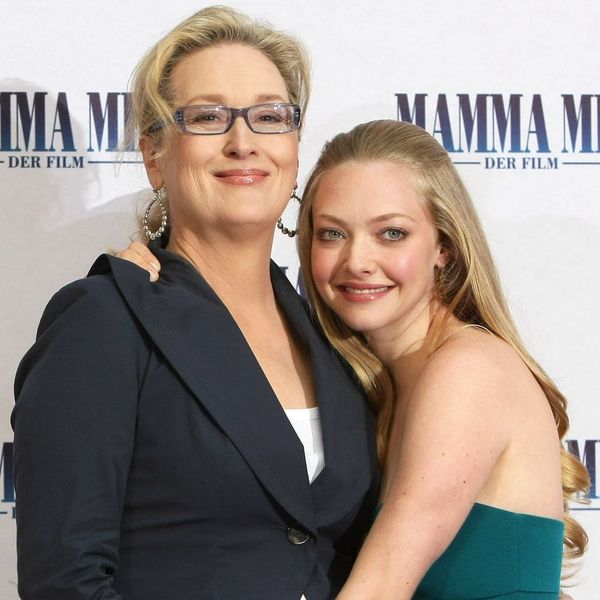 It’s been 10 years since Mamma Mia! hit the big screen, and when the trailer for its long-awaited sequel dropped late last year, the excitement was overshadowed by one major question: Where was Meryl Streep?! Amanda Seyfried, who stars as Streep’s on-screen daughter, recently addressed the questions about the acting icon’s status in the film, but her answer was more confusing than reassuring.

“You do see her. Meryl is very much a part of this movie,” Seyfried told ET. In the trailers, Streep’s character, Donna Sheridan, is shown only in flashbacks and mentioned in the past tense. According to Seyfried, though, the flashbacks might not factor into the final product.

“No, there are absolutely no flashbacks,” she continued. “Because all the ‘flashbacks’ are of Lily [James] playing Donna. So it’s a prequel and a sequel, and so you see Meryl is very much a part of it.”

The sequel, titled Mamma Mia! Here We Go Again, jumps ahead in time from its predecessor. In the trailers, we see Sophie (Amanda Seyfried) revealing to her mother’s best friends, Rosie and Tanya (Julie Walters and Christine Baranski), that she’s pregnant, which causes her to reflect on her own mother’s life.

While Seyfried’s answers might not provide the clarity we’re looking for, she did drop one other small hint about Streep’s involvement. “I’m pretty sure [Streep and Cher, who plays Seyfried’s grandmother in the sequel] were staying at the same place when they were in town to shoot,” she told ET, admitting that she pictured them getting together to watch movies in their sweats. We’ll keep that image with us until Mamma Mia! Here We Go Again opens in theaters on July 20, 2018.

Are you worried about Meryl Streep’s involvement in the Mamma Mia! sequel? Let us know @BritandCo.