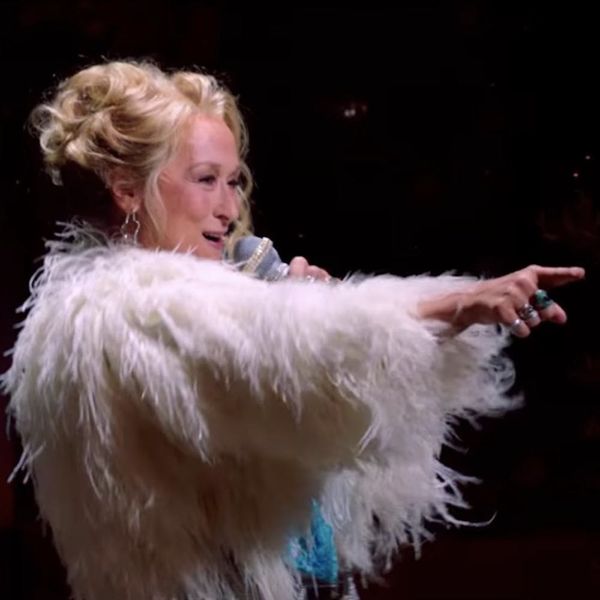 When the first trailer for the Mamma Mia sequel dropped back in December, fans were left with one big question: Where the heck is Meryl Streep’s Donna?! The second glimpse at Mamma Mia! Here We Go Again doesn’t solve that mystery —in fact, we have even more questions now than before — but it does give us another look at her backstory.

Jumping slightly ahead in time from where the last film ended, the sequel finds Sophie (Amanda Seyfried) pregnant and reflecting on her mom’s past — specifically the time when she found out that she was going to be a mother. This takes us back to Donna’s earliest days on the Greek island of Kalokairi, when she first met her trio of adoring suitors, Bill, Sam, and Harry.

The trailer has all of the smiles, songs, and dreamy settings that you’d expect from the long-awaited sequel — can you believe it’s been almost 10 years since the original came out? — but it also leaves you wondering where Donna is in the present day. Since she’s seen only in flashbacks and mentioned in the past-tense, fans have speculated that she passed away sometime between where the last movie left off and where this one picks up.

Though we may not know the truth until the movie hits screens on July 20, 2018, we do know something else about the next chapter of this story: Cher turns up as Donna’s mother and Sophie’s grandmother! Honestly, we can’t think of anyone else we’d rather see in the role. As she says in the clip, “Let’s get the party started!”

Check out the international trailer above.

Do you think Meryl Streep’s character is still alive in Mamma Mia! Here We Go Again? Let us know @BritandCo!