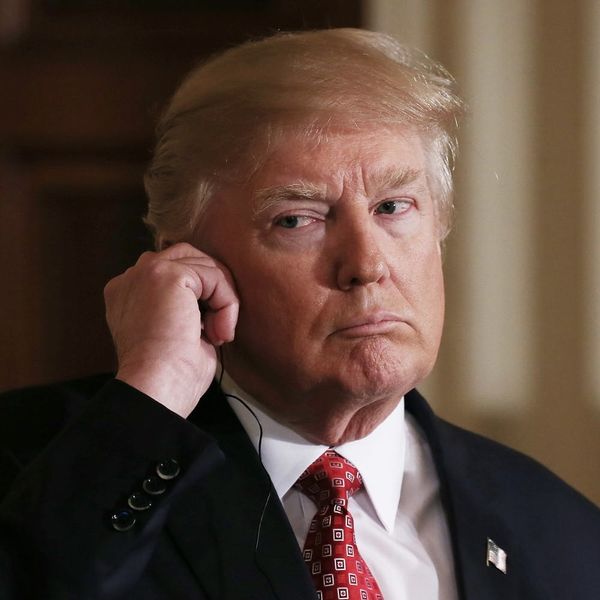 The folks behind American Horror Story are masters of the macabre, bringing us a regular dose of the fantastically freaky. Willing to take on the most terrifying tales, they’re about to dive right into the most controversial and strangest story of our time: the 2016 election.

American Horror Story producer Ryan Murphy confirmed the fact himself while appearing on last night’s Watch What Happens Live With Andy Cohen, saying, “[Season 7] is going to be about the election that we just went through, so I think that will be interesting for a lot of people.” No doubt!

But what about the villain in the story? Will it be a figure from the election, or someone completely fictional? Murphy isn’t giving answers. When asked if President Trump might inspire one of the characters, he gave an intriguing “maybe” in reply.

If season seven of AHS does indeed deal with the election (and a Trump-ish character appears), we can safely bet that the president will be tweeting all about it, especially since plenty of folks are already doing so…

American horror Story season 7 will be based around the recent American Election…………this should be interesting! :O#AHS #Election pic.twitter.com/t86yU132Cn

American Horror Story season 7 will be about the 2016 Election…we all know that's gonna be terrifying pic.twitter.com/MnR0i6AZe5

"season 7 of American Horror Story is the 2016 election" pic.twitter.com/JnhvHTPUVu

american horror story season 7 is about the 2016 election pic.twitter.com/PQ4j11sa2e

Do you think it’s a good idea for American Horror Story to do a season about the election? Tweet us @BritandCo!

Desiree O
Desirée O is a ‘Professional Bohemian’ who loves anything and everything related to the arts, entertainment, and pop culture. She ADORES being a ‘Newsy’ for Brit + Co, covering all of the latest tidbits of awesomeness that you want to read about. When she’s not writing, she’s either making messy art, going on long adventurous walks with her camera, or poking around over at bohemianizm (http://www.bohemianizm.com/). You can find out about Desirée O and her work at http://DesireeO.com/ or follow her on Twitter @DesireeO.
Politics
Pop Culture
Politics
More From Pop Culture