The 10 Strangest Moments of the 2016 Election 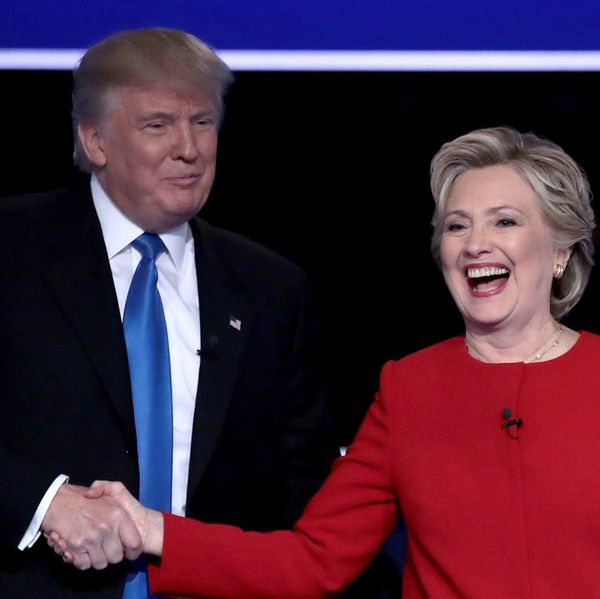 We think we can speak for many when we say that it’s been a LONG election season: In fact, we can hardly remember a time when Donald Trump and Hillary Clinton weren’t duking it out for our country’s top office. Things were simpler then — our Facebook feeds were largely filled with cats instead of Bernie Sanders memes, Donald Trump was best known for Celebrity Apprentice and Janet Jackson’s “Nasty” was just a hit ‘80s song. Whether you’re a Democrat or a Republican, pro-Hillary or pro-Trump, one thing we can all agree on is that this election has been weird, man. With everything about to come to a head on November 8 (and no, you can’t vote by text!), we’re giving you a look back at some of the election’s strangest moments. Hang on to your seats, kids — there are some doozies!

1. Trump’s Bald Eagle “Attack”: Aiming to kick election season off with a bang, Donald Trump agreed to a Time photoshoot with a bald eagle. Unfortunately for Donald, the eagle wasn’t quite so thrilled to be having his photo taken with the Republican candidate, mussing up his infamous hair with its powerful wings and nipping at him as he sat at a desk. (Photo via Associated Press)

2. America’s Love/Hate Affair With Ken Bone: An unexpected star rose like a phoenix from the second Presidential debate, and oddly enough, he wasn’t even a candidate. An undecided voter named Ken Bone asked an innocent enough question regarding energy, and just like that, he became a star. The world took to Ken and his innocuous appearance (especially that grandpa sweater) like bees to a flower, blowing up Twitter with its approval. But just as quickly as he rose, Kenneth fell, after fans discovered some seriously disturbing Reddit comments he had made prior to internet fame. Ken spoke out in his own defense, but his 15 minutes seem to have fizzled anyway. Womp, womp. (Photo via Frazer Harrison/Getty)

3. Hillary Clinton’s Email Scandal: Hillary Clinton’s emails have been the subject of many a heated debate throughout election season, with not only America, but the FBI trying to determine if the Democratic candidate was guilty of compromising the country’s security by sending sensitive emails through an unsecure server. Though she was cleared of all charges back in July, the FBI recently caused an uproar when it announced that it was reviewing new evidence from an unrelated case with regard to Hillary’s investigation. The FBI has since declared that they’ve found no criminal wrongdoing in the new emails. (Photo via Justin Sullivan/Getty)

4. Ben Carson’s Stage Fright: Before there were two, there was a whole stage full of both Democratic and Republican candidates, one of which was Ben Carson. Though Ben had several moments throughout his campaign that could be described as “strange,” the most memorable had to be his failure to follow through with his entrance during a February debate. While it’s unclear if he simply failed to hear his name called or was vexed with a massive case of stage fright, the results were… weird. (Photo via tmptv)

5. Donald’s Alicia Machado Twitter Rant: Donald Trump had MANY Twitter controversies this election season (his latest being aimed at his own party), but the strangest had to be his week-long attack of ’90s beauty queen Alicia Machado after she was brought up in debate. As the former owner of the Miss Universe pageant, Trump had used some not-so-choice words regarding her weight gain following her 1996 pageant win (read: he called her Miss Piggy). When Hillary pointed this out as an example of Donald’s lack of respect for women, Donald went on the attack, tweeting about an alleged sex tape Alicia was featured in. Alicia fought back and, needless to say, she’s now very much pro-Hillary. (Photo via Justin Sullivan/Getty)

6. Donald Trump’s Access Hollywood Video: Ay yi yi: Where do we even start with this one? In a tabloid scandal unlike any Presidential election we’ve ever seen, a video of Donald Trump making some, uh, rather profane remarks to Access Hollywood host Billy Bush was leaked, in which the presidential hopeful could be heard not only bragging about attempting to hook up with the show’s co-host, Nancy O’Dell, but promoting sexual assault by suggesting that it was okay for celebrities to take advantage of women. The fallout was disastrous, with even daughter Ivanka Trump denouncing the disgusting comments, and countless women speaking out to say they’d actually BEEN assaulted by Donald. Hollywood was just as stunned as the rest of us, with Robert DeNiro moved to fighting words, but it remains to be seen whether or not it will cost him the presidency. (Photo via Rob Kim/Getty)

7. Hillary’s Cough: Halfway through the election season, campaigning appeared to have taken its toll on Mrs. Clinton, as she came down with a nasty case of pneumonia. With a dreadful cough that just wouldn’t quit, it wasn’t long before conspiracy theories regarding the state of her health began to swirl, with some going as far as to question whether or not she was fit to hold office in such a state. Things only got worse when she publicly collapsed, forcing her into bedrest. She’s since returned to tiptop shape, though not before undergoing a physical and releasing a doctor’s note to prove to America that she was physically fit to serve. (Photo via FOX 10 Phoenix)

8. “Nasty Woman” Pandemonium: Hillary herself couldn’t even have foreseen the positive press her campaign would receive in the wake of an insult Donald hurled at his opponent toward the end of the second Presidential debate. Calling her a “nasty woman,” he opened the door for women everywhere to turn the term into a positive movement, taking to Twitter to reveal why they themselves identified with Hillary as such. The term became so popular, in fact, that streams of Janet Jackson’s “Nasty” soared by as much as 250 percent on Spotify. Talk about a major backfire! (Photo via David Becker/Getty)

9. The Trump Loom: On the heels of his video scandal, a very perturbed Donald Trump appeared at the second Presidential debate in rare form. Seemingly hovering or looming behind his opponent at every chance he got, his strange body language was regarded as an intimidation tactic by many. Hillary also found his body language odd, appearing on Ellen to say so. (Photo via Pool/Getty)

10. The Jeb Bush Clap: Our favorite strangely hilarious moment of the election thus far has to go to Republican hopeful Jeb Bush. Near the end of his campaign, the former Florida governor made an impassioned speech to a group of less-than-impressed voters in Hanover, New Hampshire. When they failed to be moved, Jeb was reduced to pleading, “Please clap.” Poor guy! (Photo via smurfparty)

Which moment do you think earned top strange honors? Share with us over @BritandCo.

Nicole Briese
Nicole is the weekend editor for Brit + Co who loves bringing you all the latest buzz. When she's not busy typing away into the wee hours, you can usually find her canoodling with her fur babies, rooting around in a bookstore, or rocking out at a concert of some sort (Guns N' Roses forever!). Check out all her latest musings and past work at nicolebjean.com.
Politics
Politics
Politics social media
More From Politics