What the Deck? These Playing Cards Are Gorgeous 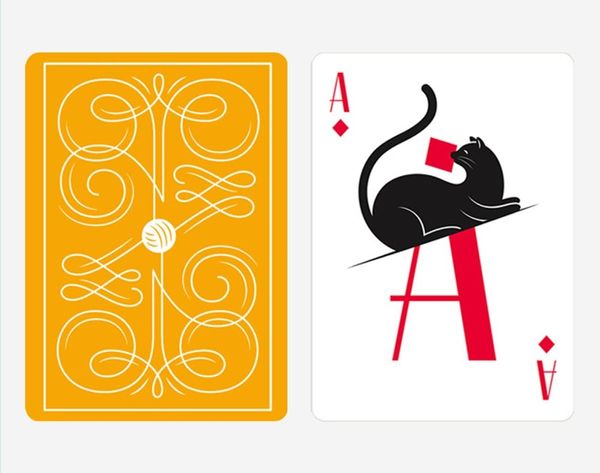 When’s the last time you had a really great deck of playing cards? Not Apples to Apples or Cards Against Humanity, but just a traditional 52-card deck. There’s so much potential for so many games (and magic tricks) right there in the palm of your hand. As far as the cards’ design, we’ve seen some variations, but all-in-all people keep going back to the classic mirrored faces of the suit’s royal families. But the Amigos Card Club is a fan of shaking up tradition with beautifully designed decks for stylish playing.

With the help of creative group Fictive Kin, Amigos is running a Kickstarter campaign to launch three of their most striking decks by three very talented, esteemed designers — Jessica Hische, Frank Chimero and Alonzo Felix. Each of the decks is totally gorgeous and is also a totally new interpretation on the classic.

Cat lovers rejoice, for Jessica Hische has finally given felines the royal title they deserve. Watch as they play with the icon of each suit, while occasionally donning a crown. And, of course, since Hische is a modern master of type (she did the lettering for Moonrise Kingdom), you know that every single glyph is flowy, calligraphic and elegantly unique.

Frank Chimero is the author of the ever-popular design lover’s bookshelf staple, The Shape of Design. His work is an ongoing exploration of design and story, and it shows in his deck, which gives a hand-drawn, simple update to the figures and faces we’re all use to seeing on our cards. If anything, Chimero’s design seems to make the familiar king and queen look more vintage with storybook-like illustrations.

Alonzo Felix ditched the royal family altogether for a family of spacecrafts and all things celestial. Felix has a knack for bold vector graphics, so it’s no surprise that his cards keep things geometric in a way that somehow reminds us of 8-bit Space Invaders. But of course, much more detailed.

These cards would make great holiday stocking stuffers, or additions to your coffee table spread for entertainment at holiday gatherings. A $14 pledge will get you one deck, a $25 one gets you two and $36 gets you all three. Find all the details at the Kickstarter campaign which ends November 9 (TOMORROW!)!

What’s your favorite card design? Shuffle on down to the comments and let us know!

Katelan Cunningham
Katelan is a tech junkie obsessing over all things startup and design. She has entirely way too many apps on her phone and is no stranger to binge-watching. She accidentally fell in love in Los Angeles and that’s where she currently lives, writes, tweets and grams.
Art
Home News
Art Cards Design Designers Games Gifts hand lettering Hanukkah Kickstarter
More From Home News