25 Reasons Why You Need to Try Aquafaba, the Latest Pinterest Food Trend 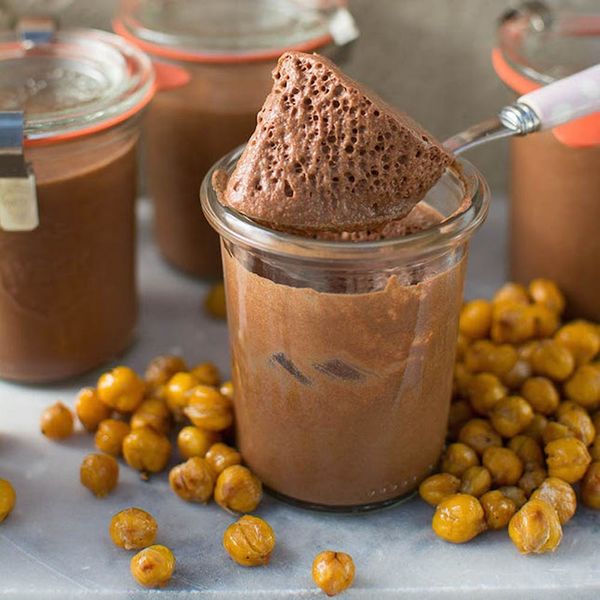 If you haven’t acquainted yourself with aquafaba yet, get ready for the quick and dirty low-down: Aquafaba is one of the healthy food trends of 2016 and is probably blowing up all over your Pinterest as we speak. It’s most commonly taken from chickpeas, but it’s essentially the liquid that comes in a can of beans. It can be used as a thickener, oil alternative or egg replacement. Mostly it’s used in vegan dishes, but you *definitely* don’t have to be vegan to reap its benefits. Plus, it’s great for using in bean dessert recipes without actually having to use beans. The best part is that its flavor is completely undetectable, and you’re using an ingredient that otherwise would have been wasted. Crack open that can and reserve the liquid gold inside, because these 25 Pinterest-worthy recipes will give you plenty of ways to use it.

1. Aquafaba French Toast: This breakfast and brunch staple is a must for any household. It’s made vegan by subbing aquafaba for the eggs, and the result is exactly like the original. (via Vegan Mother Hubbard)

2. Vegan Aquafaba Butter: If you’re a classic butter eater, you may be very skeptical about this vegan version, but trust us — if you try it, you won’t be disappointed. Even if you do consume animal products, you’ll love this healthier take on butter. (via Plante Pusherne)

3. Vegan Gluten-Free Churros With Cinnamon Aquafaba Frosting: Carnival food that’s vegan and you can easily make at home is an automatic winner in our book. Heads up — you might just want to slather that frosting on everything. (via So Delicious Dairy Free)

4. Earl Grey and Lemon Vegan French Macarons: You may be thinking that macarons are hard enough to make without introducing a whole new ingredient to the mix. Wrong. The preparation is actually exactly the same, save for swapping the egg whites for aquafaba. They may actually be more fool-proof than you think. (via Morsels and Moonshine)

5. Fudgy Vegan Brownies: What makes these brownies so decadent and fudgy? A balanced mix of fruity olive oil, dark chocolate and aquafaba take them from ordinary to extraordinary. Your bake-sale buyers wouldn’t even know they’re vegan. (via Lazy Cat Kitchen)

6. Galaxy Macarons: Gone are the days when vegans didn’t have the same food options as the rest of the population. These macarons are so close to the original, they even have the “feet” that macarons are known for. Fill these with vegan buttercream or keep it simple with a smear of your favorite jam. (via Avocados and Ales)

7. Gluten-Free Chocolate Cake With Cheesecake Frosting and Cookie Crumble: Birthdays and holidays will never be the same now that you’ve discovered this masterpiece of a cake. You can also make 12 cupcakes with this recipe; that way you can switch it up, since you’ll be making it over and over again. (via The Plant Philosophy)

8. Fluffy Vegan Oatmeal Pancakes With Aquafaba: They key to fluffy vegan pancakes isn’t the way you prepare them — it’s the chickpea juice. Whipping the aquafaba before mixing it into the batter means you get a light and airy pancake that will impress everyone. (via Serious Eats)

9. Vegan Chocolate Chip and Peanut Butter Mousse: Anyone who’s familiar with the airy texture of mousse can take one look at that photo and see that it’s spot on. Whipped aquafaba is the perfect addition to any recipe that calls for whipped egg whites. The proof is in the pudding — err, mousse. (via Tinned Tomatoes)

10. One Hour Cinnamon Rolls: Did you know that aquafaba can easily be frozen? The next time you make hummus, pour out the chickpea liquid into ice trays. Then, when you want to make quick vegan cinnamon rolls, you can pop out a couple cubes and you’re ready to rock. (via Vegan Richa)

11. Aquafabulous Chocolate Mousse: Three ingredients are all that stand between you and this light and airy dessert. Plus, you can’t turn down a treat with a name as great as “aquafabulous.” (via Following Breadcrumbs)

12. Chocolate Chip Cookies: This is a great base recipe for a vegan cookie that you can easily adapt according to what you have in your pantry. Chocolate chips are *obviously* a must, but you can add raisins and nuts, or even peanut butter if you wish. (via Begin With Nutrition)

13. Cranberry Orange Clafoutis: This French custard-based dessert is an elegant addition to any table. In order to mimic the classic texture that eggs traditionally provide this dish, you need a protein-rich substitute like aquafaba. The similarity is undeniable and the flavor is to die for. (via Fettle Vegan)

14. Melt in Your Mouth Vegan Cornbread: This is not the dry and crumbly cornbread you may have had in the past. Between the vegan butter, chickpea juice and almond milk, this bread is super moist and almost cake-like. You’ll want to top every bowl of chili with it from here on out. (via Cheftographer)

15. Hazelnut and Almond Dacquoise With Espresso Buttercream and Chocolate Ganache: If you need a vegan dessert that will please the eyes and palates of the masses, look no further. This fancy French sweet is going to impress even the most critical of foodies. (via Avocados and Ales)

16. Vegan White Chocolate Mousse: This is an absolute must-try recipe. All you need is the liquid from one can of chickpeas and white chocolate to create this creamy and delicious dessert that’s perfect for date night. (via Green Evi)

17. Homemade Eggless Mayonnaise: Making vegan mayo that rivals the flavor of the eggy version wasn’t an easy task until someone decided to make it using aquafaba. The similarities are uncanny, especially once you refrigerate it for a while to allow it to thicken. Your vegan sandwich won’t be the same after you make this mayo. (via Ruchi’s Kitchen)

18. Vegan Hawaiian Bread: Because Hawaiian bread calls for a very eggy dough, it’s hard to find a vegan alternative. Thankfully, aquafaba gives you the option of making a pretty good duplicate at home, so you can enjoy that sweet and fluffy bread once again. (via Seitan Beats Your Meat)

19. Vegan Lemon Meringue Cupcakes: Nothing will impress your non-vegan friends like a cupcake with meringue frosting. Little do they know, this spot-on meringue is made with little more than chickpea water, powdered sugar, cream of tartar and vanilla. (via Wallflower Kitchen)

20. Vegan Marshmallow Fluff Stuffed PB Cookies: Vegan marshmallow cream is a staple recipe you can take in endless directions. Start with the filling for these peanut butter cookies, and then perhaps a vegan s’mores bar after that. (via Ecorazzi)

21. Vegan and Gluten-Free Strawberries and Cream Scones: These scones are bursting with sweet and juicy strawberries and filled with creamy coconut flavor. A batch of these may last you through the end of the week, but you may want to double it… just in case. (via Cheftographer)

22. Chocolate Sheet Cake: There are a few recipes everyone needs in their collection, regardless of their dietary preference — biscuits, mashed potatoes and chocolate sheet cake, just to name a few. Even if you’re not vegan, a recipe like this one is great to have on hand when celebrating a dairy-free friend’s birthday. (via Begin With Nutrition)

23. Whole Grain Aquafaba Waffles: Waffles need a good bit of volume to keep their light and fluffy texture intact. Whipping chickpea water into the batter does just that without imparting any extra flavor on the waffles, and you can add whatever mix-ins you want. Vegan chocolate chips, perhaps? (via The Pancake Princess)

24. Vegan Meringues: This is NOT a drill. Non-vegans may actually prefer these babies to the egg meringues they’re used to. They’re less dry than the traditional treat, which means they’re less messy and more fun to eat. (via Cooking Is Messy)

25. Vegan and Gluten-Free Banana Bread: No matter what diet you adhere to, this banana bread will rock your world. We’re not saying you should let your bananas go brown, but you may want to accidentally set a few aside for this recipe. (via Free Range Cookies)

From Your Site Articles
Paige Johnson
Paige is a blogger, food writer and culinary master from Louisville, Ky. She's a newlywed who's obsessed with dogs and renovating her 117 year old home. When she's not working on her blog — My Modern Cookery — you can find her binge watching F.R.I.E.N.D.S with a triple shot latte in-hand.
Healthy Recipes
Healthy Eating
Healthy Recipes Vegan Recipes
The Conversation
More From Healthy Eating