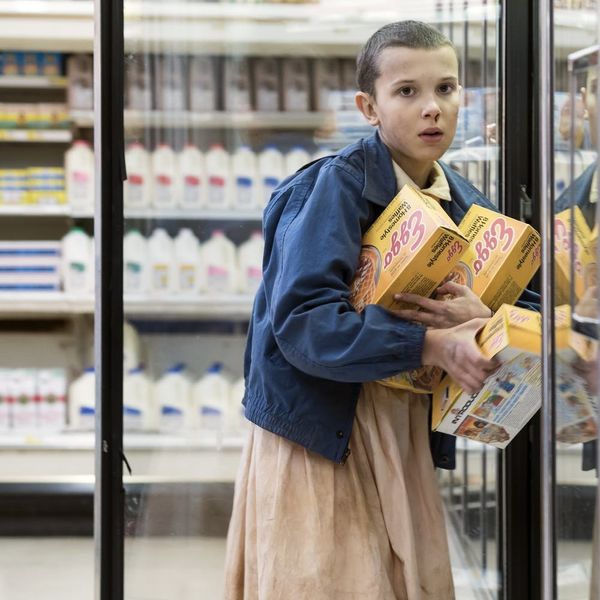 Every TV season brings a few unique character names — some that make interesting baby names possibilities, some that are just weird curiosities. Lately, we’ve had the Game of Thronescrew, and in the futuristic The Handmaid’s Tale, extreme character names Offred, Ofglen, Ofsamuel, and Oferic stepped from the pages of Margaret Atwood’s novel onto the small screen.

With 450+ original series in production in 2017, (and, it seems, almost as many network, cable, and streaming platforms), each show with a full cast of new characters, it’s almost impossible to keep up. But here are some of the quirkiest baby names we found.

1. Amara: Amara De Escalones on Get Shorty is the casino-owning boss and also an immortal character on The Vampire Diaries. Stylish Amara is a multi-cultural name now ranked at #300 nationally and 11 on Nameberry — so it’s one of the most usable names on this list.

3. Boo: In the British comedy Fleabag, Boo is the protagonist’s (yes, called Fleabag) dead but present best friend. A male character in To Kill a Mockingbird, Boo is also the adorable little girl in Monsters, Inc.

4. Colandrea: Colandrea Conners, AKA Coco, is one of a group of African-American students in Dear White People. It’s an interesting extension of Andrea.

5. Creek: Creek Lovell is the name of a waitress on Midnight, Texas. Now, this is one water name we’ve never considered.

6. Crimson: Crimson Fox is a superhero on the show Powerless, a comic book import. More distinctive than Scarlett, Crimson is occasionally used in Alabama because of the Alabama Crimson Tide connection.

7. Duke: In Better Things, all the female characters have boyish names: Sam, Max, Frankie, and Duke (the cast list also includes a Trieste and a Sorrow). Duke is one of the rising noble names for boys — now at #557 — used by Diane Keaton, Justine Bateman, and Giuliana Rancic for their sons.

8. Eleven: Eleven is a pre-teen with psychokinetic powers who plays a big part in Stranger Things. She was born with the name Jane, and is usually known as El. This could usher in a trend for number names, which we haven’t heard since Six on Blossom, Seven on Married With Children, and Erykah Badu’s real-life son Seven.

12. Lucca: In The Good Wife spinoff The Good Fight, Lucca Quinn is a smart bond lawyer. Lucca is a place-name variant of Luca, an Italian boys’ name.

13. Madonna: Madonna Reed is a fierce character on Midnight, Texas. Madonna became virtually a one-person name in the 1980s.

14. Monte: Monte Porter is the principal of a charter school on The Fosters and a newly gender-bended name.

16. Mellandra: Mellandra Morris is the sister-in-law of the female star ofCatastrophe and a distant name cousin of Melanie, Melissa, and Sandra.

17. Soledad: Soledad Temple is a character played by Sonia Braga on Luke Cage. A strong and classic Spanish name, its known here via broadcaster Soledad O’Brien.

18. Tahani:In the fantasy-comedy The Good Place, Tahini Al-Jami is a deceased, wealthy philanthropist now in the heaven-like Good Place.

19. Tulip: Tulip O’Hare, played by rising star Ruth Negga, is a skilled hitman on the AMC series Preacher, based on a comic book series. Tulip could be a flower name waiting to blossom; Rebecca Romijn and Jerry O’Connell used it as a middle.

20. Winter: Winter is a young biracial woman on Taboo. This freshest sounding season name has now risen to #506, chosen by actress Gretchen Mol.

21. Xylda: Xylda is a ghostly grandmother character on Midnight, Texas.

22. Zilpha: Period dramaTaboofeatures several colorful character names, including Zilpha Geary, played by Oona Chaplin, an actress with a historic and colorful name herself. Zilpha is a vintage name yet to be reclaimed.

1. Anish: In Room 104, an HBO anthology series from the Duplass brothers set in a motel room, an Indian character called Anish is featured in one of the episodes. This is just one of several attractive Indian names that are becoming more familiar to American ears.

2. Brace: Brace, on Taboo, is the hero’s manservant and keeper of the family secrets. Brace is a word name that has gotten some use recently, a congenial cousin to Jace, Chace, and Case.

3. Chidi: Chidi Anagoyne is another resident of The Good Place, a deceased ethics professor born in Nigeria. Chidi is a very common Nigerian name of the Igbo tribe, actually a shortened version of longer names starting with Chidi.

4. Cleaver: Cleaver Green is a brilliant, rakish barrister main character in Rake, a new Australian comedy-drama on Acorn. Add this to your list of unusual occupational names, also reminiscent of Leave It to Beaver Cleaver, who was named after a real Australian politician, Cleaver Bunton. Another lawyer on the show is named Lincoln Lincoln.

5. Cotton: In the drama series Star, lead Queen Latifah is named Carlotta, but the standout character name is Cotton, Carlotta’s son-turned-daughter. The name dates back to Puritan times, associated with Cotton Mather.

6. Deran: Deran Cody is the son of Ellen Barkin (character name Smurf!) on Animal Kingdom. Deran is a modern variation of Darren.

7. Earnest: Donald Glover’s starring role name on Atlanta has the alternate spelling as seen in The Importance of Being Earnest. On the show, he’s usually referred to as Earn.

8. Fergal: In Catastrophe, Fergal is the Irish younger brother of the series Irish co-star and co-creator. Fergal is a common, historic Irish appellation, an alternative to Fergus, also spelled Feargal.

9. Florian: This character is a butler on the wrestling show GLOW. Saint’s name Florian is now #18 in Austria and popular throughout Europe, though it hasn’t been heard much in the US since 1940.

10. Goliath: Goliath Jackson is a veteran wrestler on GLOW. Goliath is very possibly his nom de wrestling — unless his mother had some weird premonition. This biblical Philistine giant name has never been considered baby name material.

11. Jelco: Killjoys is a Canadian space adventure drama series with some very interesting names, including Jelco, Pree, Pippin, Alvis, Hills, and Gander, plus women named Dutch, Pawter, Zeph, Bellus, and Banyon, and a male called Fancy. Jelco does have some offbeat potential.

12. Jupiter: Jupiter Blackmon is a recurring cast member on Survivor’s Remorse, a basketball comedy on Starz produced by LeBron James. The name of the supreme Roman deity is primed for discovery, as the partner of hit partner Juno, the rise of sound-alike Juniper, and the popular kids’ book series Jupiter Jones.

13. Ptonomy: Ptonomy Wallace, in Legion, is a mutant with the ability to manipulate memory. The name feels like a cross between Ptolemy and autonomy.

15. Sylvere: Sylvere is the name of the filmmaker husband played by Griffin Dunne in I Love Dick. Unknown here, Sylvere ranked in France until 1969, rising as high as 224 in 1937.

16. Teo: In Queen of the South, Mark Consuelos plays Teo Aljarafe, a smart, high-powered lawyer hired to help the female drug lord. Now here’s one with real potential, keyed to the popularity of Theo, of which it’s the Spanish equivalent (short of Teodoro and Mateo/Matteo). It packs a lot of punch in its three letters.

17. Turin: This Killjoys character name has a nice geographical tie to the northern Italian city AKA Turino.

18. Vico: Vico is a recurring bad boy character on The Fosters. It’s an unusual smoosh of Nico and Vito.

19. Yago: In the latest version of Elmore Leonard’s Get Shorty, Yago is the crime lord’s right-hand-man. Any relation to Iago?

20. Ziggy: Ziggy Chapman is the cute eight-year-old son of Shailene Woodley’s character on Big Little Lies. It also boasts a nostalgic David Bowie trigger, as well as a tie to Bob Marley’s son Ziggy, who was originally David, but was given the nickname by his father after a soccer move by that name.

(Photos via Netflix and HBO)