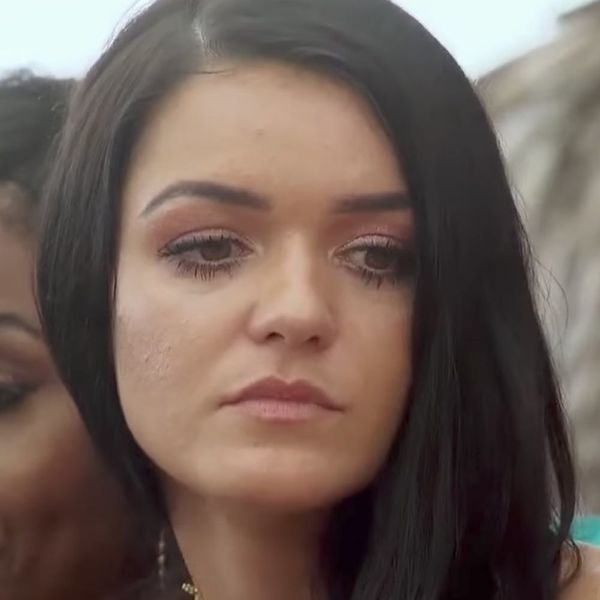 Last night’s Bachelor in Paradise premiere ended on a grim note, with production shut down after allegations of sexual assault. Of course, it was necessary for ABC to run four hours of the show this week in order to give us the full story, right? RIGHT? In the trashiest of reality bait-and-switches, we take a break from the Corinne and DeMario incident to watch Carly and Evan from season three get married for, like, an hour. Because don’t forget, y’all. This franchise is about finding true love, not sexual misconduct. Yep, the first hour is devoted to true love propaganda.

After all, Paradise must work because Carly and Evan came together from season three. We get a recap of their respective experiences on the franchise before we witness how they fell in love. Nothing quite sells true love like Carly saying, “Evan faking his death was, like, the most ridiculous thing, but what’s so weird about it is it actually kind of worked.” Here, we recognize that Bachelor in Paradise is actually purgatory: a place where people who think they can’t possibly find love if it isn’t on a reality television program go to accept their fate over and over again until they’re contractually obligated to have Chris Harrison marry them on film. Congratulations to Carly and Evan. You really, really must be in love now that Chris has bonded you in holy matrimony.

Now that we’ve been assured that only good can come of being in Bachelor Nation, we return to Paradise, where the cast members, sans Corinne and DeMario, have been flown back to Puerto Vallarta. Yes, it’s time to get back to “the business of finding love,” but first Chris Harrison has to have a very serious conversation with the cast. They are prompted to say that the producers have no undue influence on them. Harrison then takes them through a very after-school-special discussion about racism and consent that feels like a bandaid on an amputation. The very serious conversation ends with Harrison asking each of the contestants if they want to be here. They all say yes. Kumbaya, y’all.

So, now that the drama is totally behind us and we never have to think about the ugliness of the world again, let’s find true love! A rose ceremony is on the horizon and the stakes have literally never been higher and there has literally never been more emotion involved. Since the production shutdown, Taylor and Derek, Kristina and Dean, and Jasmine and Matt have kept up with what initially sparked in the first few days of filming. With eight guys and five ladies left, the rest of the men will have to fight, cheat, steal, and kill to get a rose.

Alex (JoJo’s season) wants to get with single mom Amanda (Ben’s season), but she’s not having it. Amanda wanted to give him her rose out of friendship but his continued pestering is starting to wear everyone down. When Amanda makes it clear that there’s nothing going on with them, Alex determines that him being a nice guy by annoying Amanda all the time was ineffective so now he has to be a jerk. Wow, man. Do we need to get Chris Harrison out here to have another very serious conversation with you? Please, no more Chris.

Derek receives a total waste of a date card, which he of course uses on Taylor. She’s hot for him. He’s hot for her. They end up spending the night together and I look forward to their televised marriage next year and I’m over them for now. This contributes to Lacey’s anxiety at having had to leave for her grandfather’s funeral and not being able to make a meaningful connection with any of the men who are still there. So she cries. Like, a lot. Lacey, it’s okay. You will absolutely find your one true love on season six of Bachelor in Space. I know it!

Not all of the couples are feeling as strong as Taylor and Derek. Jasmine feels Matt more than he feels her and the same appears to be happening with Kristina and Dean, despite Dean coming to visit her in Kentucky. Dean tells Kristina that he doesn’t feel good but won’t explain his feelings. Jasmine, Kristina, and Lacey are all left in tears at the end of the night, wishing that more men would show up. A very manly pair of legs walks into Paradise as four hours of uncomfortable television mercifully come to a close. Oh, boy. We’re in it now.

Are you shipping anyone in Paradise? Let us know @BritandCo.