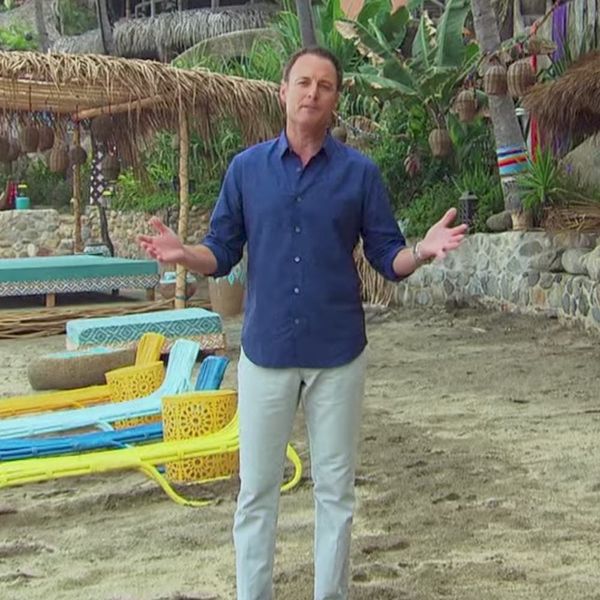 Ugh, we know. Just one week earlier, you clumsily guided us through us through The Bachelorette finale that convinced us love was dead. You had previously proved that you had no clue how to address racism, but no worries here, Chris. This is the much looser and sillier Bachelor in Paradise, so you’re off the hook on addressing serious situations, right?

Of course not. This is, as has been well documented, the season of Bachelor in Paradise that was suspended due to allegations of sexual misconduct between contestants Corinne Olympios and DeMario Jackson. Ultimately, ABC was satisfied that an internal investigation proved that no sexual assault had occurred, and production resumed. What follows on the premiere is how a show so proud of its cheeseballness deals with something of a very serious nature.

Let’s be real. No ABC reality show can address consent in a way that will make anyone feel good at the end of the day. So the approach here of having Chris Harrison narrate everything in true horrible Chris Harrison fashion, constantly talking about how “controversial” and “dramatic” and “surprising” this season will be, feels gross, but not unexpected. In any event, the premiere covers the events leading up to the incident in question. After all, Harrison says, we need to see all of the contrived first date scenarios of twenty-two people (COME ON, can there be a season of one of these shows where there are only, like, 10 of these bozos?) drinking and falling quickly in love with each other.

The first two hours of the four-hour, two-night premiere (good god) mostly feature the introduction of all of the contestants you’ve forgotten from the past five seasons of The Bachelor and The Bachelorette. Paradise has rules and some sort of structure: Many men must date many women, sometimes formally, sometimes drunkenly, and at the time of any of the rose ceremonies, those handing out the roses (in this case, the women) must be madly in love, or I guess marginally interested in someone of the opposite sex in order for them to continue on the show. Here are some of the steaming hot connections we saw in part one of the premiere:

Raven (runner up, Nick’s season) is first to arrive and the clear hero of the show. Ben (Kaitlyn’s season) and Robby (JoJo’s season) go in for the kill with Raven immediately and they’re both pretty terrible. Ben won’t stop talking about how much he loves his dog and how he’s making a huge sacrifice by leaving his dog behind to be here and dude seriously talks about his dog every time he’s on a date or being interviewed. Robby, Ken doll by virtue of having abs that look like they resulted from a particularly violent sneeze, makes a huge deal about his hair, a sort of aborted pompadour that he’s constantly fussing with. Raven, you’re a total sweetheart and you can do way better.

Kristina (Nick’s season) and everyone’s favorite baby bro, Dean (Rachel’s season) hit it off pretty quickly, with Kristina giving Dean the first date card. They bond over their rough family situations and feed off of each other’s sweetness. Kristina had better play the field, though, because almost every other woman in Paradise has their eyes on the boy with the big white teeth.

Nick (JoJo’s season) is determined to get with Jasmine (Nick’s season), but is too drunk the first night for her to have any interest. In comes Matt (the freaking penguin from Rachel’s season) to have sexy sober time with Jasmine, while Nick stumbles around the sand. Matt gives Jasmine a date card and they have a boring date at a drag show. Something tells me Jasmine will have plenty of other options.

Lacey (Nick’s season) and Iggy (Rachel’s season) hit it off quickly, but Lacey’s grandfather dies on the second day and she takes leave to go to the funeral. Lacey is very broken up about the whole thing and cries, like, a lot over not having a boyfriend to take to her grandfather’s funeral. I feel for you, Lace, but Iggy’s the worst. There are way better funeral dates in the ridiculous amount of other men left in Paradise.

Taylor (Nick’s season) is still bummed about her Bachelor experience, particularly her feud with Corinne, but in comes Derek (JoJo’s season) to sweep her off her feet. Taylor, having come in skeptical of finding love in Paradise, is overwhelmed with how easily she’s connecting to Derek. Will their hot meet-up stand the test of time?

Or, frankly, will any of these connections survive the sudden shutdown of the show? Corinne and DeMario’s interactions are shown as being pleasant and not particularly sloppy, and if you’ve had no previous indication, the producers taking them aside and shutting down production at the end of the show will come as a complete shock. Part one ends with a quiet and uncertain Paradise, free of the silly joy and true freaking love one expects on this show. Part two airs tonight and we’ll see just how much Chris Harrison can really screw this one up.