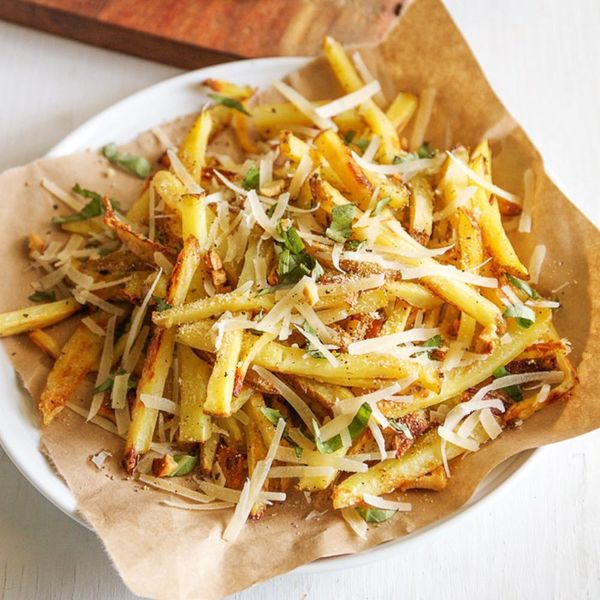 Baseball season is in full swing, folks. And you know what that means? Nine innings of awesome plays and, of course, delish stadiums eats that we dream about all off-season long. Since you can’t make it to every game this season, we’ve gathered up these 12 tempting creations that will transport you to the ballpark with just one bite. You’ll find an assortment of classics such as hot dogs, caramel corn and nachos, along with some newer faves here. No doubt, you’ll want the game to last longer than nine innings to give you even more time for munching. The journey to the World Series has never been so delicious… go Giants! ;)

1. Hot Pretzels With Sweet Mustard and Cheese Sauce: Fresh soft pretzels served with a duo of homemade sauces will surely win you a few fans. (via Just Baked)

2. The Chicago Hot Dog: If you like your dogs loaded with tons of flavor and texture, these “dragged through the garden” links are right up your alley. Peppers, pickles, tomatoes and more mingle together to create this classic Chicago-style creation. (via Lighter and Local)

3. Garlic Parmesan Fries: Baked, not fried, these garlicky fries are a whole lot healthier — but no less delicious — than any you can buy at the ballpark. (via Horses and Heels)

4. Beer-Cooked Bratwurst: We know exactly what we’d sip on to wash down these beer-infused onions and brats. (via The Sugar Hit)

5. Caramel Nut Popcorn: This made-from-scratch popcorn is so good there’s no need to hide any prizes in the bottom of the bowl. (via The Little Epicurean)

6. Mini Corn Dogs: These two-bite corn dogs are not only adorable, but they also deliver just a touch more fluffy-crisp cornmeal batter per bite than their full-sized brethren. (via Jo Cooks)

7. In-N-Out Double Double Copycat (Vegan): Burgers piled high with tons of tempting toppings are a mainstay of the ballpark. You can’t go wrong whether you make these bad boys as-written, or swap in your fave non-vegan patties, cheese and condiments if that’s more your style. (via Fettle Vegan)

9. Carne Asada Fries: Plow through an order of these loaded fries and you’ll feel like you’re cheering on your home team in a So-Cal stadium. (via Sam the Cooking Guy)

10. Boiled Peanuts: Peanuts, salt and water are all it takes to cook up a batch of fresh, warm peanuts to shell over a few innings. (via My Style Recipe)

11. Onion Strings: Seasoned through and through with hot sauce and spices, these skinny onion rings don’t even need a dip in the creamy Sriracha sauce served alongside. (via Melissa’s Southern Style Kitchen)

12. Nacho Bar: Let your guests choose their own culinary adventure with this incredible DIY nacho bar. With queso, guac, salsa, meat and more to choose from, there’s a little something for everyone. (via What’s Gaby Cooking)

What are your go-to eats while cheering on your fave team? Does your team’s stadium serve up any specialties? Let’s discuss home-run-earning eats below!

Heather Sage
Heather Sage is a gluten-free recipe developer and freelance writer living in Orlando by way of the Silicon Valley. When she isn’t playing around with alternative flours in the kitchen, she can be found tackling DIY projects around the house or exploring her neighborhood. Check out her gluten-free recipe blog, A Sage Amalgam.
Comfort Food Recipes
Recipes
Comfort Food Recipes recipe roundup
The Conversation
More From Recipes