This Is the Fluffiest Egg Omelette Recipe Ever Made 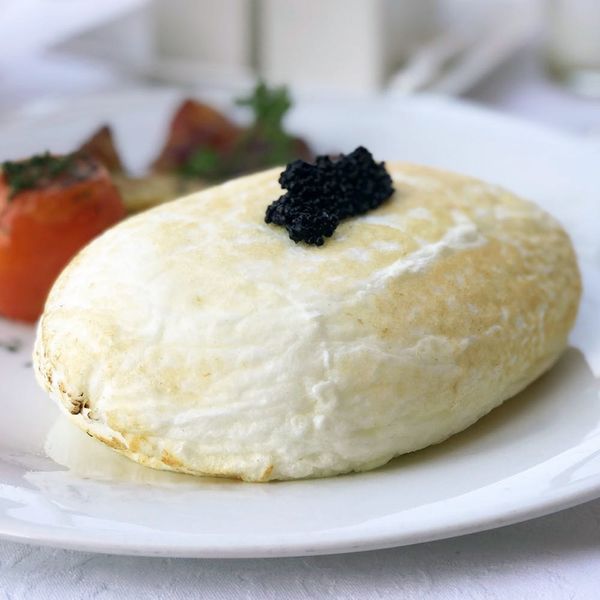 Your brunch game just got a whole lot better with the introduction of the fluffiest egg omelette the world has ever seen. If you happen to be familiar with cloud eggs, then you might have an idea of how these are made, but let me tell you that cloud eggs ain’t got nothing on these bad boys. Not only are they an incredibly clever way to use up leftover egg whites, but once your friends see your mad egg-cooking skills, you’re going to be stuck hosting brunch every weekend for sure!

I stumbled across this ridiculously amazing creation while living out my princess dreams and staying at an actual palace in India. I was checking out the Taj Umaid Bhawan Palace, which is also a hotel and was recently voted the number one hotel in India, and after trying this dish I can easily see why. When perusing their breakfast offerings I couldn’t help but stop at the “truffle and caviar omelette,” because who wouldn’t when seeing that delicious combination, amiright? But that simple description did not prepare me for what showed up on my plate.

This was by far the fluffiest, most amazing omelette I’d ever seen, and I knew that I had to learn how it was made. Thankfully the staff was so accommodating that they took me back into the kitchen and showed me how the magic happened.

It starts by whipping up egg whites into a stiff peak and setting a cast iron skillet lightly oiled with truffle oil over a burner until it’s warm. Then they scoop the egg whites into the pan, smooth out the top, and then “stuff” it with truffles. However, the chef told me that you can stuff it with whatever you like, such as veggies, cheese, and/or meat.

Once it’s filled, they set it under a broiler just to set the top. You could also do this in an oven; just make sure to only lightly toast the egg whites and not let them brown too much.

At this point, the outside is cooked enough so that you can carefully fold it in half, creating the half-moon shape. Once you’ve folded it in half, keep flipping it until the outside of the omelette is lightly browned.

They then top their omelette with more truffle oil and a dollop of caviar, but you could top it with anything you like.

And voilà — the most amazing egg omelette ever!

If you do try this out, be sure to post your photos to Instagram with the hashtag #FluffiestOmeletteEver.

From Your Site Articles
Nicole Iizuka
Nicole Iizuka is a writer, producer, and director living in Los Angeles. While she has worked several jobs all over Hollywood, her love of food and travel keeps her constantly cooking up new, strange, exotic, and colorful recipes. You can follow her adventures on Instagram @nicolemiizuka or on www.itsborderlinegenius.com.
Breakfast Recipes
DIY Recipes
Breakfast Recipes Brunch Recipes Easter Brunch Recipes
The Conversation
Reviews:
More From DIY Recipes