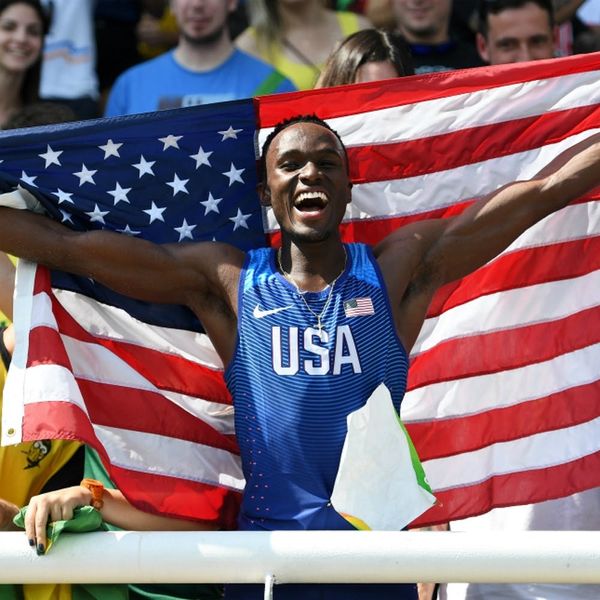 You’d think that with the Olympics starting to wind down we’d all be losing interest, but it looks like Rio’s got no signs of stopping in the excitement department. There’s been all sorts of cool stuff coming out of the games: Two of our fave female athletes, Simone Biles and Katie Ledecky, have made their big debuts as cover stars and, as of today, there have been FIVE proposals at the games, including Chinese diver He Zi’s podium engagement. However, today’s engagement is going to take the gold for the best proposal of all.

Immediately after winning his second consecutive silver medal in the triple jump, Track and Field star Will Claye jumped up into the stands to propose to his girlfriend, hurdler Queen Harrison. Shocked and surprised, she said yes! Why are we loving this proposal more than the others? Well, in the case of He Zi, her boyfriend kinda stole her thunder during her medal ceremony, and while we’re sure she’s over the moon, the dude could have waited until AFTER she got off the podium to propose, right? On the opposite side of things, Will took his moment and flew with it — as if his win could only be better if he was sharing it with Queen. He didn’t steal the spotlight from her when she was competing, and for that, we love it.

This power couple will be one to watch in coming games, and who knows? They probably will make some adorable baby track stars in the future. 2040 Olympics, anyone?

What’s been your favorite proposal of the games? Tell us @BritandCo!

Kat Armstrong
Kat has been a writer, social media maven and mom for longer than she's willing to admit. She's also spent time in front of and behind the camera, interviewing celebs, politicians and acting as a producer for fashion and artistic photography shoots. When she isn't writing for various orgs and publications, she's hanging with her kids, husband and French Bulldog, Peter, in Toronto, Canada.
Engagement
Pop Culture
Engagement Olympics
More From Pop Culture