Morning Buzz! This Olympian Got Engaged After Winning a Silver Medal + More 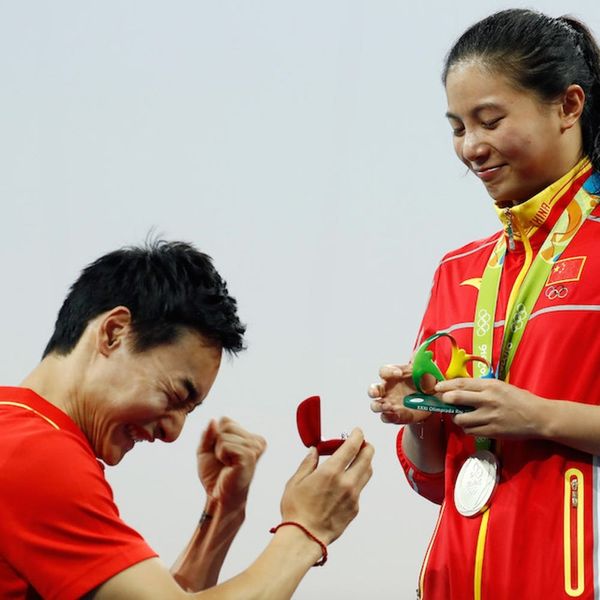 From a tear-jerker Olympics engagement to some pop star relationship drama, check out six of today’s top news items below.

1. Chinese diver He Zi won’t only be taking home the silver in the women’s three-meter springboard — she’ll be taking a gorgeous engagement ring too! After her medal ceremony last night, the two-time Olympian was surprised when her boyfriend (and fellow Team China diver) Qin Kai got on the podium. He THEN got down on one knee to propose. Stunned by the gesture, she managed a shocked nod as her BF arm-pumped in excitement. Adorable!

2. Kevin Hart and Eniko Parrish are married! The longtime couple finally tied the knot this weekend, and we gotta say, these gowns (yes, plural) are absolutely stunning. Both of Eniko’s gowns were custom Vera Wang creations, with her ceremony look featuring a mermaid gown with sheer plunging V-neck lace, and a long sleeve light ivory sheer lace gown for the reception. Congrats to the happy couple!

Congratulations to @tara_alana and @rustolleum in the best wedding ever. Very proud to be a bmaid.

3. Amy Schumer looked stunning as a bridesmaid in her friend’s wedding. Amy has been busy shooting her latest movie in Hawaii, but she still managed to be by her friend’s side as a bridesmaid this weekend. “Congratulations to @tara_alana and @rustolleum on the best wedding ever,” she wrote on an adorable Instagram with the happy couple and her BF Ben. “Very proud to be a bmaid.” It also happened to be Ben’s 30th birthday, with the bride herself taking the time to wish him well on her own Instagram. “Happy 30th birthday to one of our bestest friends @benhanisch,” she wrote. We don’t doubt that Amy and Ben also took time to party it up for his milestone bday.

4. Justin Bieber and Selena Gomez are hashing out some residual ex drama in the Instagram comments. This weekend, Justin Bieber threatened to make his Instagram private if fans didn’t stop hating on his new supposed GF, Sofia Richie. But his ex Selena Gomez just had to weigh in, telling him to keep his private life to himself if he didn’t want people weighing in, and to stop being so mean to his fans. Justin then responded with some sass of his own, saying “It’s funny to see people that used me for attention and still try to point the finger this way.” Not a pretty look, people!

5. The first trailer for Rob Kardashian and Blac Chyna’s new show is here and it is DRAMATIC. FINALLY we get a glimpse inside the headline-causing relationship between Rob and Chyna. The standout clip in this teaser features Chyna screaming “Are you still texting b****es, yes or no!?” into her phone, then cuts to her throwing a bouquet of flowers in a pool. The September 11 premiere can’t come fast enough!

6. Quote of the day: “I’m not doing the Super Bowl. I mean, come on, that show is not about music. And I don’t really… I can’t dance or anything like that.” Adele crushes all of our dreams telling the crowd at her LA show that she won’t be dancing in front of a crazy pyro set up at the Super Bowl.

Who would you like to see perform at the Super Bowl halftime show? Let us know over @BritandCo!