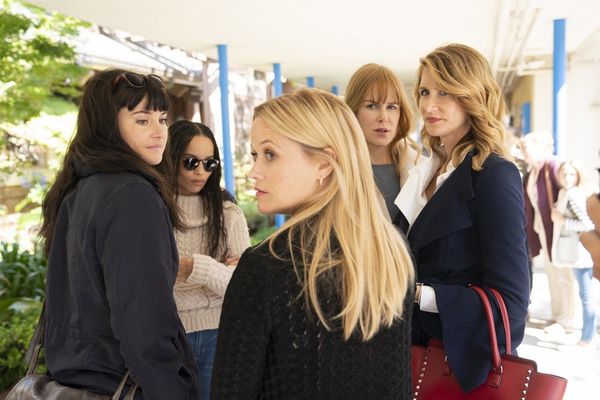 The “Monterey Five” are back! With just hours to go until the long-awaited Game of Thrones season 8 premiere, HBO decided to give us another gift, in the form of the first teaser for season 2 of Big Little Lies.

The teaser shows Madeline (Reese Witherspoon), Celeste (Nicole Kidman), Jane (Shailene Woodley), Renata (Laura Dern), and Bonnie (Zoë Kravitz) attempting to move on with their lives after the shocking events of the season 1 finale. But as they soon find out, their saga is far from over.

“We’re kidding ourselves if we think people will stop talking,” Celeste tells the other women during a covert meet-up in Madeline’s car.

And she’s right. There’s a lot of gossip around the group, and from the sounds of it, it’s not good. At one point, a man approaches Jane to ask if she’s one of the “Monterey Five,” as they’ve come to be known. “Just the way he said it… like we all have scarlet letters on our backs,” she recalls later.

Complicating matters, of course, is the arrival of Perry’s mother, played by Meryl Streep. “My son is dead. I want to know what happened that night,” she tells Celeste. “I’m very tempted to ask you, but I… I don’t think I would get the truth, would I?”

The teaser also reveals the season 2 premiere date, so mark your calendars for June 9.

RELATED: Laura Dern on the Surprising Connection Between ‘Big Little Lies’ and the Fight for Equal Pay