16 Must-Read New Books According to Your Hogwarts + Ilvermorny Houses 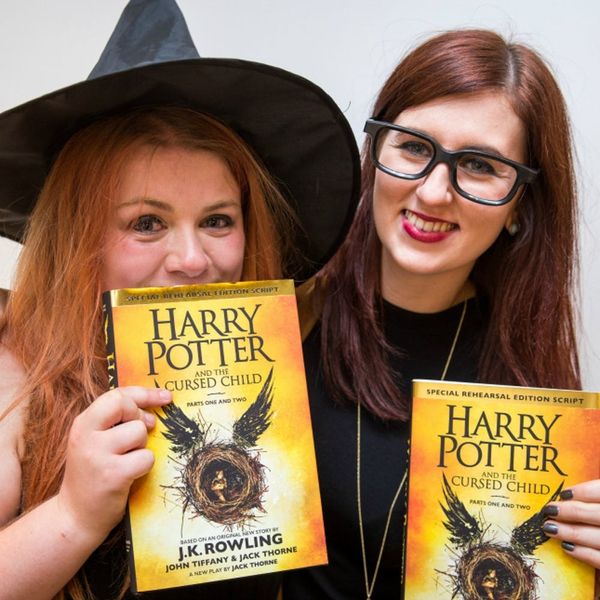 Unless you’ve gone full Muggle, it’s impossible to miss the ginormous comeback that Harry Potter and the Wizarding World has had in 2016. With a brand new play featuring adult versions of the famous trio, a new American school of wizardry (with its own online sorting ceremony, of course), the upcoming Fantastic Beasts movie AND three new Harry Potter ebooks set to drop in early September, we’re loving the nostalgia attached to this magical flashback.

1. I Almost Forgot About You by Terry McMillan ($19): Just like a true Gryffindor, Dr. Georgia Young sets off on the adventure of a lifetime by quitting her job, moving house and starting a wild ride to rediscover who she really is.

2. Lucky Strikes by Louis Bayard ($10): With a deadbeat dad and a recently passed mother, poor Amelia has to come up with a way to save her and her siblings from the foster care system, fast. Good thing she has the daring spirit of a Gryffindor to help her fight this tough battle.

3. Lily and the Octopus by Steven Rowley ($18): A heartwarming read about man’s best friend, this inspirational novel will definitely tug at any Hufflepuff’s craving for loyalty.

4. Attachments by Rainbow Rowell ($9): When Lincoln becomes Internet Security Officer at his new job, he didn’t expect to spend all day reading other people’s emails. Or to fall in love with someone based solely on their e-communication…

5. Lab Girl by Hope Jahren ($16): Any Ravenclaw chick will swoon for this awesome tale of a hardworking woman in science. Detailing her research, her passion and her fascinating life, we almost guarantee it’s on Cho Chang’s reading list.

6. The Book That Matters Most by Ann Hood ($17): A true Ravenclaw never leaves the house without a book, which is why this awesome novel by Ann Hood is a sure winner. After Ava’s life falls apart, she joins a book club which prompts her to find the one book that matters most to her — AKA the most impossible task in the world.

7. You Will Know Me by Megan Abbott ($12): Ambition, ambition, ambition — that’s all that’s important to Katie Knox and her daughter Devon, a young Olympic hopeful. Focusing on the cutthroat world of high-level athletics, this read will make any Slytherin’s heart skip a beat.

8. Sweetbitter by Stephanie Danler ($15): Taking us into the fascinating world behind one of the best restaurants in NYC, this fast-paced novel about a hardcore girlboss who’s set on learning her craft will inspire any cunning Slytherin to follow their dreams.

10. Rabbit Back Literature Society by Pasi Ilmari Jääskeläinen ($22): If you consider yourself a bibliophile and you haven’t binge read this awesome novel, stop everything you’re doing RIGHT NOW. With an elite literature society, a treasure trove of mysterious secrets and an awesome protagonist, it’s just the thing to inspire you to create a literature society of your own.

11. On Such a Full Sea by Chang-Rae Lee ($12): A magical panther-like creature that’s almost impossible to kill, this Ilvermorny house loves its warriors. In this awesome novel by Chang-Rae Lee, a future America is despondent and riddled with labor colonies. One young girl must fight her way through the instability on a legendary quest that almost rivals searching for Horcruxes.

12. A Game of Thrones by George R. R. Martin ($10): Whether you’re obsessed with the television series or a G.R.R. Martin newbie, this epic tale of battles, mystery, romance and adventure is sure to delight any brave Wampus.

13. A World Without You by Beth Revis ($8): Known for their heart and their healing abilities, people in the Pukwudgie house will instantly fall in love with this stunning novel by Beth Revis. An inside look at the mind of someone struggling with grief and delusions, it’s a completely transporting read that will definitely feature prominently on your bookshelf for years to come.

14. Before We Go Extinct by Karen Rivers ($12): After watching someone he loves die before his eyes, J.C.’s pain is only lessened by watching endless documentaries about ecological destruction and texting his dead best friend. Pukwudgies, get ready to stay up all night with this one.

15. Homegoing: by Yaa Gyasi ($11): Favoring adventurers (the Thunderbird itself is a fantastic magical beast that can create storms as it flies), Thunderbirds everywhere will want to read this epic tale of the visceral history of American slavery over and over again.

16. To the Bright Edge of the World by Eowyn Ivey ($20): Taking the term adventurer to a new level, decorated war hero Colonel Allen Forrester leads a seemingly impossible expedition through the Wolverine River to the untamed Alaska Territory in this fantastic read.

Have you read any of the books on your Hogwarts and Ilvermorny reading list? Tweet us by mentioning @BritandCo.

Ashley Macey
Ashley Macey is a lifestyle freelance writer who loves all things fitness, wellness, and creativity. When she's not exploring her home in the Pacific Northwest with her dog Max, you'll probably find her curled up with a good book and some hot tea. Follow her daily jaunts on Twitter.
Books
Home News
Books Harry Potter