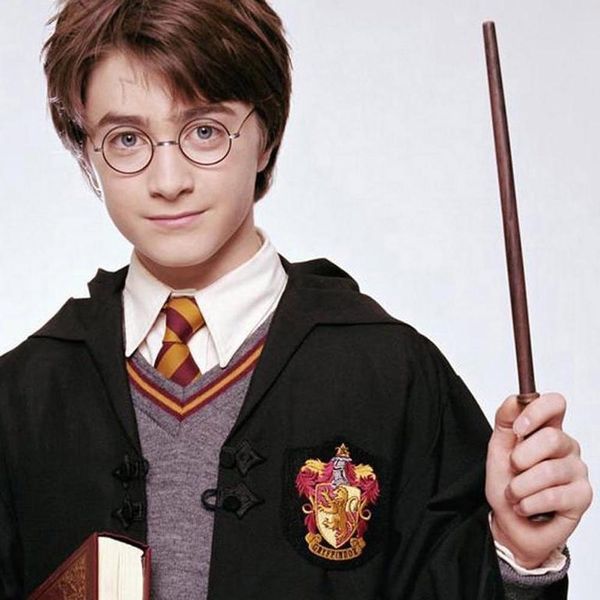 Harry Potter and the Cursed Child is almost here, and to excite and tease us beyond belief, Pottermore is releasing sneak peeks of the actors behind the characters who will be bringing our favorite magical family back to life. With just one week to go until the next chapter of Harry Potter’s life takes the stage in preview performances of the Cursed Child, we’ve been given the first (!!) peek at Harry’s grown-up family. Featuring Harry himself as an adult man, he poses with wife Ginny and son Albus. OMG chills!

For those who are all, “WTF is the Cursed Child?!” here are a few deets: Now a husband and father of three kiddos, as well as an employee of the Ministry of Magic, the dude is feeling totally overworked while also grappling “with a past that refuses to stay where it belongs,” and “his youngest son Albus must struggle with the weight of a family legacy he never wanted. As past and present fuse ominously, both father and son learn the uncomfortable truth: Sometimes, darkness comes from unexpected places.” Sounds like a very compelling tale!

With Jamie Parker in the role of Harry, J.K. Rowling says of the actor via Pottermore that he “simply is Harry now. There’s a kind of relief in watching him, he gets it so right.” And if you’re wondering why Harry is wearing a muggle-like suit and not wizardly robes, the man behind the new portrayal explains, “He’s wearing a suit because he’s a Ministry man, but he’s not just a bloke in a suit, that’s way too anonymous. And it sounds strange but we talked around a lot of different suits, because there are suits and suits, and a lot of them we put on and we went ‘Mmm it’s just not right.’”

He also added, “With all the character’s costumes we want them to be instantly familiar when people see them, so that people feel like the story’s safe in our hands, and that we’re taking that responsibility seriously.” *phew*

Established actress Poppy Miller will be stepping into Ginny Potter’s shoes, perfectly embodying the character’s red-headed loveliness and determined streak. Although nowadays, Rowling sees her more as “kind and cool, exactly as I imagined her,” also saying, “I think a lot of people would like to have Poppy’s Ginny for a mother.”

The final member of the family introduced in the pics, Harry and Ginny’s son Albus, will be played by young Sam Clemmett. Posing in a school uniform and familiar robes, there are no hints at which house the new Potter belongs to or any other telling details, other than the fact that Sam feels that he’s wearing pre-worn robes. “This is what Albus wears at the start of the show. I had the idea he was wearing James’s — his older brother’s — hand-me-downs. So I wanted him to feel quite uncomfortable, and be able to play with his clothes.”

When asked about casting Sam as Albus, J.K. Rowling tightened her lips, claiming revealing more about the performance would be heading into spoiler territory. Oh well, we’ll just have to wait with the rest of the magic-lovin’ world until the Cursed Child is released upon ready-and-waiting fans. Premiering in London, we can only hope that it will make an appearance on this side of the pond, but until then we’ll keep ours fingers crossed that the rumors that the script will be available for purchase are totally true.

What do you think about the actors cast as Harry Potter and his family? Tweet us @BritandCo!

Desiree O
Desirée O is a ‘Professional Bohemian’ who loves anything and everything related to the arts, entertainment, and pop culture. She ADORES being a ‘Newsy’ for Brit + Co, covering all of the latest tidbits of awesomeness that you want to read about. When she’s not writing, she’s either making messy art, going on long adventurous walks with her camera, or poking around over at bohemianizm (http://www.bohemianizm.com/). You can find out about Desirée O and her work at http://DesireeO.com/ or follow her on Twitter @DesireeO.
Harry Potter
Entertainment
Harry Potter
More From Entertainment