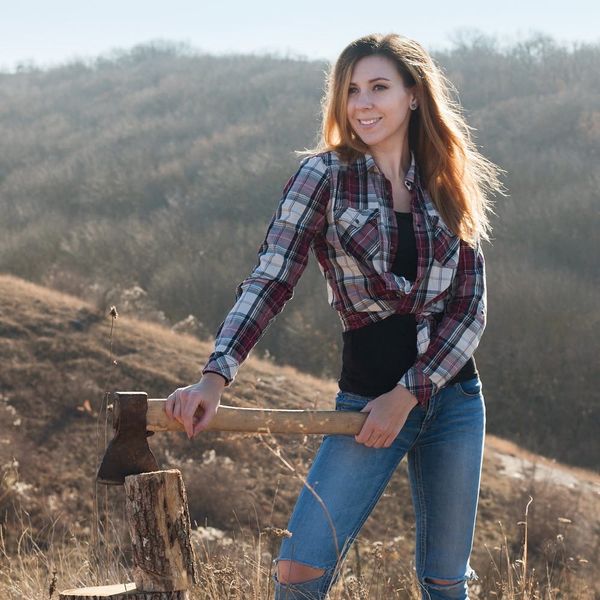 If you’re still feeling totally inspired by the recent history-making Women’s March, then get ready to feel that vibe all over again as International Women’s Day gets closer. While we look back at the women who’ve fought for our rights in the past and those who are continuing the noble fight, Brawny is celebrating Women’s History Month and International Women’s Day by ditching their lumberjack dude for the month of March and introducing a league of lady lumberjacks (who happen to be IRL STEM stars) in his place.

Through their #StrengthHasNoGender campaign, your fave paper towels brand is “highlighting the bold accomplishments of women who exhibit strength and resilience and have broken down barriers in traditionally male-dominated professions.” Featuring women who work in the science, technology, engineering, and math (STEM) fields, the “lumberjacks” are a group of pretty darn impressive ladies.

Patty Lopez, PhD is a platform applications engineer at Intel who has released more than 50 products across five business lines over her career and holds seven imaging patents.

Dr. Anna Kornbrot is an oral surgeon and clinical assistant professor of OMFS at Penn Dental School who was the first woman to graduate from Columbia College.

Brittany Wenger was the first place winner in the 2012 Google Science Fair who developed the app Cloud4Cancer, a breast cancer diagnosis test.

The special IWD packages will be available in Walmart stores during Women’s History Month, while the company will also be making a $75,000 donation to fund STEM education for Girls Inc. participants. They’ve also released a video titled “Breaking Barriers,” which highlights the amazing accomplishments of women including Harriet Tubman, Amelia Earhart, and Serena Williams. Nicely done, Brawny! And thank you to all of the brave women who have forged roads ahead of us!

Who inspires you most? Let us know @BritandCo!

From Your Site Articles
Desiree O
Desirée O is a ‘Professional Bohemian’ who loves anything and everything related to the arts, entertainment, and pop culture. She ADORES being a ‘Newsy’ for Brit + Co, covering all of the latest tidbits of awesomeness that you want to read about. When she’s not writing, she’s either making messy art, going on long adventurous walks with her camera, or poking around over at bohemianizm (http://www.bohemianizm.com/). You can find out about Desirée O and her work at http://DesireeO.com/ or follow her on Twitter @DesireeO.
Pop Culture
More From Pop Culture