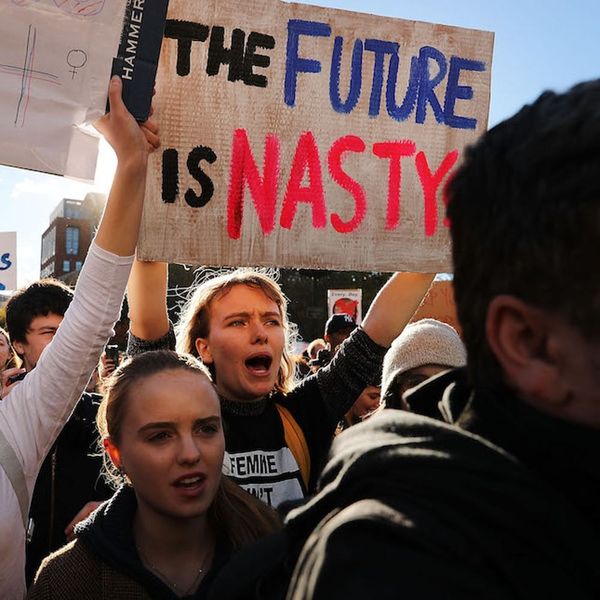 The day after Donald Trump was elected President, a march in protest on Washington sprung up as an event on Facebook and very quickly had over 40,000 planning to attend, with over 100,000 marked as interested.

Originally called the Million Women March and planned for the day after Trump’s January 20 inauguration, the event, now known as the Women’s March on Washington, has become a full-on movement that’s expected to draw around 200,000 people (some of whom will even be traveling to the US for it). The mission of the march is to “stand together in solidarity with our partners and children for the protection of our rights, our safety, our health, and our families.”

With well over a million more people planning to march in over 600 solidarity sister marches around the world, as well as with celebrity support from the increasingly politically outspoken Katy Perry, Amy Schumer, Cher and many, many more, the March is already making history, joining generations of hard-won victories, rallies and major milestones for women. Here are a few key moments to also keep in mind when marching with and for your sisters this weekend.

1. Abigail Adams’ letter (1776): Abigail was an early champion of women’s rights. In a letter to her husband John Adams, who later becomes the second US president, she famously urged lawmakers to “remember the ladies” when fighting for independence from Britain. The letter included this fire quote that still, sadly yet inspiringly, feels just as relevant: “If particular care and attention is not paid to the ladies, we are determined to foment a rebellion, and will not hold ourselves bound by any laws in which we have no voice or representation.” Told you: fire emojis.

2. The Seneca Falls Convention (1848): Spanning two days in July, the first women’s rights convention took place in Seneca Falls, NY, to “discuss the social, civil and religious condition and rights of woman.” At the convention, co-organizer Elizabeth Cady Stanton, a leading figure of the early women’s rights movements, presented her Declaration of Sentiments, which many credit for initiating the women’s suffrage movement in the US.

3. The Suffrage Protest (1913): One of the suffrage movement’s biggest and most well-known protests happened the day before Woodrow Wilson’s Presidential Inauguration in 1913. Approximately 8,000 women seeking voting equality marched past the White House, with many being assaulted and injured by onlookers opposing the campaign. The violence against the protesters resulted in outrage and a deeper support for the suffrage movement.

4. Women Get the Right to Vote (1920): The 19th Amendment to the US Constitution is ratified, giving (some) women the legal right to vote. It’s worth noting that the first women’s suffrage petition was presented to UK Parliament in 1832.

6. Civil Rights Act (1964): Although some US women gained the right to vote in 1920, African-American women in some Southern states remained subject to unfair voter registration requirements. It wasn’t until the Civil Rights Act was signed into law by President Lyndon B. Johnson in 1964 (1964!) that they were able to freely exercise their rights too.

7. “Bra Burning” (1968): In 1968, a group of women protesting the Miss America pageant in Atlantic City threw what they saw as items of feminine oppression, such as makeup and, yep, bras, into a trash can. It was widely rumored that the trash can was set on fire, hence the myth of the bra-burning feminists that remains to this day. No fire was ever actually set, but the protest — and therefore feminism’s second wave — got tons of press and attention.

8. The Ladies’ Home Journal Sit-In (1970): How’s this for some inspiration: In March 1970, approximately 100 women stormed the Ladies’ Home Journal offices to protest the way the male-run magazine portrayed them, demanding the resignation of then Editor-in-Chief John Mack Carter in favor of an all-female editorial staff. They refused to leave for 11 hours, when John agreed to give the protestors their own section of the August issue. Three years later, senior editor Lenore Hershey took over as Editor-in-Chief of the magazine.

9. Equal Rights Amendment Marches (1970s): Passed by Congress in 1972, the ERA (which sought to guarantee women the same rights as men — how novel!) had 10 years to be ratified by 38 states, but some states stubbornly resisted, sparking many demonstrations throughout the decade. The biggest happened on Mother’s Day in 1980, when 90,000 people demonstrated in Chicago in support of the amendment. The marches remain a major effort of the modern women’s movement.

13. Violence Against Women Act (1994): Signed by President Bill Clinton (and under the leadership of then-Senator Joe Biden) in September 1994, this act provided funding and legislation for the investigation and prosecution of domestic and sexual violence against women.

14. Million Mom March (2000): Held on Mother’s Day in May 2000, hundreds of thousands of people showed up for this word-of-mouth, grassroots protest at Washington’s National Mall to advocate for more strict gun control, displaying the names of over 4,000 victims of accidental child firearm deaths. With the marches that followed in other cities, the Million Mom March brought out almost a million protestors.

15. March for Women’s Lives (2004): President George W. Bush’s anti-abortion policies brought somewhere between 500,000 to 800,000 people to Washington to march for women’s reproductive rights and to protest Bush’s reelection. The March was supported by the likes of Julianne Moore and Susan Sarandon, among others. Bush served a second term.

16. Slutwalk (2011): Though the Slutwalk originated in Toronto after a police officer said women shouldn’t “dress like sluts,” more than 50 sister walks have taken place in major cities around the world. Amber Rose has specifically brought a ton of visibility to the Walk through her annual LA SlutWalk.

17. Lilly Ledbetter Fair Pay Act (2009): The gender pay gap took another small but important hit when Obama signed the Lilly Ledbetter Fair Pay Act into law in 2009, allowing employees to file lawsuits regarding equal pay for up to 180 days after receiving a discriminatory paycheck. It was during Lilly Ledbetter’s time as a production supervisor at an Alabama Goodyear tire plant when she filed an equal-pay lawsuit regarding pay discrimination under the Civil Rights Act of 1964.

18. Black Lives Matter (2013): BLM was founded by a group of female activists in 2013 after George Zimmerman was acquitted for the shooting death of Trayvon Martin, and has surged in scope as the police killings of African Americans became a bigger part of the national conversation in the years following. The hashtag #SayHerName was also launched to focus on violence against black women and girls, and names like Rekia Boyd, Sandra Bland and Kayla Moore also got due attention in the conversation.

19. Women’s Expanded Roles in the Armed Forces (2016): Defense Secretary Ash Carter finalized the allowance of women to have any job in the armed services, pending the passing of non-discriminatory performance tests. The move opened up approximately 220,000 jobs to women.

Will you be attending or supporting the Women’s March on Washington? Let us know over @BritandCo.