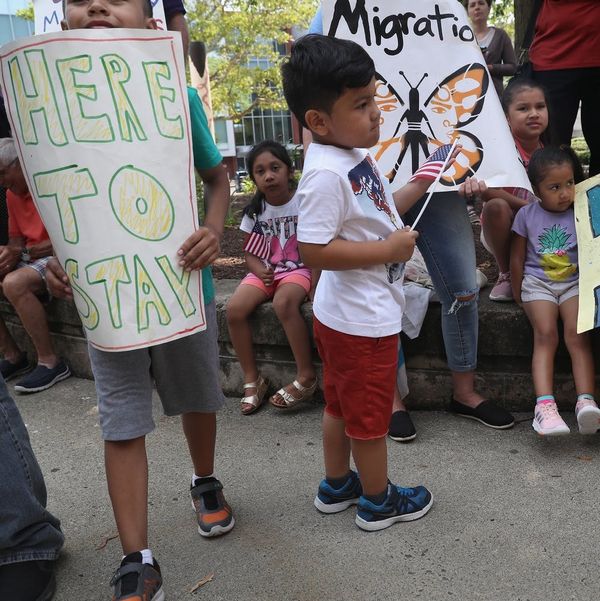 As national outrage over the Trump administration’s “zero tolerance” immigration policy at the southern border continues, the administration has said it will speed up the process of reuniting families. Politico reported Friday that the administration filed court documents that state it will cut out some of the steps it had been using to reunite families with children under five years old.

Following an American Civil Liberties Union lawsuit, a judge ordered the administration to reunite families with children under five by July 10. But only about half of those families have been reunited so far. The administration cited logistical and legal reasons for why the remaining families are not yet back together.

Now, the administration is staring down a July 26 deadline to reunite families who have children ages five and over. The court documents filed Friday specify that the Department of Health and Human Services currently has 2,551 immigrant children between five and 17 in its custody. Previously, the HHS would only estimate that it was detaining “under 3,000” minors over five years old.

In order to speed up the reunification process, the administration claims in court documents that it will stop using time-intensive DNA testing and fingerprinting to find separated family members. This protocol was put into place because the administration previously made no plan for getting separated children back to their parents.

The new plan, according to the court documents filed on Friday, is for ICE to set up between four and six reunification sites where parents will be interviewed for 15 minutes. If parents clear the interview stage, the HHS will bring family members to the same ICE site within 48 hours. At that point, custody of the children will be transferred from the HHS to ICE.

Looking at the long-term, the Trump administration has committed itself to indefinite family detention.

The same judge who ordered the deadlines for family reunifications, U.S. District Judge Dana Sabraw, chastised the administration on Friday for its failure to get families back together. The HHS claimed that working quickly to reunify families would put children at risk, but Sabraw wasn’t buying this argument.

According to the New York Times, Sabraw responded to the HHS’ excuses saying, “Unfortunately, HHS appears to be operating in a vacuum, entirely divorced from the undisputed circumstances of this case.”

Meanwhile, the American Civil Liberties Union won a stay on family deportations for families who were forcibly separated at the border. Judge Sabraw ruled Monday that the administration can’t deport separated family members through July 23. On that date, there will be another hearing to determine what can or can’t happen next with deportations.

Deputy director of the ACLU’s Immigrant’s Right Project said in a statement: “[Sabraw] once again made clear that the government unconstitutionally took these children away, and now must do everything in its power to reunite them safely and by the deadline.”

With the clock ticking and the world watching, there’s at least some pressure on the administration to get separated families back together. However, the administration failed to fully meet the first deadline and doesn’t have a clear plan for how to make sure all children and their parents are reunited in time. It remains to be seen how many families will actually get back together.

Elizabeth King
Elizabeth King is a politics, history, and culture writer based in the Twin Cities. She is generally pretty cranky but still enjoys traveling, music from the early 2000's, and plotting the resistance. Feel free to say hi on Twitter at @ekingc or check out some of her work at www.elizabethcking.com.
Controversy
Current Events
Controversy Immigration Politics