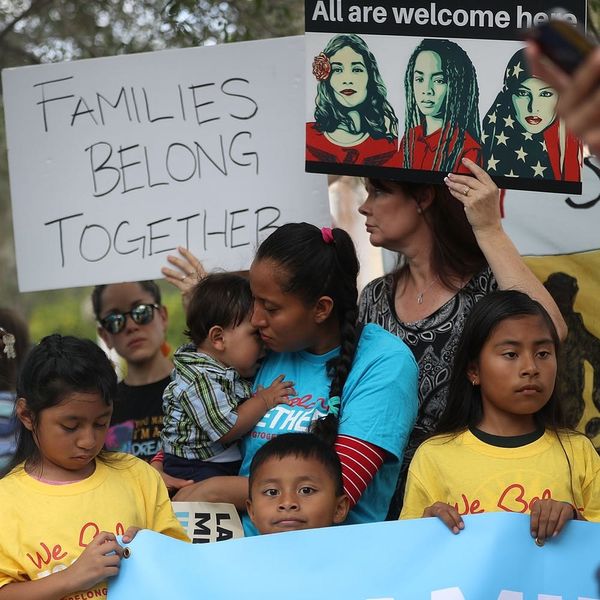 Sofia Casini was just leaving the T. Don Hutto detention facility in central Texas — where she had posted bond for a detained migrant mom — when she spoke to us about the government’s promise to reunite migrant families.

“Based on what I’ve heard from mothers, the government had no intention to reunite families in the first place,” Sofia Casini tells us.

Casini is a campaign organizer for Grassroots Leadership, a non-profit that fights against for-profit prisons and detention centers. She tells Brit + Co that there is “desperation” among mothers at Hutto who have been separated from their children.

Casini’s assessment that there is no official plan to reunite families comes after the Department of Homeland Security (which oversees ICE), released a thinly outlined plan to reunite families. Over the weekend, the DHS released a “Fact Sheet” regarding “zero tolerance prosecution and family reunification,” which came on the heels of a Friday report that the DHS created an “unaccompanied children reunification task force.”

According to POLITICO, the task force was created by the Assistant Secretary for Preparedness and Response, a division that typically handles public health crises. The internal document that POLITICO obtained states that the task force will assist “the ACF Office of Refugee Resettlement with Unaccompanied Children Reunification.” But migrant parents and advocates say that it’s hard to tell what that process will actually look like, or whether a change is in motion yet at all.

The “fact sheet” states that the DHS and the Department of Health and Human Services “have a process established to ensure that family members know the location of their children and have regular communication after separation to ensure that those adults who are subject to removal are reunited with their children for the purposes of removal.” The fact sheet does not clarify what this “process” even is, or when families can expect to be reunited.

The sheet adds that Customs and Border Patrol has reunited 522 migrant children with their parents. Casini says that it’s true some families have been reunited, but that it’s important to understand the circumstances.

She explains, for example, that the mom she posted bond for on Tuesday morning will be reunited with her children, who are already with her husband. The mother and her family have lawyers and advocates working on their behalf, which is necessary given how complicated and unclear processes are at this time. But not all families will have the exact right circumstances or resources to be reunited the way things are currently operating.

Maria Hinojosa, a journalist and founder of the Futuro Media Group, has echoed Casini’s doubts about the administration’s intentions. Hinojosa tweeted Monday morning that she spoke with people at the “top level” of two shelters helping migrants, and there’s a general sense that the administration doesn’t actually have a plan for family reunification.

Even after 32 parents who were separated from their children were freed from detention on Monday in Texas, there is still a lack of understanding as to how they will end up back with their kids. The parents who have been released have said they do not know where their kids are being detained or if they will in fact be reunited with them, according to the Associated Press. The parents are currently receiving services from the Annunciation House in El Paso.

Casini says that at Hutto, where she has worked with a few dozen moms, most parents do not even know where their children are. “If they do know where [their kids] are,” she says, “they have no way of getting in contact with them.”

Further actions by the DHS and ICE indicate that family deportations and detention are still the top priority for this administration. The fact sheet states that parents who are ordered to be deported “may request that his or her minor child accompany them.” Some parents are already being told that they can get their detained children back, but only if they agree to leave the US via “voluntary deportation.” An asylum-seeker from Honduras who spoke to the Texas Tribune anonymously said that he gave up his case for asylum out of “desperation” to be with his child.

Casini says that this promise has proven to be a lie for migrants she has heard from.

“One caregiver, who raised her brother like a son, was told that if she agreed to voluntarily deport, she would be reunited with her brother,” Casini tells us. “She signed the papers, then was told she would not be able to see her brother.”

Casini adds that some parents were told that they could see their children if they confessed to criminal charges, only to later find out their children had already been taken away.

Family detention update: @ICEgov has issued an RFI "seeking information regarding potential facilities to accommodate up to 15,000 beds." For context, the current family detention capacity is ~2400. https://t.co/cLRj3INpP2

The same day that POLITICO obtained the document regarding the reunification task force, New York Times immigration reporter Caitlin Dickerson tweeted that ICE made a request for information “regarding potential facilities to accommodate up to 15,000 beds.” Dickerson added that “The current detention capacity is [around] 2,400.” This indicates that ICE could be seeking to incarcerate an additional 12,600 migrants who are members of families.

Asked what’s next, Casini says that the fight for migrants’ rights must continue, and that detention centers must close down. Noting that Williamson County commissioners voted today to end the contract they hold with ICE for the Hutto detention center, she says community members need to “keep speaking out loudly about what’s happening in these detention centers, and push counties to close centers.”

Elizabeth King
Elizabeth King is a politics, history, and culture writer based in the Twin Cities. She is generally pretty cranky but still enjoys traveling, music from the early 2000's, and plotting the resistance. Feel free to say hi on Twitter at @ekingc or check out some of her work at www.elizabethcking.com.
Activism
Current Events
Activism Controversy Immigration Politics
More From Current Events