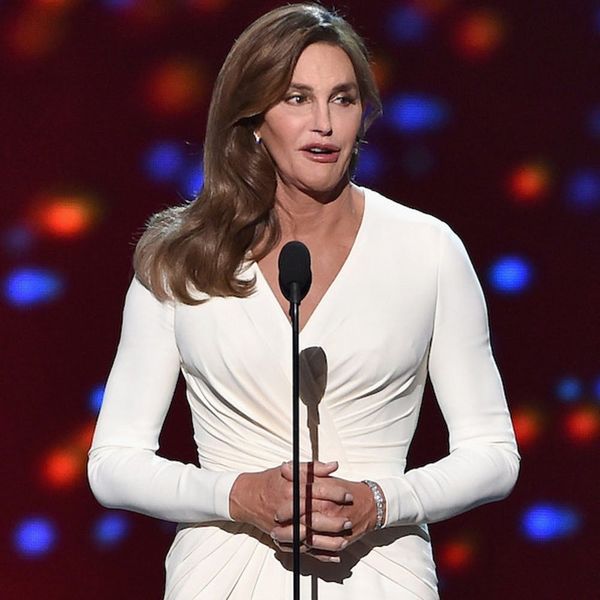 All eyes were on Caitlyn Jenner last night as she attended her first major award show since her transition. Yes, her dress was gorgeous (a little more on that later), but the defining moment from her appearance at this year’s ESPYs was undeniably the touching speech she gave after recieving the Arthur Ashe Courage Award.

Caitlyn, whose entire family was there to support her, began her speech with a few jokes about how she finally realizes just how difficult it is for women to prep for an occasion like the ESPYs. She then moved on to a more serious note telling the audience about two young trans people. Without stumbling on a single word, Caitlyn says that she’s here to “promote a very simple idea: accepting people for who they are.” She tells the camera, “Trans people deserve something vital. They deserve your respect.”

Caitlyn teared up as she thanked her family for being so supportive, but then regained her composure by boldly ending her speech with, “If you want to call me names, make jokes, doubt my intentions, go ahead – because the reality is, I can take it.”

Caitlyn’s speech was obviously the most important part about her appearance at the ESPYs, but we do have to mention how utterly gorgeous she looked. The 65-year-old Olympian stunned in a long-sleeved, white gown by Versace. To prep for the event, Caitlyn borrowed a little something from Angelina Jolie — the actress’ stylist Jen Rade.

Rade is responsible for Angelina’s infamous high-slit Versace dress as well as that Marilyn Monroe inspired cream number she wore to the Oscars in 2004. Before last night’s award ceremony, Jen tweeted, “I have to say my heart is POUNDING WITH EXCITEMENT for the world to see what I have seen!!! Only a few more hours!”

Whether she’s giving us fashion inspiration or touching our hearts with her compassionate words, Caitlyn has proven herself to be not only a leader in the transgender community, but an ideal role model to anyone who values kindness, acceptance and most importantly, courage.

What was your favorite moment from last night’s ESPYs? Share with us in the comments below.

Cortney Clift
Cortney is the senior writer and special projects editor at Brit + Co. She typically covers topics related to women's issues, politics, and lifestyle. When she's not buried behind her computer you'll find her exploring New York City or planning her next big adventure.
LGBTQ
Celebrity News
LGBTQ
More From Celebrity News