20 Celeb Selfies That Sum Up the Grammys 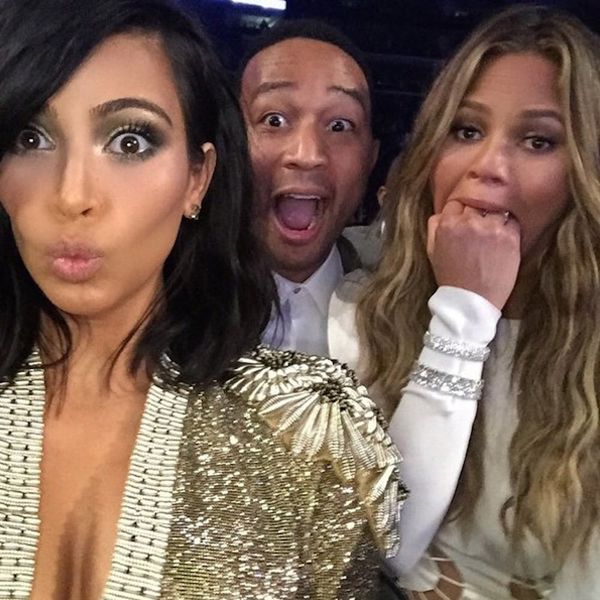 The Grammys were interesting, to say the least. There were awkward moments (why you have to be like that, Kanye?), some Pinterest ready moments (Beyoncé and Katy Perry looked absolutely angelic) and Taylor Swift danced the night away, as usual. While Beyoncé didn’t win Album of the Year, she basically won all of Instagram last night. Check out what she and all the other lyrical gods were posting behind-the-scenes of music’s biggest night.

1. Taylor Swift: We loved Taylor’s mermaid-esque dress and shoes. Also, we can’t help wishing we had grown up with her, too, so we could be her date to award shows. (via @abigail_lauren)

2. Kim Kardashian: After her hubby tried to storm the stage, Kim posted this photo of her posse’s reaction to Beck winning album of the year. Maybe they should’ve been making these faces after realizing that Kanye is still as crazy as he was in 2009. (via @kimkardashian)

3. John Legend: Before following Beyoncé with his song “Glory” from Selma, Mr. Class himself got ready for his captivating performance backstage. (via @johnlegend)

4. Meghan Trainor: While she didn’t win any Grammys, Meghan still had a pretty epic night. She got to meet one of her idols, songwriter Carole King. (via @meghan_trainor)

6. Clean Bandit: The band behind last year’s hit “Rather Be” had a total fan moment during Annie Lennox’s performance with Hozier. We probably would have geeked out too. (via @cleanbandit)

7. Behati Prinsloo: Adam Levine’s wife has a pretty good life, and we’re glad she shares it with us on Instagram. By the way, is The Voice back yet?! (via @behatiprinsloo)

8. Pharrell: Before hopping onstage to perform “Happy,” Pharrell took a moment to thank Chanel for his bell hop outfit. Yup, that is head-to-toe Chanel. (via @pharrell)

9. Ariana Grande: Our favorite ponytail had a total fangirl moment when she met Madonna backstage. Who could blame her? Madonna is an icon. (via @arianagrande)

10. Madonna: But then Madonna kind of ruined that sweet moment for us when she posted this, saying she was holding on to her “Grammys.” Hokay, then… moving on. (via @madonna)

11. Chloe and Halle: This sister duo have been making it so big on YouTube, they managed to get invited to the Grammys and got to hang with some pretty big stars, including HAIM and Jordin Sparks. (via @chloeandhalle)

12. Sam Smith: Crooner of the moment, Sam Smith, cleaned up last night and rightfully so. He even snagged a kiss from Riri, who seemed to have been swallowed whole by a pink tulle monster. (via @samsmithworld)

13. Rita Ora: During a commercial break, Rita says she took a moment to talk to “the boss.” (via @ritaora)

14. Katharine McPhee: There were quite a few American Idol alums at the Grammys last night, including Jordin Sparks, Jennifer Hudson and Katharine, who seems to have made a new BFF in Meghan Trainor. (via @katharinemcphee)

15. Katy Perry/Miley Cyrus: While we were hoping for a few Instas from the Super Bowl Queen 2015, we had to settle with stalking her on other celebrity’s ‘grams. So thanks, Miley, for posting a photo with Katy and our favorite hair color. (via @mileycyrus)

16. Diplo: It seems that Diplo and TayTay have gotten over their little Twitter tiff and partied together after the show. We heard she’s pretty good at shaking things off. (Sorry. We had to.) (via @diplo)

17. Khloe Kardashian: Why does it look like Khloe was the first to arrive at the E! after party? (via @khloekardashian)

18. Kylie Jenner: It’s okay, though, because the Jenner sisters and Tyga showed up to keep her company. (@kyliejenner)

19. The Legends: Quite possibly the cutest couple ever, John Legend and Chrissy Teigen got locked out of their hotel room after the Grammys. But we have a feeling they had no problem getting back in. Kudos for the perfect Insta-moment, though. (via @chrissyteigen)

20. The Carters: The queen of everything, Beyoncé seemed to have no problem racking up the awards last night. So Kanye probably should have just stayed in his seat. Just sayin’. (via @beyonce)

Which celebrity Instagram do you stalk obsessively during awards season? Let us know in the comments!

Amanda DiGiondomenico
Amanda is a freelance writer and graphic designer who blogs about living a stylishly nerdy life at The Spendicate. A lifelong resident of Baltimore, MD, Amanda is an art school dropout, who managed to earn a masters degree in nonfiction writing. On the weekends, she's an expert guacamole maker, a novice jogger and an intermediate yogini.
Beyonce
Party
Beyonce Grammy Awards Kardashians
More From Party