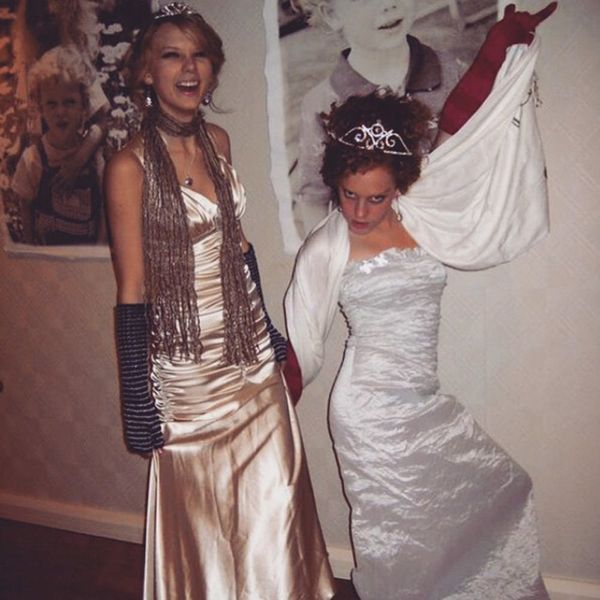 Music’s biggest night has arrived and before all the performances and acceptance speeches go down, the celebs have been celebrating all weekend and sharing via social media. Live vicariously through these famous faces with this Grammy-centric Instagram roundup while you sing along to all the songs being performed on tonight’s big show.

1. Miley Cyrus: She’s just being Miley, rollin’ with her momma. (via @mileycyrus)

2. Sam Smith: Someone is excited to be sitting behind Rihanna (and to perform!). (via @samsmithworld)

3. Taylor Swift: Taylor wins the award for “Best Award Show Date Announcement Ever” for sure. (via @taylorswift)

4. Rihanna: Riri and her glam squad celebrated a win before she even hit the red carpet. (via @badgalriri)

5. Ciara: The R&B diva teased her look, which kinda looks like a record, before she hit the carpet. (via @ciara)

6. Us the Duo: The cute couple is adorably excited to attend music’s biggest night. (via @ustheduo)

7. Usher: Sometimes the hardest choice to make is which pair of shoes to rock. (via @howuseeit)

8. Gwen Stefani: The L.A.M.B. Boss was busy getting painted before the big show. (via @gwenstefani)

9. Jessie J: The singer was looking bang, bangin’ next to the legendary Tom Jones. (via @isthatjessiej)

10. Pharrell: Looks like the “Happy” singer is rockin’ the anti-paparazzi clothing line. (via @pharrell)

11. Jordin Sparks: With a tease like this, we think the singer is going to leave us feeling like we have no air with her look on the red carpet. (via @jordinsparks)

12. Jennifer Hudson: The dreamgirl was looking flawless on her way to rehearsal for her performance with Iggy Azalea. (via @iamjhud)

13. Anna Kendrick: According to the actress it takes a village to prep for the award show. We don’t think she needs all that help. (via @annakendrick)

14. Ryan Seacrest: The man with many jobs was having as much fun as possible while prepping for the red carpet. (via @ryanseacrest)

15. Neil Patrick Harris: The Oscars host on the way to music’s biggest night with husband David Burtka before his big award show duties for film’s biggest night in a few weeks. (via @instagranph)

16. Zendaya: The makeup brush (and the music) is on repeat for the singer pre-red carpet. (via @zendaya)

17. Kelly Osbourne: Yep, the lavender haired lady does more on the red carpet than just asking the celebs, “Who are you wearing?” (via @kellyosbourne)

18. Brad Goreski: Before all the stars hit the carpet, the stylist had a few laughs with his Fashion Police co-host. (via @mrbradgoreski)

19. Giuliana Rancic: All made up and ready to work it for E! on the red carpet. (via @giulianarancic)