The Only Fall 2018 Shoes You Need, According to Celebs 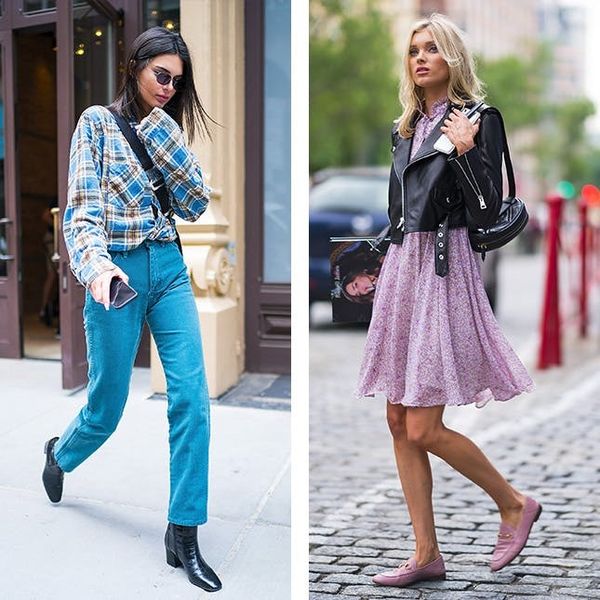 It’s safe to assume that you already have an arsenal of go-to shoes (AKA your perfect black pumps and white sneakers). But do you have the must-have silhouettes of the season? If you’re looking for inspiration on which trends to test out this fall, just turn to your favorite celebrities for inspo. Keep scrolling to check out the eight shoe styles that matter right now, according to fashion A-listers like Gigi Hadid, Priyanka Chopra, Kendall Jenner, and more.
Leopard-Print Booties: We saw animal prints all over the Fall 2018 runways, adorning everything from ready-to-wear to bags to, most importantly, footwear. Follow Gigi Hadid’s lead and slip into a pair of fierce booties with your favorite jeans and top like she wore recently leaving her apartment in New York City. (Photo via Gotham/Getty)
Zara Leopard Ankle Boots ($149): Go wild with this pair.
Menswear-Inspired Flats: Not a heels kind of lady? No problem. To be honest, colorful loafers and brogues are just as stylish as any eye-catching pair of heels this season. Just take a glimpse at Elsa Hosk's ensemble in NYC. (Photo via TheStewartofNY/Getty)
Tibi Carter Oxfords ($450): If you're looking for something a bit more comfy for the office, try these functional yet fashionable statement oxfords.
Mid-Heel Booties: If you love four-inch stilettos, go for it. But if you’re looking to save your feet, try a lower-heeled boot. Kendall Jenner’s mid-heel black boots are sleek and sophisticated with straight-leg jeans and a menswear-inspired shirt like the one she wore dashing around NYC. (Photo via Gotham/Getty)
& Other Stories Leather Chelsea Boots ($149): You'll live in these perfect black booties all season long. They'll go with everything!
Printed Pumps: As Priyanka Chopra showcased in NYC, this fall is all about printed heels. The style is a welcome update to the classic black pumps you’ve had in your closet forever. (Photo via TheStewartofNY/Getty)
Sam Edelman Hazel Pumps ($120): The intricate lace detail and embroidery make these pumps look triple the price.
White Booties: While you can’t deny the power of a classic black ankle boot, fresh white booties popped up last season and continue to grow in popularity. Don't believe us? Just take a note of Tracee Ellis Ross's ensemble leaving 'Jimmy Kimmel Live' in Los Angeles. (Photo via RB/Bauer-Griffin/Getty)
Mango Zipped Ankle Boots ($100): A sleek white pair of pointed stiletto boots add polish to any outfit.
Western Boots: If there’s one trend-forward shoe style that’s reigning supreme this season, it’s the western boot. But don’t be fooled; the styles out there aren’t meant for the cowboy circle. Believe it or not, there’s a slew of elevated styles that can be dressed up for a fancy night out. Proof? Rosie Huntington-Whiteley's choice here for an evening out in NYC. (Photo via Gotham/Getty)
Rebecca Minkoff Kaiegan Bootes ($228): Try these luscious suede cowboy boots with a leather skirt for a cool night-out ensemble.
Snakeskin-Effect Boots: No, don’t worry, we don’t mean real snakeskin here. Rather, an embossed style that has the same effect. This trend has the ability to elevate anything you’re wearing, even a jeans and blouse combo like Kourtney Kardashian wore while out and about shopping in NYC. (Photo via Gotham/Getty)
Topshop Marcel Snake Effect Ankle Boots ($180): The wooden heel gives these snakeskin booties an unexpected twist.
Combat Boots: Show the world you mean business in a sweet pair of combat boots. Given the clunky nature of the silhouette, we suggest trying a lighter hue to soften up the overall look like Bella Hadid wore with her all-white outfit recently in Paris. (Photo via Marc Piasecki/Getty)
Kendall + Kylie Military Boots ($155): Add that extra hint of edge by incorporating these lace-up boots into your fall wardrobe rotation.

Bobby Schuessler
Bobby Schuessler is a contributing fashion writer at Brit + Co and has contributed to Who What Wear, Refinery29, Lucky, Glamour, Out, Nordstrom, and Barneys New York. When he's not writing about style and shopping, you can find him catching up on the latest Housewives franchise and sipping his go-to drink, a vodka martini with a splash of cranberry and a twist.
2018 style trends
Celeb Style
2018 style trends Back To School Style Boots Fall Fashion Fashion Inspiration
More From Celeb Style