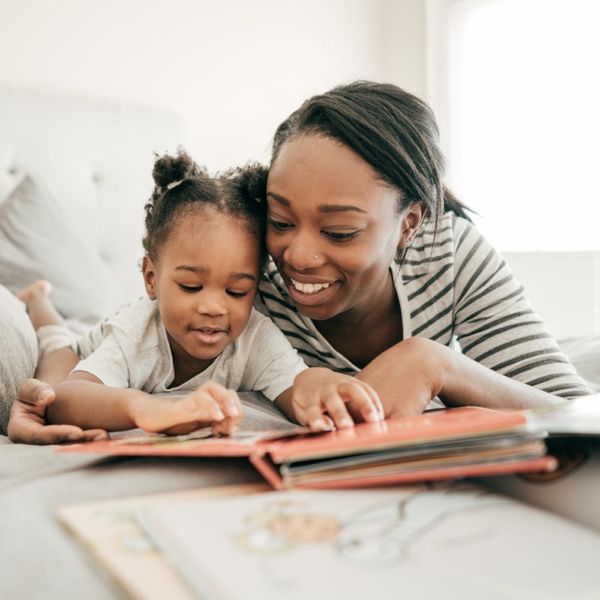 From the Parkland students to the young leaders in the Black Lives Matter movement, it’s clear that the next generation is motivated to speak up for what they believe in. As a parent, building your child’s library with a wide range of books is a great way to expose a young reader to ways they can channel their inner activist, no matter what their age. Many of these books showcase young people who are passionate, determined, and tremendous role models for our kiddos. Here’s a collection of 12 inspiring children’s books that will make a wonderful addition to any budding activist’s library.

Beautifully illustrated by Walsh, this lovely children’s book, geared toward ages two to four, introduces young ones to head coverings worn by people of different religious beliefs. Readers meet a Sikh man who wears a turban, a hijabi Muslim woman, and a Jewish boy and his kippah. As the mom to twin toddlers who are obsessed with hats, I can say that my daughters love looking at the head coverings in this book. It’s a great introduction to faiths from around the world.

Written and illustrated by a father, this alphabet book is a quintessential introduction to social justice. For children ages three to seven, the picture book discusses a wide range of topics through rhyme. My daughters delight in looking for the black cat who shows up on every single page. If you like this book, Counting on Community is another fantastic book focusing on numbers by the same author.

For preschoolers, this bright and colorful book introduces tots to the concepts of friendship, acceptance, and love through simple messages like, “Peace is helping your neighbor.” Parr is a prolific children’s author whose books radiate with positive messages for children.

Paper-cut illustrations by Harris accompany Eggers’ new picture book. The visual story of children working together to turn a lonely island into a thriving community helps young readers see that they can make a difference in their world.

A gorgeous hardcover book follows seven children from Italy, Japan, Iran, India, Peru, Uganda, and Russia for a day to share what they see, do, and eat. My daughters already adore this book, even though it’s geared toward kids ages five to eight. They reveled in learning what other kids eat, exclaiming that they also like bread and pretending to eat the various meals off the page. The section displaying each child’s bedroom brought on a fun debate of what bed we’d most like to sleep in. This is a truly special book that deserves a spot on any aspiring activist’s bookshelf.

This middle reader book for ages 10 to 13 tackles the true story of Fred Korematsu, who was forced to leave his home along with his parents when the US went to war with Japan in 1941 and the US government relocated people of Japanese ancestry to prison camps. Fred refused to go and was put in jail for resisting, and his fight for justice is an inspiring tale.

For children ages 7-10, this is a powerful retelling of four black college students who wanted to eat lunch at the Whites Only counter at Woolworth’s in 1960 but were refused service. The story of this peaceful protest, dutifully expressed by Brian Pinkney’s emotional paintings, is a testament to the power of friends coming together to resist and demand civil rights at a time when their voices weren’t welcome.

Featuring amazing young activists such as Malala Yousafzai, Sylvia Mendez, Nkosi Johnson, Cassandra Lin, and Muzoon Almellehan, this collection of stories for readers ages 8-12 is a wonderful introduction to kids who have truly changed the world.

Illustrated by Quinton Wintor, this anthology features an array of men, some who were bullied or different than their peers, who persevered to become heroes in their own right. Kids will be inspired by rule-breakers like Salvador Dali, Ludwig van Beethoven, Barack Obama, Ai Weiwei, and Jesse Owens.

Authors and celebrities including Lauren Duca, Jesse Tyler Ferguson, and Hamilton‘s Javier Muñoz share hopeful tales of how each person resists and persists. Told through essays, songs, illustrations, and interviews about activism and hope, this guide edited by young adult author Maureen Johnson is meant to motivate teens to tackle the issues that mean the most to them.

Edited by YA novelist Amy Reed, this anthology of 21 essays from a diverse group of YA authors discusses what it’s like to grow up as a girl in today’s America. By speaking truths to their own experiences, these women writers deftly prove that all stories matter and should be told and read.

Written by a National Book Award winner and based on a real-life story, this rousing book shares the tale of 15-year-old Danish teenager Knud Pedersen, who formed a club with his friends to commit acts of sabotage against Nazi Germany. Though the boys in the Churchill Club were arrested, their imprisonment sparked a Danish resistance to what was happening in their own country.
Jennifer Chen
Jennifer Chen is a freelance writer and editor living in Los Angeles. She's written for O, The Oprah Magazine, Good Housekeeping, Real Simple, and several other publications. When she's not cooking delicious vegan meals, she's hanging out with her TV writer husband and twin girls.
Activism
Creativity
Activism Books Empowering Girls Goods inspiration Parenting
More From Creativity