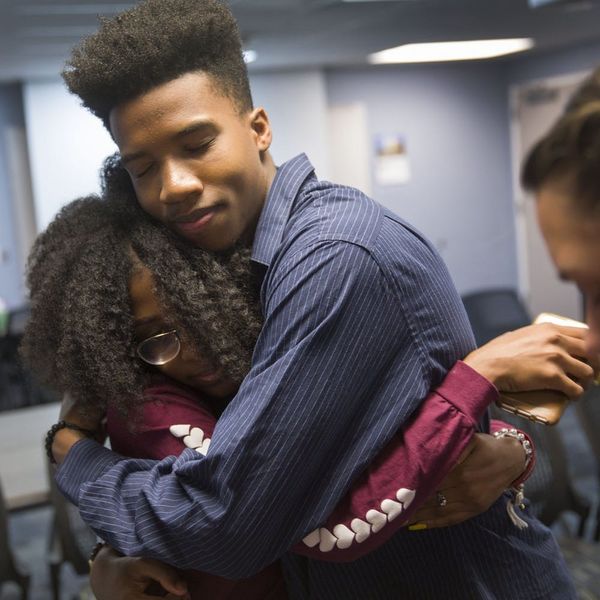 The Brit + Co Community Voices series aims to showcase a variety of viewpoints from our diverse audience in their own words.

On February 14, 19-year-old Nikolas Cruz shot and killed 17 people with a semi-automatic rifle at Marjory Stoneman Douglas High School in Parkland, Florida. The attack elicited a nationwide response and jumpstarted activists from all over the country who began organizing marches, vigils, and protests to end gun violence. Celebrities, politicians, and other people in positions of power spoke out against the dangerous influence of the NRA using various social media outlets. Large media networks like CNN facilitated and broadcasted town hall meetings between the survivors of the shooting, their elected officials and members of the NRA in order to hold them accountable for their lack of response on the matter.

On March 14th, a nation-wide walkout was organized where students from all over the country left their classrooms from 10:00 am to 10:17 am, one minute for every student that lost their life in the Parkland shooting. Viacom media network suspended programming of many of its channels such as MTV, Nickelodeon, TV Land, CMT, and Comedy Central for 17 minutes on that day in solidarity with the students walking out. As a result of the mounting pressure, major companies including Delta Airlines, Enterprise Rent-A-Car, and Hertz cut off ties with the NRA and discontinued various discounts and perks they has previously offered to members. On March 24, enormous crowds from all over the world took to the streets and demanded that gun control be made a priority.

The surge in activism over the issue of gun violence in America, especially by youth in the country is extraordinary, but as we raise our voices for this cause we must not forget about another group who suffers disproportionately from gun violence: people of color during incidents of police brutality.

If in our fight for gun control we narrow our focus to only one part of the issue, we miss another important piece of the problem that needs to be addressed. Black Lives Matter activists have long been vocal in condemning gun violence at the hands of police officers, yet have not received nearly as many resources or as much support we see in today’s March For Our Lives movement. The work done by the Parkland survivors and the national response they have elicited is very much needed, but it is also essential that we understand and give space to not only the history of the causes we take on, but their full scope, and include the voices and struggles of all those who have fallen victim to the ills we attempt to combat.

This is in no way an attempt to criticize the work that is being done by these incredible young activists, rather an attempt to strengthen it. It is troubling to see that a threat which has claimed the lives of all too many African Americans and minorities is only now taking center stage after its effects have reached an affluent, predominantly white community like Parkland, Florida.

If the source of our outrage after Parkland is the targeting of children, it would do us well to question why that outrage wasn’t as potent when 12-year-old Tamir Rice was gunned down in a public playground, when seven-year-old Aiyana Stanley-Jones was shot and killed while sleeping in her bed, or when 17-year-old Trayvon Martin was killed because his choice of clothing was deemed suspicious. The list goes on and on. On March 20th, Sacramento police officers shot and killed 22-year-old Stephon Clark in the backyard of his grandmother’s home. He was shot 20 times. Clark’s story is not unique or new. From the shooting of Amadou Diallo to Philando Castile and many others, hundreds of Black men have been shot down, in the past three years alone, by police officers who claimed that they were posing a threat.

If anything, the consistent gunning down of Black men by law enforcement should have raised red flags over the dangers of gun violence long ago, because it highlights an additionally pressing concern: that those equipped with training and weapons to protect and serve our society are turning around and unleashing those tools on the very people they were entrusted to protect.

If individuals who are tied to, and backed up by, a government institution feel professionally compelled to carry out an illegal act, it brings into question the training and values upheld by such institutions. It’s an uncomfortable truth, but one that needs to be acknowledged if our call against gun violence is to ever truly ensure everyone’s safety and security.

Gun violence is gun violence no matter who perpetrator or victim is, and we cannot allow our activism to be color coded. It is imperative that all movements be evaluated in an intersectional manner to ensure that we are addressing how these issues affect all who are involved.

The surge in recent activism is critical if we are to address this issue of gun control, but if we fail to acknowledge all those who suffer, we will continue to fail at fixing the issue.

Nehal Naser is an International and Women’s studies student at the City University of New York, an intern at Amnesty International, and a mother to her two young children.