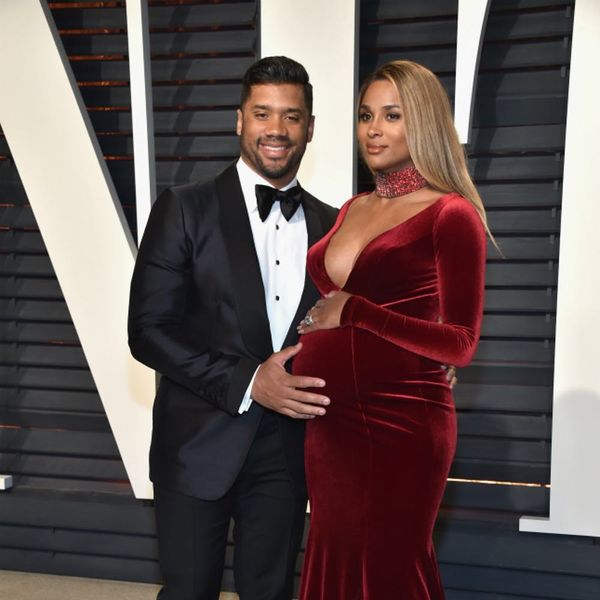 What a year for celebrity babies! Hot on the heels of Beyoncé’s pregnancy announcement, we got announcements from Amal Clooney and Rosie Huntington-Whiteley, and while we already knew that singer Ciara was pregnant with her second child, we were not expecting THIS: a recent Harper’s Bazaar photo shoot the singer teased on her Instagram account today. And it turns out the rest of the internet wasn’t expecting it either… and they’ve lost their collective minds over the saucy snap.

Ciara famously has a child with rapper Future, and her new relationship with Russell Wilson has many Future fans up in arms, especially since Wilson has featured so prominently in Ciara’s online life with her son, also named Future.

With one of her latest Instagram pics, however, the internet has exploded, both with anger and curiosity over the, well, unique family photo and outtake from her Harper’s shoot.

The snap features the singer, Wilson, and son Future, and has the caption “Just the 4 of us.” It’s a beautiful photo, but the internet isn’t exactly on board with the message.

Y'all: I wonder how Future feels about this 🤔

Some people, however, are just sick of the drama and wonder why everyone cares so much.

Y'all always fake mad at Ciara for living life & being happy🙃

The photo shoot itself is really beautiful, but we’re not sure that Ciara will ever get a break, considering Future’s fans rival only the Beyhive in terms of sheer devotion. One thing’s for sure though: She’s definitely broken the internet by sharing this pic today.

Have you ever seen a totally out-there maternity pic? Tell us about it @BritandCo!

Kat Armstrong
Kat has been a writer, social media maven and mom for longer than she's willing to admit. She's also spent time in front of and behind the camera, interviewing celebs, politicians and acting as a producer for fashion and artistic photography shoots. When she isn't writing for various orgs and publications, she's hanging with her kids, husband and French Bulldog, Peter, in Toronto, Canada.
Celebrity Baby
Celebrity News
Celebrity Baby