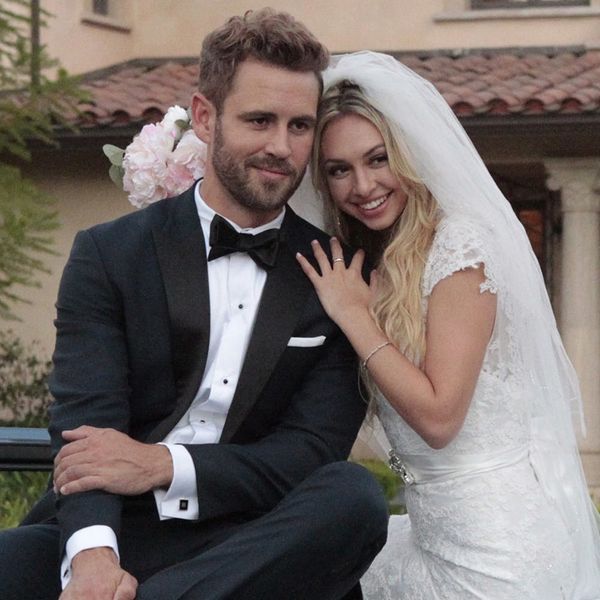 Season 22 of TheBachelor has certainly had its fair share of weirdness, what with the case of the mistakenly reported missing contestant, but it hasn’t exactly been the most exciting installment of the long-running reality show. Former contestant Corinne Olympios might be looking to stir up a little intrigue within the franchise, though, as she just posted a cutesy photo with former Bachelor leading man Nick Viall that has fans wondering what’s up.

The photo, posted on Monday afternoon, shows Olympios and Viall embracing in a hug as they both look at the camera, smiling. There was no caption, and no indication as to when the pic of the former season 21 costars was taken, but it certainly has commenters in a tizzy.

Reactions ranged from confused to excited and outraged. “Um ok WHAT,” one commenter wrote, expressing what everyone else seemed to be thinking. Variations on this sentiment ranged from “omg wut” to confused “ummm”s and “uhhh”s. Honestly, we get it.

“Now he knows who he really should’ve ended up with,”yet another user noted, alluding to Viall’s Bachelorengagement and eventual breakup with Vanessa Grimaldi.

Viall has most recently been linked to actress January Jones, and although neither has confirmed if they’re dating (or have even gone on a date!), we know there was some admitted previous mutual interest between the two.

Olympios, meanwhile, recently revealed that she got engaged IRL after Viall sent her home on TheBachelor, but the engagement ended a short time later. A quick look at Viall’s Instagram account shows that he hasn’t posted a similar picture of himself with Olympios, but that hasn’t stopped fans from flooding his comments asking about his love life.

Would you like to see Corinne and Nick together? Let us know @BritandCo!

Nicole Villeneuve
Nicole is an entertainment and lifestyle writer covering pop culture, news, and cool women doing cool things. She likes yard sales, MTV's Teen Mom, and putting too many memes in the group chat. She lives in Toronto.
the bachelor
Celebrity News
the bachelor