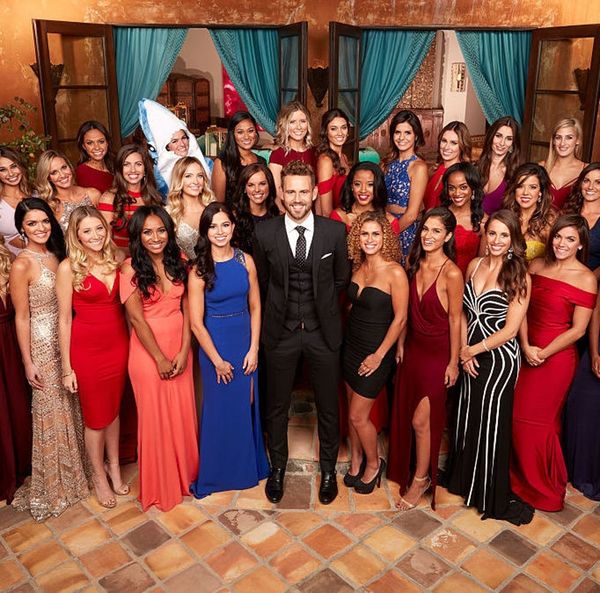 *Warning: This contains spoilers, because of course it does!*

Every season on The Bachelor, Chris Harrison promises us a finale “unlike any other.” This time, I think he’s right — I think this is a finale no one really cares about. There’ve been so many spoilers and potential spoilers this season (like the announcing of Rachel Lindsay as Bachelorette and Vanessa posting an Instagram from a bridal shop) that viewers are kind of over it (not to mention the fact that people are kind of over Nick in general). But, we still watch! So here’s what happened.

The first to meet with Nick’s family was Raven, who has actually already met Nick’s family before (on their first date!). Nick’s little sister Bella remembered Raven and liked her a lot, which was super cute. However, Raven then told Nick’s dad that she “preferred Nick didn’t say he loved her when she said it to him,” which was… strange, though he thought she was mature for it. Nick’s mom seems to still be having a hard time with his past attempts at love on television, and it makes me so worried about the family, to be honest. While I’m not his biggest fan, it’s obviously affecting the family that he keeps making these attempts, so I hope that somehow this works.

Then, Vanessa met with the family and the tone was a little different. For one thing, Vanessa is just a little more mature than Raven (and even than Nick), so it just felt a little more grown-up. She told Nick’s mom she was worried, however, and that she might not be ready to be engaged at the end of it even though Nick was the one she wanted to be with. Nick’s mom seemed shaken by that, even though it was a perfectly normal worry! She kept going, though, and expressed worries to Nick’s sister about uprooting her life, and the family kept telling her she needed to ask Nick these questions before time ran out.

When she talked to Nick’s dad, they both cried talking about love and selflessness, and it was a super surprising moment. She still didn’t say that she was ready to be engaged (again, normal!), and after she left the family was able to talk. They seemed nervous, and like they just wanted him to have a clear decision. His poor mom! She’s so obviously hurt by this process every time, I can’t imagine putting her through this if I were him. He assured them he had a lot of questions to ask himself before making the decision, and left presumably to do so.

The two met each other for their final date (Nick wearing… a fur peacoat?!) which began with a horseback ride into snow-covered woods. I don’t know if Nick’s brain was frozen, but he described the scenery as, “It’s literally wow.” They then met Santa at a cabin for some reason (was this filmed in December? who knows), and Vanessa cuddled with Santa in the cabin, which was absolutely bizarre. Santa asked them for their wishlists, and Nick said love, while Vanessa said, “ending up happy with the person that I love.” TBH, the cabin was kinda dark and creepy!

When they left the cabin, Nick reminded Vanessa of the basic premise of the show, which was that if their relationship felt better to him than the relationships with all the other women, she’d be the one he’d pick, and she ended up feeling like that didn’t sit right with her. Hmm… I mean, I get it, but that’s also basically what you signed up for. Her rationale was that she didn’t want to end up with someone just because their relationship slightly outshines other relationships, which is fair, but then why come on The Bachelor at all?

When Nick went over later that night, she still had questions for him. She called him out on only vaguely answering before, and he said it was because he was “careful with his heart” (though his track record says otherwise). When she asked if he felt like he was ready to propose, he said, “The week’s not over, and I have to use every moment to get there,” and she didn’t like that answer. She began crying, and there wasn’t much he could do to make her feel better — he couldn’t give her the answer she wanted, so they spent a little more time together before he had to leave.

Nick and Raven went ice skating on a frozen lake, which was actually a pretty cute callback to their date in Milwaukee. They seem to have a lot of fun together and were exceptionally good on the skates too! They then sat by the fire and chatted for a bit before Nick went into the woods and came back with two husky puppies for Raven to cuddle with. While the daytime part of their date was fun, they didn’t talk much about anything important — they kept it light, I guess, on purpose.

They reconvened at night for the last time they’d see each other before the final rose ceremony, and the focus at first was more on how stressed out Nick was than on their relationship and whether or not they have a future together. Raven is incredibly sweet, but she doesn’t always put her needs first, and she’s far too trusting — especially in this process.

Then Raven simply said she wanted to reassure him she had no hesitation and that she was ready and she loved him, basically saying she’d accept a proposal with no problem whatsoever. To me, this means Nick will probably propose to Vanessa, because he likes to make things hard for himself and I’m also not so sure he wants to be engaged in the first place. We’ll see!

BEFORE THE FINAL ROSE

Of course, Neil Lane came in to make his classic appearance on the show. Nick said, “Surprisingly, I don’t know much about engagement rings!” which was pretty funny. He also said that he was going to propose to “the woman he loves” later, so it sounds like maybe he has already made a decision he feels good about? Who knows.

Vanessa acknowledged, yet again, that the logistics of it might still not make sense for them — she loves her students, she loves her family, and may not be willing to relocate even though she does love Nick. Raven simply said she “wants to go to bed engaged.” Nick sat before a crackling fire holding an engagement ring, honestly looking conflicted enough that I wondered if he might chuck it in the fire before actually proposing with it.

Nick seemed conflicted up until the final moment, and was sad to let down the one he wasn’t going to pick. Then, Raven stepped out of the car, and we all knew. She really thought she was getting engaged, and she began her speech by asking him to hold her hand. His face kinda gave it away, but she still told him how she felt — I felt so bad for her. He didn’t tell her quickly enough, but she slowly began to get that he wasn’t picking her and it was really sad to watch. She started crying for what I think is maybe the first time this season, and actually comforted him through the breakup. Seriously, it was super hard to watch.

After letting Raven go, Nick admitted that he’s been fighting falling in love with Vanessa for a while now, but he didn’t necessarily seem happy about it, which was kind of odd. He was scared she was going to turn down his proposal, which is understandable given that it’s happened to him twice by now. She pulled up, and she was still unsure whether she wanted to be engaged or walk away alone, given the struggles of compromise she’s been facing this whole time.

Right when she walked in the room, he started telling her he had been falling in love with her for a while and that he was glad to be able to tell her. She started tearing up (as did he) and she started sharing her memories with him, and thanked him for taking another chance on love and for noticing her. Nick then got down on one knee and proposed, and Vanessa tearfully accepted. They walked outside to a horse-drawn sleigh, and Nick said, “Should we go start our life?” to which Vanessa replied, “Let’s go do it. Literally,” aaand that was it.

So, thoughts? Did you think Raven or Vanessa was the better choice for Nick? Do you think they’ll make it? Let us know over @BritandCo!

Rosemary Donahue
Freelance Editor at Brit + Co. Freelance writer everywhere. I like my dogs more than I like most people.
Dating
Pop Culture
Dating TV Recaps
More From Pop Culture