This Dad Turned His Kid’s Doodles Into Tattoos 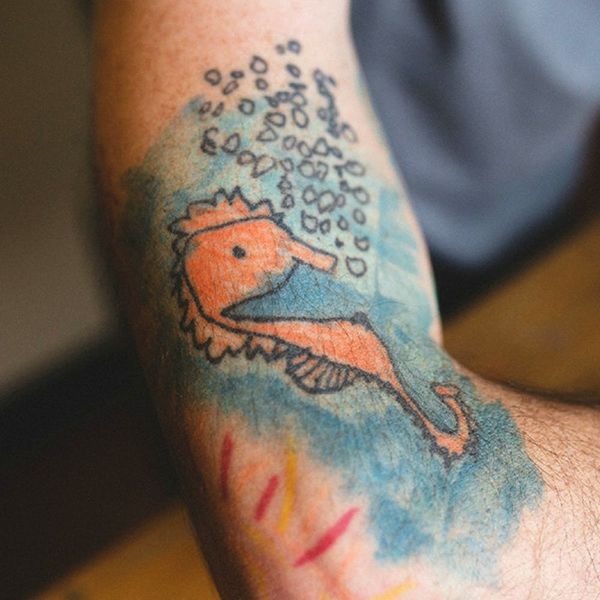 As we’ve proven before, kids’ drawings are worthy of so much more than just a spot on the fridge. From creating stuffed animals + nail art to teacher recreations, child art is having a moment. While all of that is impressive, one dad has taken the doodle conversion challenge a step further by inking himself. Yep, doodle tattoos are officially a thing.

Photographer Chance Faulkner recently photographed Keith Anderson of Peterborough, Ontario who has a series of tattoos (we’re not talkin’ temp tats) that are some of the most creative and personal we’ve ever seen. Keith takes his son’s drawings and turns them into ink on his arms. Dad, why didn’t you think of this?!

The tattooed father told Chance during their photo session that all the pieces on his right arm are of his 11-year-old son’s drawings throughout the years, from when he was 4 years old. He adds a doodle every year, making that seven times on the chair courtesy of his son. Guess it must not hurt too bad ;)

While all the pieces — from a house to a robot to a daisy — are masterpieces in their own right since they’re from his son, Keith’s favorite is the stained glass, as it was his son’s “own abstract idea.”

Over the years, Keith has had three different tattoo artists help bring his son’s doodles to his skin. One that’s definitely more memorable than the rest is his son, who has joined him at the tattoo parlor in the past and lended his penmanship skills to the inking process. Ummmm, #coolestdadever.

When Keith was asked what will happen if he ever ran out of space, he responded by saying, “I guess I’ll just get him to draw smaller pictures.” Touché.

Would you get your kid’s doodles tattooed on your skin? Let us know in the comments.