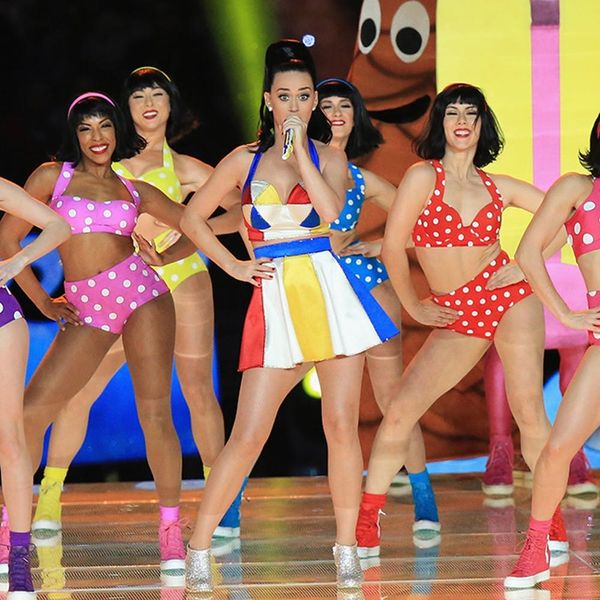 Even if you’re not a football fan, we’re guessing you probably at least caught a glimpse of Katy Perry’s legendary halftime show. From singing “Roar” atop a giant, golden lion to busting a move next to Missy Elliot, the pop singer totally killed it. And so, of course, a show of such epic proportions requires an epic memento. In celebration of knocking a milestone gig off her bucket list the celeb took to Instagram to share a new finger tattoo of this year’s Superbowl anniversary.

Showing up right alongside some Hello Kitty ink she received back in 2014, we’re going to guess that Katy’s fingers are possibly the most spirited of them all. But of course Katy isn’t the only celeb with stylish tats. Here are 10 of our favorite celebs showing off their trendy ink.

1. Sad Emoji Kitten: Always down for something a little wild, Miley went and got herself an emoji tattoo. At least when she does a sad pout, it will be super effective. (via @mileycyrus)

2. Prayer Hands/High Five: Keeping with the emoji theme, Drake hit up celeb tattoo artist, Dr. Woo, who took those prayer hands (which are actually a high five… FYI, y’all!) from a digital icon to a quirky inked masterpiece. (via @dr_woo_ssc)

3. World Map: Lily Allen has the world at her finger tips – well, actually at her wrist, but that’s close enough, right? (via @lilyallen)

4. For the Love of Bacon: Battling Miley for the most tattooed celeb title, model, Cara Delevingne has the words “bacon” spelled out along the sole of her foot. And we thought we really loved the stuff… (via @caradelevingne)

5. Dancing Ballerina: Rita Ora reportedly got this stunning ballerina tattoo after she and musician, Calvin Harris split. As far as breakup tattoos go, this one is kind of awesome. (via @ritaora)

6. Trumpt-tastic: Leave it to Lady Gaga to rock a trumpet tattoo like nobody’s business. (via @skwooty)

7. Album Art: Demi Lovato got this simple script tat in honor of her song “Warrior” from her self-titled album Demi. (via @ddlovato)

8. Tea Time: One Direction heartthrob, Louis Tomlinson showed off this sweet and simple tea cup tat a while back. As his caption Louis wrote, “You can’t go to bed,” which was no doubt a tribute to a line in the song “Little Things” which sings, “you can’t go to bed without a cup of tea.”(via @louist91)

10. Lion Fingers: The British model has so many epic tattoos we couldn’t feature just one. Aside from the bacon piece on her foot, this tiny lion on her finger might just be our second favorite. We’re thinking once Katy Perry gets a glimpse of this one she might be headed straight be to the parlor. (via Bang Bang Tattoo)

What’s your favorite celebrity tattoo? Let us know in the comments below!

Cortney Clift
Cortney is the senior writer and special projects editor at Brit + Co. She typically covers topics related to women's issues, politics, and lifestyle. When she's not buried behind her computer you'll find her exploring New York City or planning her next big adventure.
Tattoos
Celeb Style
Tattoos
More From Celeb Style