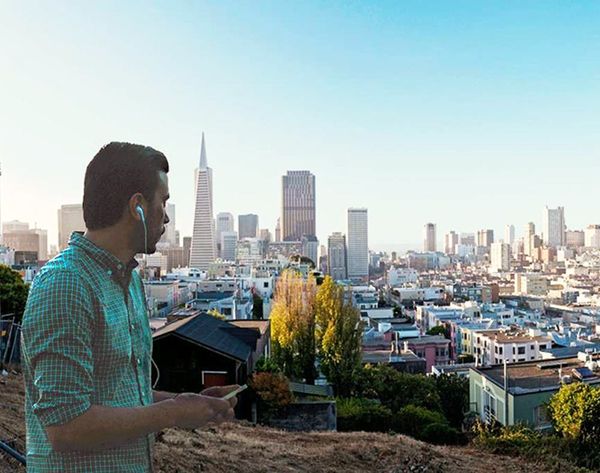 One of the founders of Groupon has turned his sights to changing how we explore. Andrew Mason wants to update, socialize and gamify the city walking tour. His new Detour mobile app brings GPS-based neighborhood walking tours to your iPhone earbuds and is launching this fall in the Bay Area, with more cities planned for next year.

Mason plans to sell curated audio tours to app owners for $5 to $10 a trek. And these are not your typical walking tour. The tours promise to take you past the tourist stalls, through alleyways and hidden doors, and into the secret gems that make a city special. Through your earbuds, you’ll hear real locals talking about history through relevant personal experiences. You also don’t have to worry about making a wrong turn and being totally confused about what the storyteller is talking about since the app is based on a location-aware platform. Factor in that you can take these tours on your own time without 20 other out-of-town tourists, and we’re ready to start downloading adventures RIGHT NOW.

Oh, and then it just goes on to get better. There’s room for users to creatively narrate a tour of their favorite haunts, whether Fisherman’s Wharf or a locale far less laden with ice cream-licking tourists. Users can contribute their own tours and then take a cut of the proceeds.

Mason’s detour from Groupon to audio tours (sorry!) is not completely nonsensical. Both Detour and Groupon focus on the local, and both have social aspects. Detours can be shared and synced up among groups. And while Groupon has lost gobs of money and prestige since first opening its Chicago doors in 2008, Detour could be Mason’s Silicon Valley comeback; the touring industry is worth tens of billions of dollars, after all.

If watching Detour’s video doesn’t convince you to try it out, both in your hometown and the next time you’re exploring a new city, we’ll just assume curiosity is not going to kill the cat inside of you any time soon.

Where would you take Detour in your city? What city would you like to use it to explore in? Let us know in the comments below!

From Your Site Articles
Barry Eitel
Often blinded by science, Barry is a Bay Area-based journalist and playwright, focused on tech innovation and the business of Silicon Valley.
Tech