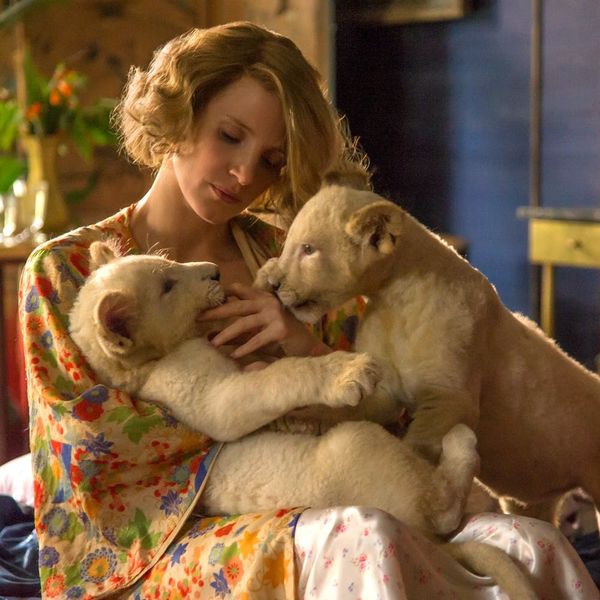 Every March, we have the opportunity to celebrate the amazing contributions of women through the ages thanks to Women’s History Month. Perfectly timed for this year’s observance is the March 31 release of The Zookeeper’s Wife. Starring Jessica Chastain, Johan Heldenbergh, and Daniel Brühl, the film tells the story of Antonina Żabińska (Chastain), who works with her husband to rescue Jews from the Warsaw Ghetto and shelter them in the ruins of her once-beautiful zoo during World War II.

Based on Diane Ackerman’s 2007 book of the same title, The Zookeeper’s Wife is an intense and beautiful (and true!) account of one woman’s resourcefulness and strength during an impossibly frightening period of history. We had a chance to talk with Ackerman about the importance of Antonina’s story, female empowerment, and quiet acts of bravery. Keep reading to learn more.

Brit + Co: With the recent success of movies like Hidden Figures, female-leading films are finally getting the recognition they deserve. Do you think the tide is turning in Hollywood to tell more of these lesser-known, women-driven stories?

Diane Ackerman: Yes, I do. History is also Herstory, and authors and filmmakers alike are discovering the compelling lives of unknown women scientists, explorers, inventors, and wartime heroines who achieved great things — but whose stories have fallen between the seams of history.

B+C: How do you think The Zookeeper’s Wife resonates now compared to 10 years ago when it was published?

DA: It continues to resonate with readers in much the same way today. The time and country may vary, but the human saga remains the same. Women face many of the same forces and moral questions today that Antonina faced during World War II. I don’t think one can read the book without wondering — as I often do — Would I have taken those risks? Would I have found her courage?

B+C: The production team for this film skewed heavily female. How do you think that impacted the way the story was imagined on screen? What were the challenges and benefits?

DA: The film is sumptuous to watch and exquisite in its sensory detail, which allows viewers to be immersed in the era. The story is rich with moral courage, love, and compassionate daring, with the title role of Antonina played multi-dimensionally as a forceful and determined woman who is intelligent and clever, deeply empathetic, fearful yet brave, sensitive, uncertain, stubborn, generous, insightful, and feminine — among so many other qualities that come through in Jessica Chastain’s inspired portrayal of her. Real women contain multitudes, and when they’re surrounded by the unthinkable horrors of war, they’re tested in unique ways that draw upon their native gifts and strength of character, as many women have discovered throughout history and continue to discover today. The women involved with the film have reached deep into themselves to find an indomitable kinship that transcends culture or era. We all can identify with and admire Antonina. Her husband Jan was heroic in more traditional, violent ways, but Antonina’s heroism was different. She was also risking her life every day, and she was determined that the people hiding with her survive the war with their humanity intact.

B+C: With March being Women’s History Month, what lessons from The Zookeeper’s Wife do you think help celebrate and empower women?

DA: One of the biggest lessons for me is what so-called “ordinary people” rise to in every era. You don’t need to be larger than life. If you open your heart to compassion and empathy, you can discover strength and purpose you didn’t know you had. We reap what we sow, especially when it comes to love, kindness, and compassion. On the periodic table of the heart, the love we receive weighs the same as the love we give. Deep beauty comes from inner strength and conviction. Women’s stories transcend time and place, tie us together, and inspire us to grow, explore, and be bold for changes in our own lives.

The Zookeeper’s Wife hits theaters on March 31. Check out the trailer for a sneak peek of amazing animals and the even more amazing acts of Antonina’s wartime bravery.

Alli Hoff Kosik
Alli Hoff Kosik is a freelance writer who is passionate about reading, running, rainbow sprinkles, her lipstick collection, watching embarrassing reality TV, and drinking pink wine. She lives in Brooklyn with her husband and (in her dreams, at least) three golden retriever puppies. Listen to her talk books on The SSR Podcast.
interview
Movies
interview
More From Movies