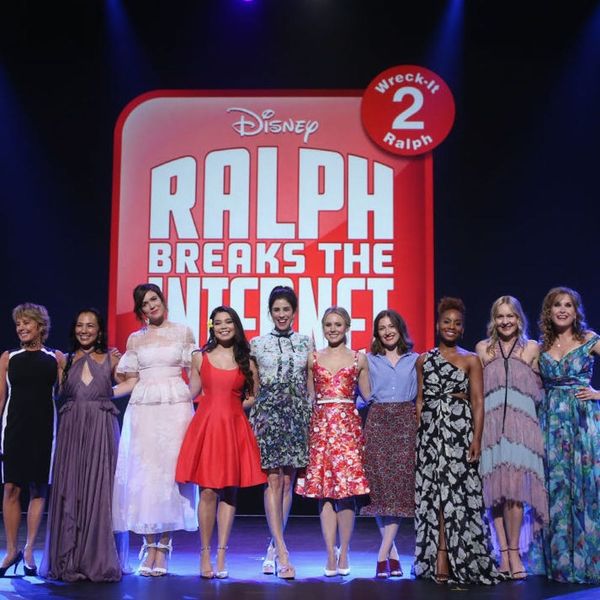 Over the weekend, Anaheim, California was besieged by unapologetic Disney fanatics, uber-detailed cosplayers, and oodles of HUGE celebrities (like Oprah and Reese Witherspoon HUGE). But they weren’t flocking to Disneyland or California Adventure. No, they were camped out (in some cases, literally camped out) at D23 (the biennial Disney fan conference) to get the scoop on things to come in the Disney universe. Some of the most anticipated news (the “let’s sleep on concrete overnight”-worthy news) came via the jam-packed presentations from Pixar and Walt Disney Animation, as well as Walt Disney’s live-action arm. Thankfully, those long hours waiting in line, the mad rush for seats, and all the giddy anticipation were totally worth it; Disney has some amazing feature films coming out in the next couple of years, including these 11 gems.

John Boyega, Daisy Ridley, and director Rian Johnson (pictured above) hung out on stage with costars Mark Hamill and Gwendoline Christie, as well as newcomers to the Star Wars franchise, Kelly Marie Tran, Laura Dern, and Benicio Del Toro. The crew shared a brand-new behind-the-scenes look at the MUCH anticipated follow up to TheForce Awakens. They didn’t give much away (and also didn’t say much about the upcoming Han Solo spin-off), but we won’t have to wait too long, since the film comes out this December. (Photo via Jesse Grant/Getty Images for Disney)

There is a whole lotta girl power in the upcoming adaptation of the classic Madeleine L’Engle novel. Sharing the first trailer were director Ava DuVernay, Storm Reid, Reese Witherspoon, Mindy Kaling, and Oprah Winfrey — yes, THAT Oprah Winfrey — as Mrs. Whatsit, Mrs. Who, and Mrs. Which. Chris Pine was there too, but was totally overshadowed by these awesome ladies. (Photo via Alberto E. Rodriguez/Getty Images for Disney)

Dumbo is about to get way darker, as Tim Burton will be creating his own slightly twisted take on the Walt Disney 1941 classic animated film. Colin Farrell, Danny DeVito, Eva Green, and Michael Keaton star in the upcoming live-action flick, alongside a huge puppet that will stand in for the big-eared elephant. “We’re trying to give it the same heart, feeling, and emotion that we all loved about the original,” Burton said. (Photo via Walt Disney Studios)

It’s been a while since someone has tackled the holiday classic, but Disney is giving it a glorious go with The Nutcracker and the Four Realms. The cast is a mix of those who dance for a living (Misty Copeland and Lil Buck as the Mouse King), along with those who don’t. The Sugar Plum Fairy is played by Keira Knightley, Mother Ginger will be played by Helen Mirren, and Drosselmeyer will be played by Morgan Freeman. (Photo via Walt Disney Studios)

Get ready to cry. TheLion King — in a new realistic style — is coming back thanks to Jon Favreau (who also did the realistic-looking The Jungle Book). Donald Glover, James Earl Jones, Seth Rogen, and John Oliver star in this epic film. The clip they showed of Rafiki holding up a baby Simba to the strains of “Circle of Life” is legitimately jaw-dropping. (Photo via Jesse Grant/Getty Images for Disney)

If you like Marvel and find yourself crushing on super heroes, D23 was THE place to be. Robert Downey Jr., Josh Brolin, Tom Holland, Benedict Cumberbatch, Chadwick Boseman, Chris Hemsworth, Mark Ruffalo, Paul Bettany, Elizabeth Olsen, Pom Klementieff, Karen Gillan, Dave Bautista, Don Cheadle, Sebastian Stan, and Anthony Mackie hit the stag — yes, all at the SAME TIME — to promote the next Avengers film. The movie features the likes of Spiderman, Dr. Strange, Thor, Iron Man, the Guardians of the Galaxy, and more joining together to fight the super-evil Thanos. (Photo via Jesse Grant/Getty Images for Disney)

Olaf’s Frozen Adventure: This fall, all our hearts will thaw with the debut of the short Olaf’s Frozen Adventure, which will run before Pixar’s Coco. Josh Gad sang the way-too-catchy new song “That Time of Year” live onstage alongside Kristen Bell. Olaf and Anna didn’t spill the beans as to what’s coming in the follow-up to that little film called Frozen, but we do know two things: that the original cast is coming back, and that it will come out on November 27, 2019. (Photo via Walt Disney Studios)

OMG. The new Wreck-It Ralph looks GREAT. Ralph and Vanellope are back, but this time they journey to the world wide web (with hilarious results). The movie will feature every animated Disney princess, including Sarah Silverman’s Vanellope. At the presentation, Silverman was joined onstage by the actresses who voiced Belle, Ariel, Moana, Merida, Jasmine, Pocohontas, Tiana, Anna, and Rapunzel. The other news is that Yesss (a trendsetting algorithm) is voiced by Taraji P. Henson. YESSS indeed. (Photo via Jesse Grant/Getty Images for Disney)

Fashion luminaries including Zac Posen, Nina Garcia, Rachel Zoe, and Kendall Jenner paid homage to Edna, the black-bobbed costume designer, in a teaser video for Pixar’s Incredibles 2. The stylish follow-up, directed by Brad Bird, will focus more on Elastagirl this time and features hilarity like Jack Jack getting into a no-holds-barred fight with a racoon. (Photo via Walt Disney Studios)

We won’t have to wait long to see Pixar’s tribute to Dia de los Muertos; it hits theaters on November 22, 2017. To celebrate the upcoming premiere, Anthony Gonzalez (the voice of the main character) and Benjamin Bratt (the voice of the music legend Ernesto de la Cruz) sang “Remember Me” by Kristen Anderson-Lopez and Robert Lopez (of Frozen fame) with over a hundred traditionally dressed dancers taking over the aisles and the stage. (Photo via Walt Disney Studios)
Sunny Chanel
Sunny Chanel is a freelance writer as well as the founder of the whimsical site Wonder and Company. When this proud San Franciscan isn't writing, working on her fixer-upper or doing crafts, she is playing dress up with daughter and planning her next trip to Disneyland.
Disney
Movies
Disney