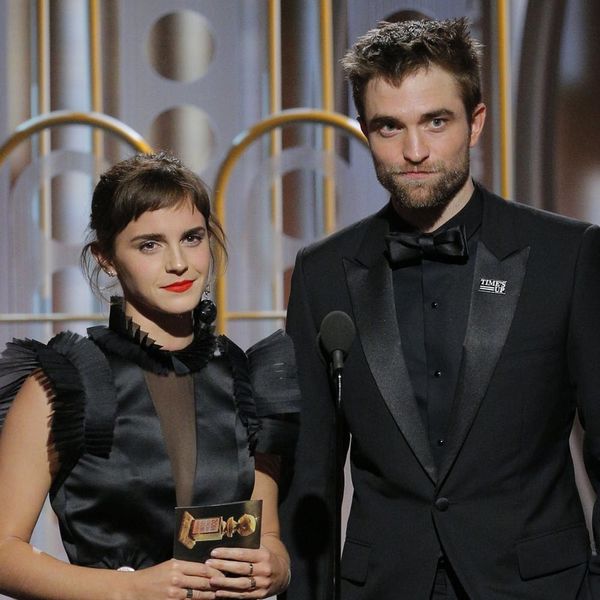 The 2018 Golden Globes had no shortage of A-list presenters at Sunday’s show, but one pairing in particular caused quite a bit of commotion on social media. Emma Watson and Robert Pattinson had a surprise Harry Potter reunion as they appeared together to present an award, and fans could not handle the excitement.

The actors, who played Hermione Granger and Cedric Diggory in the franchise, were on hand to present the Best Limited Series or TV Movie award. Standing side by side — both in all black in support of the Time’s Up movement — they transported fans back to 2005, when they starred opposite each other in Harry Potter and the Goblet of Fire.

GoF was the only film in the franchise that featured Pattinson’s Cedric (RIP), while Watson of course went on to appear in all eight movies based on the JK Rowling book series.

It’s been over a decade since the stars appeared on the big screen together, and fans could not handle the sight of them together again, taking to social media to scream in excitement.

I'M SORRY BUT TO INTRODUCE EMMA WATSON AND ROBERT PATTINSON AS ANYTHING OTHER THAN HERMIONE GRANGER AND CEDRIC DIGGORY IS ABSOLUTELY DISRESPECTFUL!!! #GoldenGlobes

I’m still shook that Hermione Granger and Cedric Diggory got to present an award together. #GoldenGlobes

One eagle-eyed fan even pointed out that it wasn’t just Watson and Pattinson filling out the HP universe at the Globes.

“The Harry Potter nerd in me wants to point out that Sirius, Lupin, Hermione, and Cedric are all at the #GoldenGlobes. Did I miss anyone else?” she tweeted, referring to the fact that Gary Oldman and David Thewlis were also in attendance. (Oldman won Best Actor in a Drama Motion Picture for Darkest Hour, while Thewlis was nominated for his role in Fargo.)

Another fan took particular pride in the pair’s attire, tweeting, “A Hermione Granger and Cedric Diggory reunion, AND they’re supporting#TIMESUP??? We stan legends.” We’re sure the rest of the fandom would agree.

Were you excited to see Hermione and Cedric together at the Golden Globes? Let us know @BritandCo!