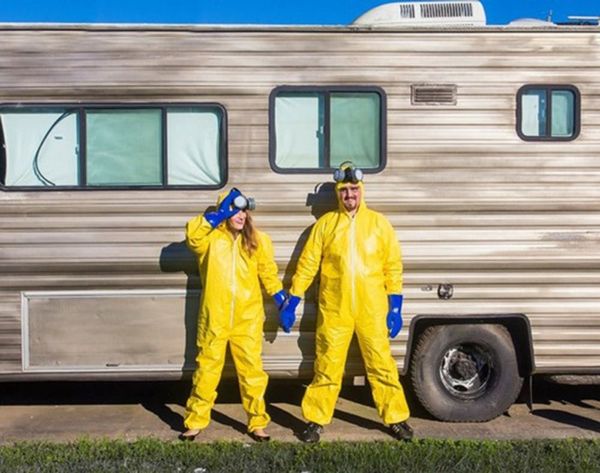 Tonight’s the night! The night we find out which of television’s A-listers will be taking home coveted Emmy awards… and, most importantly, the night we find out what they’re all wearing. Speaking of, we thought we’d help you get a head start on your Halloween costumes with 11 of our favorites, inspired by this year’s Emmy nominees. It’s never too early, guys.

1. Breaking Bad: This couple actually dressed up like this for their engagement shoot… because nothing says romance like fake meth. (via Mashable)

2. Game of Thrones: There are pleeeeeenty of ways to honor your favorite GoT characters, but not many of them will be as awesome as this rendition of the mother of dragons — complete with THE CUTEST DRAGON. Find all those Khaleesi-approved braid tutorials here, too! (via Izismile)

…or back to basic black. (via FabSugar)

4. House of Cards: Anyone else scared out of their wits by this baby? This kid’s parents dressed him up like Frank Underwood and everyone in the world collectively shivered. (via Babble)

5. Mad Men: Nope, we’re not tired of Mad Men costumes yet. Not one bit! You’ll feel the same after you’ve perused this awesome gallery from a Mad Men theme party — and taken a peek at our Mad Men beauty tutorials to help you nail the look. (via Vita.mn)

6. True Detective: The symbolic murder-antlers might be a little much, so how about you go as BFFs for life, Rust and Marty? (via The Good Camp)

7. Orange Is The New Black: The chicken, LOL. Update the look this year with some gardening supplies and Pensatucky’s new teeth. (via Popsugar)

8. Portlandia: Portlandia is flush with couples costume possibilities. If you’re a trio, we suggest dressing up as Candace and Toni, the owners of feminist bookstore Women + Women First (above) — then adding their hero, tennis legend Maria Navratilova, to complete the set. (via Movement + Action)

9. Parks + Recreation: There are so many ways to go with a Parks + Rec costume, especially if you have a group. This couple made us LOL a little bit with their get-up — Ron Swanson and “all the bacon and eggs you have.” Runner up? Cones of Dunshire. (via Nikki Mason)

10. Brooklyn Nine-Nine: Police uniforms are easy to find, but don’t forget that nobody does a date night look quite like Jake and Amy. (Except you, this Halloween.)

11. Veep: Wanna be Vice President Selina Meyer? Take a cue from… Kevin Spacey? He and Julia Louis-Dreyfus just swapped Entertainment covers earlier this month. We’ll be using this as inspo for us and our SO, thanks very much. (via Zap2it)

Any other ideas we missed? Let us know what you’re gonna be in the comments!