Facebook Is Making Some Awesome Changes to Their Emoji 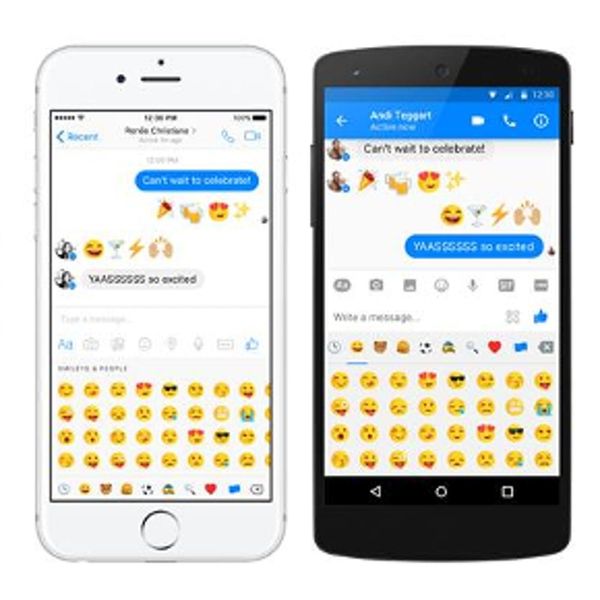 Today is an emoji adoration overload, first with the announcement that a whopping 72 amazing new emoji are on the way, then with the release of new Kimoji. Now, news is buzzing that Facebook has made a major update to their own Messenger emoji that takes them WAY ahead of the pack when it comes to some much needed representation and diversity.

In a post released on Facebook, we’re asked to “Say Hello to the New Messenger Emojis — from skin tones that you can choose to lots of women in great roles, Messenger is beginning to make emojis more representative of the world we live in.”

The collection includes standardized emoji that will match your bestie’s phone (so there’s no misunderstanding when it comes to mixed messages), so that when you’re sending a smiley face, they’ll see the same face on the other end.

Also addressing the call for more lady-like pics (ya know, kick-butt and totally diverse ones), the new Messenger emoji include a female police officer, gal runner and pedestrian, as well as a woman surfer and swimmer. We’ve also been assured that these are just the first, and more female-fronting pics will continue to be added.

But that’s not where the diversity ends. If you’re cool with the bright yellow faces smiling back at you from Messenger, then you can go about your day with those sunny circles. If you’d rather change ‘em up to something that is a little closer to your own gorgeous self, then Messenger now offers a variety of skin tones that you can choose from.

Also offering an “emoji picker” to make sure you’re making the most of the teeny pics, this is definitely an update that you’ll want to check out ASAP, FB friends. The first batch of new releases comes out tomorrow.

What do you think about these FB Messenger changes? Tweet us @BritandCo!

Desiree O
Desirée O is a ‘Professional Bohemian’ who loves anything and everything related to the arts, entertainment, and pop culture. She ADORES being a ‘Newsy’ for Brit + Co, covering all of the latest tidbits of awesomeness that you want to read about. When she’s not writing, she’s either making messy art, going on long adventurous walks with her camera, or poking around over at bohemianizm (http://www.bohemianizm.com/). You can find out about Desirée O and her work at http://DesireeO.com/ or follow her on Twitter @DesireeO.
Emoji
Most Recent
Emoji Facebook