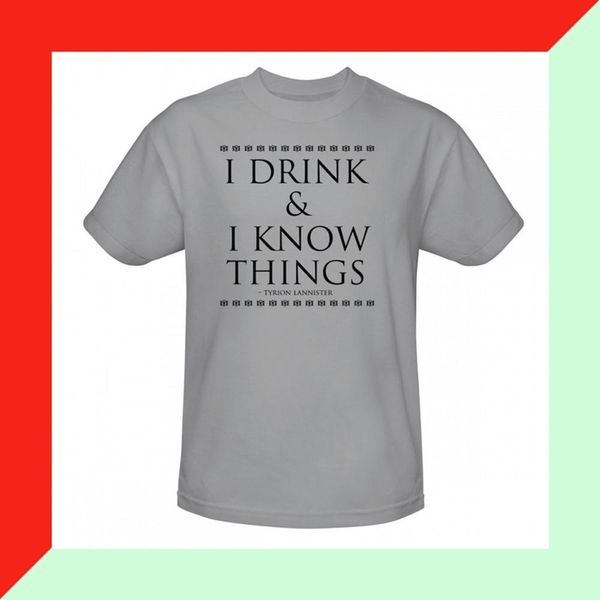 There’s nothing quite like the sting of losing your favorite TV show — even if it is only the end of a season. This year, Game of Thrones kept us at the edge of our seats with wins (we’re looking at you, Stark family), losses and some super heartbreaking deaths. While the close of season six gave audiences and longtime GoT junkies the satisfaction we’d been hoping for (if you haven’t caught up on this season yet, now is the time!), there’s no question that the passing of this last episode has left fans with a MAJOR void. So how do we cope? Shopping (duh!). Whether you’re a recovering fan or you’ve got a friend in dire need of some serious cheer, we’ve got the gifts that are sure to lift up your weary souls until GoT‘s next great season. From cuddly toys to beer mugs that’ll have you drinking like a Lord of Westeros, these 16 GoT gifts are sure to lift your end-of-season spirits.

1. HBO Shop Game of Thrones Monopoly ($60): Are you a pragmatic Daenerys or power-hungry Cersei? Test your strengths with this fun GoT Monopoly set — and don’t be afraid to get a little brutal when fighting for your place on the iron throne.

2. Skin and Grain Game of Thrones House of Stark Watch ($40): This watch set reps a bond deeper than friendship. Give your groomsmen the *perf* big day accessory with these personalized Stark watches that show off your proud wolf-pack mentality.

3. Ben’s Mind Game of Thrones Westeros Map ($20): Give your friend the gift of Westeros… well, at least a map of it anyway. Your GoT-obsessed pal can now decorate their new pad with a colorful wall hanging of this turbulent piece of land.

4. HBO Shop Game of Thrones I Drink & I Know Things Shirt ($25): Tyrion’s no-BS attitude has gotten him far these past six seasons. He said it best when he laid this badass quote in Mereen. You can now rock that same mantra with your very own tee.

5. A Song of Fire and Ice Book Set by George R.R. Martin ($45): Take things back to basics. While the end of season six has left us with an unquenchable thirst for more Game of Thrones storylines, let’s not forget that, before there was a show, there was an epic book series. This summer, start a book club with your pals and catch up on all the GoT moments that didn’t make the small screen.

6. Fencing n’ Archery Westeros Transit System Poster ($12): Now here’s a Game of Thrones gift with a modern twist. You can send it to your bestie who’s moving to the big city. They’ll love how it brings GoT into the 21st Century.

7. Game of Thrones Vinyl POP Figures ($10): You can celebrate your BFF’s new job with this sweet little desk mate. Whether they’re a Jon Snow fan or worship the Khaleesi, these office accessories are sure to bring a smile to their face, even on the toughest work days.

8. Hodor Door Wedge ($7): The heartbreaking loss of Hodor will stick with us forever. Instead of having to yell that sad phrase “Hold the door!” you can just put a wedge in there to avoid any further grief.

9. HBO Shop Game of Thrones Drogon Dragon Plush ($30): This gift is great for your girl who is a new mom-to-be. Celebrate her baby news in a whimsical way with a cute dragon that reps everyone’s fictional #momgoals. This plush Drogon tells her that she’ll be as fierce as the mother of dragons.

10. Attic Bazaar Game of Thrones Style Silver Drinking Goblets ($21, set of 6): Still obsessing over those fancy AF cups everyone in King’s Landing are always drinking out of? Us too. Pick up a set for yourself and give your bougie best friend the ultimate wine glass set.

11. Game of Thrones Dart Board Set ($127): You’ve tried to move on, but there’s just no use. No other show compares to the passion you had for Game of Thrones. Pass the time ’til season seven rolls around by playing a game of darts that reminds you that new episodes are coming.

12. Bed Bath and Beyond Game of Thrones House of Lannister Beer Stein ($50): Cheers to another great season. For your pal who likes the family everyone loves to hate, commemorate their steadfast Lannister pride with this strong and colorful beer stein. Then buy yourself a Stark mug while you’re at it ;)

13. HBO Shop Game of Thrones Ghost Direwolf Plush ($30): Fans who NEVER stopped believing that Jon Snow was alive deserve a prize. With this adorable Ghost plushie, you can enjoy a good night’s rest after an entire season of being right.

14. Wood Lab Moldova Game of Thrones Wood Cutting Board ($14): Dinner is coming! Got that friend who’s already prepping for her season seven viewing party? Show her you support her hostess-with-the-mostess ways with this clever Winterfell-inspired cutting board.

15. Sarina Craft Supplies Game of Thrones House Stark Seal ($10): You’re always down to show off your Stark family love. Embellish your mail the old-fashioned way with this House of Stark wax seal set, featuring a direwolf, of course!

16. Dark Horse Deluxe Game of Thrones Pint Glass Set ($20): Just because your friends are married doesn’t mean they have to belong to the same GoT house. Give your recently wed friends this mix-and-match set of family pint glasses as a symbol of their opposites-attract relationship.

17. Lorinas Game of Thrones Nine Banner Bundle ($180): For you and your besties, Game of Thrones isn’t just a show, it’s a way of life. Show off your squad’s die-hard love for this long-running show with a Westeros family banner in each of your homes.

How are you coping with the end of Game of Thrones? Follow us on Pinterest for more fun gift guide inspo.

Wendelle Co
Wendelle is a Brit + Co contributor and a notorious pop culture and film junkie (with a passion for everything '90s). When she’s not writing, you can find this San Francisco native brunching with her bestie or working at a wedding or two. You can follow her latest escapades on her Instagram @WheresWendelle
Game of Thrones
Pop Culture
Game of Thrones Gift Ideas
More From Pop Culture