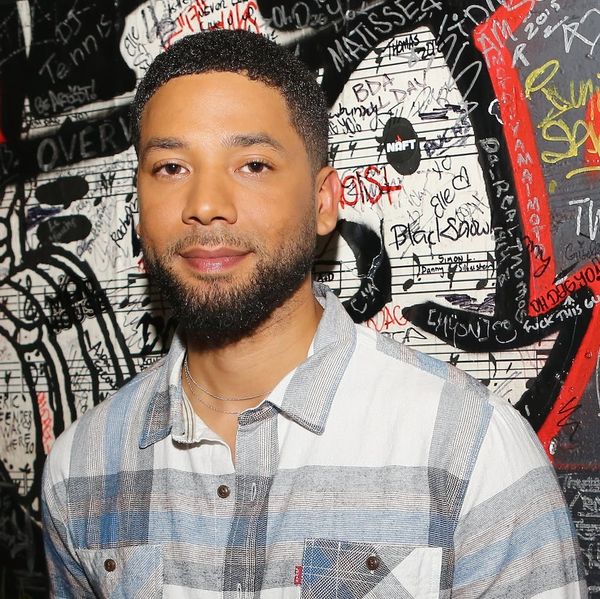 “Detectives are currently presenting evidence before a Cook County Grand Jury,” CPD spokesman Anthony Guglielmi tweeted around 4:15pm CST. A few hours later on Wednesday evening, The Hollywood Reporter reported that the actor is being charged with felony disorderly conduct by the Cook County state’s attorney.

It’s been several weeks since Smollett filed a police report for an alleged hate crime in Chicago. According to the actor, he was attacked late at night on January 29 by two men shouting racial and homophobic slurs. He said he suffered bruises and cuts to his head, neck, and face, and that one of the alleged offenders tied a rope around his neck. CPD stated at the time that they were investigating the attack as a potential hate crime.

But as details of the investigation continued to emerge, a growing number of observers began to question the veracity of Smollett’s story. Those doubts came to a head with the development labeling Smollett a suspect on Wednesday.

If it turns out that part (or all) of Smollett’s story was fabricated, he could face jail time and the end of his career, which raises questions about what may have happened, and why. Here’s everything we know about the saga.

January 22, 2019: A racist, threatening note arrived at the Empire set addressed to Smollett.

According to reports, the note used letters clipped from magazines.

January 29, 2019: Smollett was allegedly attacked around 2am near his Chicago apartment.

TMZ reported that the attackers called him “that f**got Empire n*****” and yelled, “This is MAGA country.” Smollett filed a police report and checked himself into a hospital later that day with scrapes and bruises.

January 30, 2019: Chicago police announced that they had identified two persons of interest in the case.

Police also confirmed that there was no surveillance footage of the attack.

“We want to be clear, this was a racial and homophobic hate crime,” read a statement on behalf of the family, which includes sister Jurnee Smollett-Bell of Friday Night Lights and Full House fame. “Jussie has told the police everything from the very beginning. His story has never changed, and we are hopeful they will find these men and bring them to justice.”

February 1, 2019: Smollett broke his silence in a short statement released to Essence magazine.

“My body is strong but my soul is stronger,” read the statement. “More importantly I want to say thank you. The outpouring of love and support from my village has meant more than I will ever be able to truly put into words.”

At a sold-out nightclub show in Hollywood, Smollett took to the stage and thanked fans for their support.

February 13, 2019: Two men were arrested in connection with the alleged attack. One was a former Empire extra.

Former Empire extra Olabinjo Osundairo and his brother, Abimbola Osundairo, were arrested (but not charged) by CPD. Among the items reportedly seized from their home were a magazine, stamps, a black face mask, an Empire script, a phone, receipts, a red hat, and bleach.

In an emotional interview, he thanked fans for support and imparted a message of encouragement to young LGBTQ+ and Black viewers. “We live in a society where, as a gay man, you are considered somehow to be weak. And I am not weak,” he told Robin Roberts through tears.

Smollett also addressed the mounting hoax rumors swirling around the alleged attack: “It feels like if I had said it was a Muslim, or a Mexican, or someone black, I feel like the doubters would’ve supported me a lot more, and that says a lot about the place that we are in our country right now.”

Meanwhile, CPD spokesperson Anthony Guglielmi pointed out that the Osundario brothers were of interest because of their proximity to the attack, and that Chicago police were continuing to investigate. The brothers were released within 24 hours.

CNN cited two unnamed sources claiming that police believed Smollett paid two men to orchestrate the attack. Though the reports were not confirmed by police, CPD didn’t totally discredit the information, either. Although Guglielmi had previously tweeted that initial reports to that effect were “unconfirmed” and that police had “no evidence” to support such claims, the department indicated on February 16 that the investigation had changed course.”

“We can confirm that the information received from the individuals questioned by police earlier in the Empire case has in fact shifted the trajectory of the investigation,” CPD said in a statement. “We’ve reached out to the Empire cast member’s attorney to request a follow-up interview.”

To regain control of the narrative, Smollett’s attorneys released a statement that spoke to the actor’s anger at suggestions that he may have made his story up. “As a victim of a hate crime who has cooperated with the police investigation, Jussie Smollett is angered and devastated by recent reports that the perpetrators are individuals he is familiar with,” it read in part.

The presidential contenders independently announced that they would reserve judgment on the case after initially supporting Smollett. The same day, attorneys for the actor released a statement that said there were no plans for Smollett to meet with police for a follow-up interview and that his legal team would continue to communicate with CPD on Smollett’s behalf.

Deadline reported that upcoming episodes of the Fox drama were being rewritten to cut Smollett from production due to increased scrutiny surrounding the attack.

With the Osundario brothers set to appear in court, Smollett’s attorneys called prosecutors at the 11th hour to halt court proceedings with a promise of new evidence. Though the proceeding was successfully postponed, the lawyers’ effort may have backfired; within hours, CPD named Smollett as a suspect.

The network doubled back on its February 20 statement and announced in a statement that Smollett’s character would be written out of the last two episodes of the current season of Empire in order to avoid “further disruption” on the production.

We will continue to update this story as it unfolds.

Kat Armstrong
Kat has been a writer, social media maven and mom for longer than she's willing to admit. She's also spent time in front of and behind the camera, interviewing celebs, politicians and acting as a producer for fashion and artistic photography shoots. When she isn't writing for various orgs and publications, she's hanging with her kids, husband and French Bulldog, Peter, in Toronto, Canada.
Celebrities
Current Events
Celebrities Controversy
More From Current Events