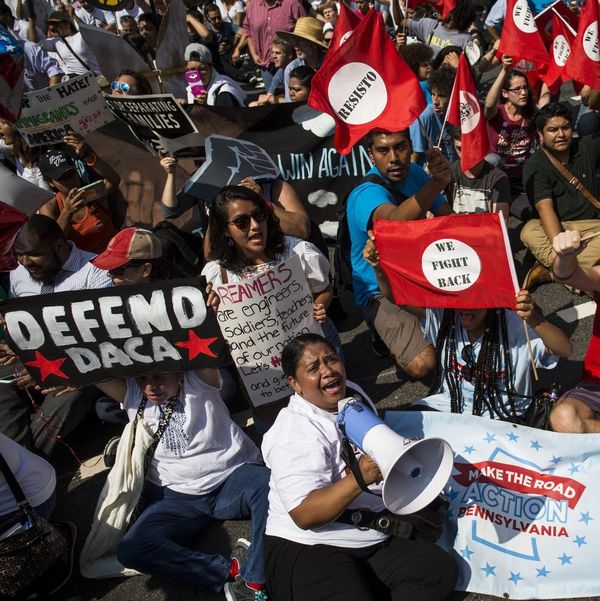 With confirmation yesterday of President Trump’s plan to repeal the Obama era DACA program that protects some 800,000 young immigrants from deportation, people across the country are worried about what will happen next — and finding ways to fight back and defend DACA.

DACA gave many the opportunity to thrive in the US, and with the potential loss of nearly $460 billion in tax dollars over the next 10 years thanks to DACA recipients (called “Dreamers“) who were legally contributing to the US economy, a majority of Americans — over 64 percent, by some estimates — are unhappy with the news.

While it remains unclear if Dreamers will be safe under any new proposals brought forth by the GOP, there are ways to fight back against the repeal announcement, even if you missed some of the impromptu protests that happened throughout the country yesterday.

In case you are wondering what #FifthAve looks like right now. This is after arrests of protesters staging a sit-in @ Trump Twr #DACAprotest pic.twitter.com/6Y7QfwC7rH

If you do have the ability to head out and support upcoming protests, the website Here to Stay has an interactive map of all the upcoming events in your city and state. With new protests being planned throughout the month of September, this is an easy way to get involved with on-the-ground protest.

If you can’t make it out to a public protest, pick up the phone and call your member of congress, or take pen to paper and write a letter. While this act may seem insignificant, it can have a major impact. The New Yorker reported earlier this year that while phone calls can have a quicker effect, bombarding your congressperson with correspondence in any fashion is important to help get word to them that you’re unhappy and enact change.

Don’t have time to call? There’s a bot for that. Resistbot is an online tool that helps you figure out exactly who to contact and how to do it. Just text RESIST to 50409, and the bot will find who represents you in Congress and message them on your behalf.

If you’ve phoned, emailed, handwritten a note, and have some cash to spare, there are a number of legal charities that could use your help in protecting Dreamers and their families right now.

The ACLU supports immigrants and refugees by protecting their human rights and rights in the country.

The National Immigrant Law Center helps provide legal aid to newcomers while fighting against legislation like the DACA repeal.

Immigration Equality supports LGBTQ+ folks trying to immigrate to the US and is working to support queer folks affected by the DACA repeal.

Families for Freedom is a New York-based organization that helps support families in the face of deportation.

The Immigrant Defence Project is a group of legal experts that advocate for and fight against unfair treatment and government abuse of immigrants.

Make the Road New Jersey fights for Latinx immigrants and other working class folks in NJ (and NY).

United We Dream is a youth-run immigration initiative that helps support Dreamers.

How are you getting involved to fight the DACA repeal? Tell us @BritandCo!