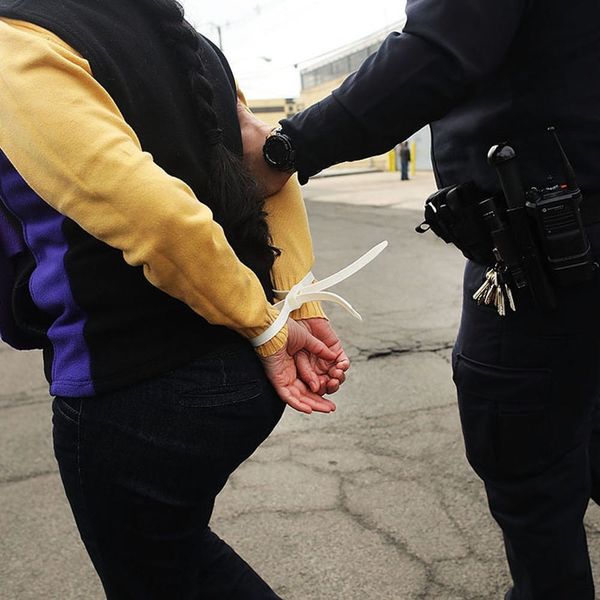 On February 15, 22-year-old Daniela Vargas’s father and brother were both arrested by ICE agents outside their home in Mississippi. She was sleeping and awoke to find both members of her family in handcuffs. According to The Clarion-Ledger, Vargas locked herself in her closet. Five hours later, ICE agents returned to her home and broke down her door. Vargas was handcuffed while the agents searched her home but was initially released; her father and brother, meanwhile, have remained detained and face deportation.

On Wednesday, Vargas held a press conference addressing the actions taken against her family by immigration officers. Promptly after that press conference, Vargas was pulled over and also arrested by ICE agents. Vargas now also faces deportation and has become the focus of a national debate.

Vargas and her family came to the US from Argentina under a three-month visa waiver program in 2001, which was available at the time. They remained in the country after those visas expired. Vargas’s father was in the process of having his visa renewed at the time of his arrest. Her brother is currently undocumented. Vargas’s parents are divorced; until the raid, she’d been living with her dad and brother in their home in Mississippi.

Because Vargas arrived in the country at the age of seven, she is protected and permitted to remain here under DACA (Deferred Action for Childhood Arrivals), a program put in place by Obama that gives people who arrived here as children a social security number, a work permit, and the right to pursue an education in the US. This type of immigrant is referred to by many as a DREAMer. However, Vargas’s DACA status expired in November of 2016, and because of the $495 filing fee to have it renewed, she was not able to immediately apply for renewal. At the time of her arrest, she was in the process of pursuing that renewal but had technically overstayed her visa.

THIS young woman
GRABBED by ICE out of her house
In MY city
MUSICIAN, TEACHER, hopeful PROFESSOR#DANIELAVARGAS
HERE SINCE 7#badhombres? pic.twitter.com/PoBc1i5IHL

Until recently, Vargas was a student at the University of Southern Mississippi, where she studied math. Because her US visa status has been under DACA, Vargas is not eligible for scholarships or federal student aid. Most of her father’s income went toward her tuition, and she eventually had to take a semester off because her family couldn’t keep up with the tuition bills.

So, let’s fast forward to Wednesday. Vargas held the press conference where she spoke out against the current ICE raids and the actions taken against her family. Then immediately after she was pulled over and arrested by ICE agents. Was this a random coincidence? Probably not.

In a statement released by ICE after the arrest, the agency writes, “US Immigration and Customs Enforcement (ICE) took Daniela Vargas, 22, an unlawfully present Argentinian citizen, into custody March 1, during a targeted immigration enforcement action in Jackson, Mississippi.” The statement concludes by saying: “ICE conducts targeted immigration enforcement in compliance with federal law and agency policy. ICE does not conduct sweeps or raids that target aliens indiscriminately.”

But Vargas’s attorney Abby Peterson thinks there was a hidden agenda behind this arrest. “It could be retaliation,” Peterson tells The Huffington Post. “They had been reading about her in the news, they had seen her at this press conference… [maybe] they didn’t want to hear it anymore. Maybe I’m mistaken on that, but common sense would certainly imply that’s what happened.”

On Thursday, immigration officials told Vargas’s lawyer she would be immediately deported without a court hearing or bond because she overstayed her visa. Until recently, Vargas would have been allowed a trial before an immigration judge, but because of Trump’s recent immigration reforms, which allow for expedited removal, this abrupt deportation process is becoming the new norm.

Trump has claimed that these new immigration reforms are meant to focus on undocumented immigrants with criminal backgrounds, and Vargas has not had prior convictions. Daniela also says that her father has never been charged with a crime here in the US. Her brother only has a shoplifting charge. However, a gun was found in the Vargas’s home when ICE searched their place on February 15. Possession of a firearm by an undocumented person is a felony. So, while the Vargas family were not convicted criminals at the time of the ICE raid, the raid itself unearthed a crime — but that’s not legally the same.

Let’s be real for a sec here. ICE is unlikely to ever flat-out say, “We arrested Vargas because she criticized our agency,” but the severe and swift actions taken by immigration agents immediately after Vargas exercised free speech paint a bleak and frankly authoritarian picture for undocumented immigrants – many of whom are just like Vargas, here through complex circumstances with a clean record.

Somewhat counter to what this case would lead you to believe, Trump’s team recently released memos from the Department of Homeland Security which preserves an Obama-era executive order that protects DREAMers from prosecution.

Trump has also spoken publicly about the DACA program: “To me, it’s one of the most difficult subjects I have because you have these incredible kids, in many cases, not in all cases. And some of the cases, having DACA and they’re gang members and they’re drug dealers too. But you have some absolutely incredible kids, I would say mostly. They were brought here in such a way. It’s a very — it’s a very, very tough subject.”