8 Highlights from Create & Cultivate at SXSW 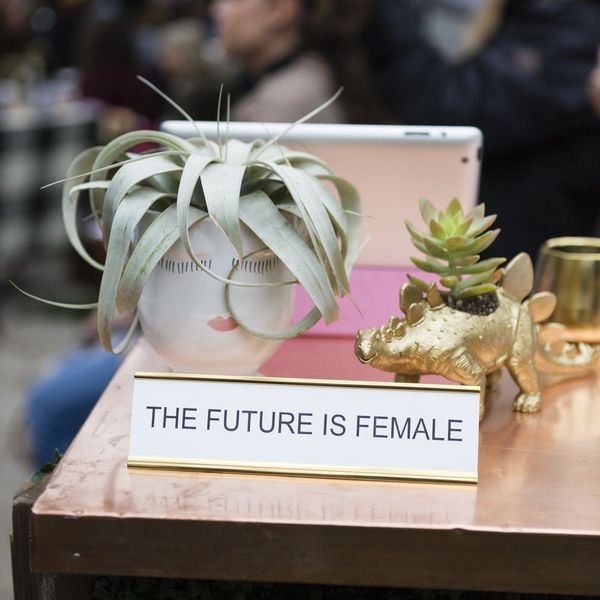 Despite the chilly weather in Austin on Sunday, the Create & Cultivate Pop-Up at SXSW warmed our souls and minds with a full day of events that inspired friendship, life, and career goals. The recurring theme of the day was “We are stronger together,” as women representing all ages, professions, colors, and backgrounds converged to encourage and support one another in all of the ways. Check our eight favorite moments of the day.

1. Empowered and Empowering Panels: The boss group of blogger Nikisha Brunson, ProtectHer founder Alexis Jones, Vox Senior Producer Liz Plank, Sleep Number’s Corporate PR Maggie Habashy, Story co-founder and former OWN co-president Sheri Salata, and Buzz Marketing Group founder Tina Wells chatted about running a business as a woman, focusing on collaboration instead of competition, gender beliefs, and having strong people in your life to remind you just how amazing you are. Plank said, “So many times women are told to act like men, but we never tell men to act like women… we’re failing to see the amazing qualities that women bring into the workplace.” Preach.

2. That La Croix Life: Our favorite sparkling water company had a photo booth made entirely of La Croix boxes (talk about gram-worthy) and kept everyone hydrated with flavored fizzy. And if that didn’t quench your thirst, there was also plenty of Dunkin Donuts coffee and rosé. All day.

3. Hands-On Creativity: In addition to all the selfie opps (because there’s no such thing as too many selfies), there was also a floral hair braiding station from UrbanStems and our DIY necklace stamping station (featuring our own Metal Stamp a Necklace Kit!). For a tech-heavy event, there were plenty of analog activities to get your creativity on.

4. Learning Content Secrets from Our Fave Bloggers: During the Real Time, Right Now panel, bloggers and vloggers Jenn Im, Ashley Rose, Rachel Martino, Nicolette Mason, and Olivia Watson gave us a little peek of what it’s like to create content 24/7 that not only resonates with fans but also lives across multiple platforms. Mason says, “The secret sauce [to engaging content] is authenticity.” She added that people shouldn’t be preoccupied with getting a huge number of followers and that you don’t have to be the biggest, but always “be the best version of you.”

5. Paying It Forward, Tech Style: Model/actress Brooklyn Decker and former CNN anchor Whitney Casey chatted about their new website, finery, launching later in March. An early beta user called it “Cher’s [from Clueless] closet on steroids.” From that description alone, we are here for it. Both Decker and Casey praised women in the tech community for being extremely supportive of each other. Their advice to budding female entrepreneurs to help close the gender gap in tech (94 percent of tech companies are run by men): As you become successful, invest in other women.

6. Hart-y Laughs: Comedians and BFFs Mamrie Hart and Hannah Hart showed that strong women don’t have to be at odds with one another. Mamrie said, “We’re literally two girls with the name Hart who started YouTube channels in the same month about drinking and puns [My Drunk Kitchen and You Deserve a Drink], and we’re still not competitive with each other… There’s room for everyone.” Further proof? The frequent collaborator, gal pal, and third member of YouTube’s Holy Trinity, Grace Helbig, was in the audience as a hype girl and cheerleader.

7. Real Talk: Create & Cultivate founder Jaclyn Johnson and our very own Brit Morin sat down and discussed building successful businesses run by and for women. The two talked about being true to yourself and coming together to support other women’s as well as your own successes. “I don’t think women brag about themselves enough,” said Morin. That’s a habit we should all embrace more.

8. We All Eat Together: Final featured speaker Kristen Bell took the time to talk about a cause near and dear to her heart: social good. The actress and activist co-founded This Bar Saves Lives, a company that, for every snack bar bought, donates food to children in need. “People want to do good,” said Bell, citing the fact that the company gives back as the reason why they’ve been s so successful, recently surpassing two million packets of food donated. The all-around optimist also said she believes that social impact companies are the future of business. Count us in.

Were you at Create & Cultivate at SXSW? Tag us in your Instagram photos @BritandCo!