Is Hilary Duff on Tinder?! The Star Dishes About Her Dating Life 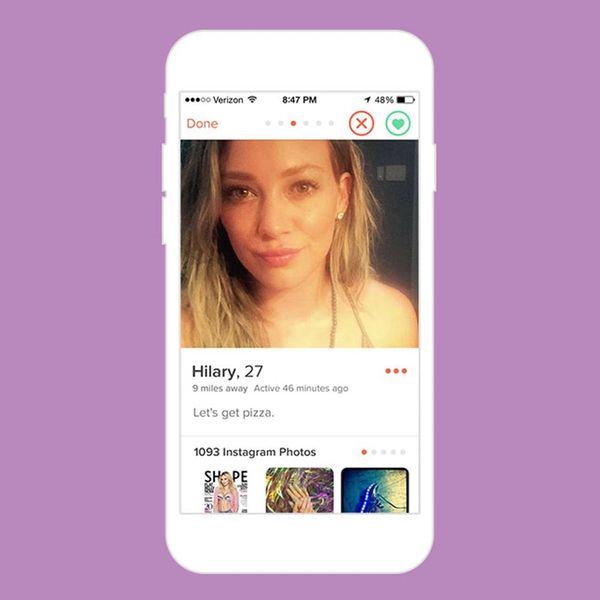 It seems like all the single ladies are turning to Tinder or the handful of other dating apps on the market to find themselves a partner these days — and we mean all. Like, celebrities too. One gal who just admitted to using the mega popular dating app may be a little familiar to everyone: Hilary Duff. As her famous song goes, “Why not take a crazy chance” — right, Hil?

An alleged Tinder profile of the Younger actress has been circling social media over the past few days and Hilary called in to On Air With Ryan Seacrest to set the record straight. Her hair color isn’t the only thing she’s testing out these days. The Duffster confirmed that the Tinder profile is indeed hers on the radio show, while also indulging Ryan in a few more details on her dating life. Hilary shared, “It’s totally me on Tinder. It kind of started out to be a joke with some of my girlfriends. I was like, ‘Explain this whole thing to me because it’s kind of blowing my mind.’ We were swiping and it started out to be kind of a joke and then I was like, ‘I’m gonna join Tinder,’ and they were like, ‘What?! No way you can’t.’ And I was like, ‘Why can’t I? Yeah, I absolutely can.’ I never thought anything was really going to happen. I was talking to a few of the guys and they were really normal.” You’re not alone, Hilary, that’s how we all got sucked into the app — even stars like Katy Perry and Lily Allen have admitted to joining the Tinder-verse to swipe for love.

The talented star told Ryan her first date was at a bowling alley and was more of a group outing, as both of them brought friends along. But she insists her next one, which happens to be later this week, will be a one-on-one affair. “I had my Tinder training wheels on for my first date. Now it’s smooth sailing,” said the 2015 reboot Queen. Check out the full interview here and tune in to Ryan’s show Thursday since she told the host she’ll give him an update on her second Tinder date.

Not into Tinder but want to scope out the rest of the eligible techy bachelors and bachelorettes? There are plenty of apps in the sea — check out our roundup of the best non-Tinder dating apps!

What other celebs have you spotted on Tinder or other dating apps? Share your guesses in the comments.