How a Feminist Catchphrase Sparked a Tattoo Craze 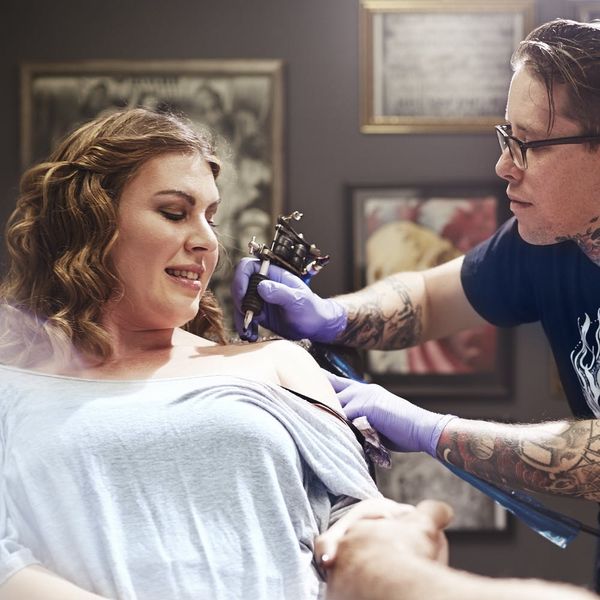 Just this past weekend, Hillary Clinton gave the Democratic party a brand new message of hope and resistance when she uttered the words, “Let Resistance plus persistence equal progress.” Before Clinton’s new catchphrase was sparking buzz, however, came one from the opposing party. Republican Majority Leader Senator Mitch McConnell had no idea of the feminist turn that his words would take when he justified his actions of silencing Elizabeth Warren during her impassioned plea for Republican senators not to vote for US Attorney General nominee Jeff Sessions (who did, of course, go on to win the vote), saying, “She was warned. She was given an explanation. Nevertheless, she persisted.”

Now, the phrase has gone beyond memes, turning into something a little more permanent: a tattoo craze. Earlier this week, more than 100 people lined up outside Brass Knuckle Tattoo Shop to get the quote imprinted on their bodies for life after a Facebook fundraising event began making the rounds on social media. According to the shop’s owner, Shawn Phelps, who spoke with CNN, there were about 150 people in line, and the artists (who worked from 3pm to midnight) had to stop tattooing after 70.

floored that over a 100 people signed up to get a #shepersisted tattoo tonight to support local non-profit #womenwinning. great idea, @noraborealis! drawn by me and tattooed by @emilyapolis and the incredible guys at @brassknuckletattoostudio. mega thanks to @cleverkate for all the organizing and @elizabethwarrenma for inspiring us all. 💖 EDIT: if you're interested in getting this tattoo for yourself, please follow the link in my bio! #persisterhood

The event raised approximately $4,000 for Women Winning, an organization which works to “encourage, support, and elect pro-choice women.” “It was amazing and gratifying to see so many women gathered to support our mission…” the org’s executive director, Lauren Beecham, told the outlet.

100+ women and a few guys waited for HOURS to raise over 4K for #womenwinning ans stock up our local shelters with much needed supplies and eat Girl Scout cookies and hold each others hands and make new friends and oh yeah I guess we got tattoos, too. #persisterhood Art by @chelseabrink (AVAILABLE AT LINK IN BIO) Ink by @emilyapolis Photos by @kyleeleonetti of @kyleeandchristiancreative

Lucky for us, even though we may have missed the event, we can still get in on the action: Brink is willing to share her designs with the world in exchange for a donation to women’s rights. “The whole point was not just to get a tattoo but to make it an active way to get involved and make a difference.”

Will you get a #ShePersisted tat? Share with us @BritandCo.

Nicole Briese
Nicole is the weekend editor for Brit + Co who loves bringing you all the latest buzz. When she's not busy typing away into the wee hours, you can usually find her canoodling with her fur babies, rooting around in a bookstore, or rocking out at a concert of some sort (Guns N' Roses forever!). Check out all her latest musings and past work at nicolebjean.com.
Politics
Politics
Politics Tattoos
More From Politics